Rising from the Ashes.

Share All sharing options for: Rising from the Ashes. 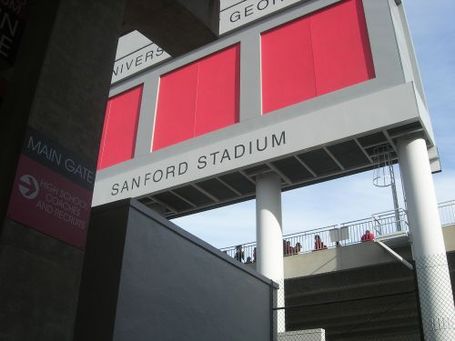 Who can lead Auburn back from the worst beating since 1996?

War Eagle, everybody! It's homecoming week on the Plains. Auburn takes on the Samford Bulldogs, in a game expected to be a tuneup for the Iron Bowl. I'd warn Auburn folks about taking the Bulldogs lightly. I watched quite a bit of their game against the Chattanooga Moccasins on Auburn's bye Saturday. There were no afternoon SEC games that day, but Birmingham's ABC 33/40 televised that game. Amazingly, Ron Franklin and Mike Gottfried were the announcers. Wow, wasn't that a blast from the past? Chattanooga won the game due to Bulldog red zone woes, but that's a pesky offense Samford has. They love quick passes to the flats. I think their slot guy has something like 73 catches so far this season. We all know how Auburn has defended those sorts of plays the past few years. Could be more of a battle this Saturday than anyone suspects.

After the worst Auburn loss to Georgia since a 41-0 beating in 1946, we've observed quite the Tiger melt-down on the message boards and al.com comments sections. Calls for coaches' heads have resumed after a hiatus last season. With 36 playing rotation folks missing from last year's title team, I'm not sure what folks were expecting. As we suspected going in, it's been an up and down year. In my opinion now is not the time to fire anybody. In my book, this staff gets a pass for this year. Things should get better next season. If they don't, well, I think we can hire some pretty good guys for the millions this staff is getting.

One of the more intriguing ideas I came across this week was a little debate on talk radio this week in the Tragic City. For my money, the best of the WJOX radio talk shows is the Roundtable in the early afternoon. On that show, the sports stories are the important thing, not the radio guys' egos. It's refreshing. What the Roundtable folks there asked is, "who should start at quarterback for Auburn against Samford?" My own previously stated belief is that it will make little difference who the quarterback is, if the line doesn't block better and more skill players aren't involved. Still, this an interesting question, and I'd love to see what our great regulars think in the comments! And note: none of this is a call for someone to be benched. We will cheer on whomever the coaches put out there.

I'll make my own cases. After watching this season, I think Barrett Trotter and Clint Moseley are both capable of playing winning SEC ball, IF they are given time to throw. Probably the worst knock on Moseley is that he has two pick-sixes, to Trotter's one, and he's played fewer minutes. Both guys started strong, then when the pressure came, there were mistakes. Neither guy has been able to rise above his teammates' flaws, nor raise them to the next level. Breaking the two down, I think Moseley is a couple of inches taller, is slightly faster, and has a stronger arm. Trotter has (maybe) an experience edge. From a pure stats point of view, Moseley has a big edge. (HT Auburntigers.com)

Obviously, neither guy is going to win a footrace. Trotter's averaging one yard per carry, and Moseley is sitting at negative 4.8.

The most interesting suggestion was to start Kiehl Frazier the next two games. Many folks have opined that the Malzhan offense won't work without a running quarterback. (That's despite evidence to the contrary with Chris Todd...) Frazier has 216 rushing yards on the season and a 4.5 yard per carry average. The idea would be to go ahead and try to get Frazier as much experience as possible, as he might be the future of the program at quarterback.

The case against Frazier is this: He's tried all of three throws down the field this season. Two were intercepted, and the other was way underthrown towards a wide open man, and batted away. And Frazier has not seen much of an SEC pass rush. Folks are still surprised when he drops back. I have little doubt that Kiehl Frazier could put up some interesting numbers against Samford. But he has not faced a pass rush or a blazing secondary like he would see in the Iron Bowl. Putting Frazier out there against Bama on Thanksgiving Weekend would not be a kindness, nor would it help Auburn keep it close. Most importantly, I think it would be of little benefit going forward, and there's certainly the possibility of injury or a fatal blow to one's confidence.

My vote is to stick with Clint Moseley and get him as many reps against Samford as possible. He's seen LSU's defense, and that of UGA's Todd Grantham, which is playing pretty well of late. If nothing else, Moseley knows how fast it's all going to be coming at him, and he's been the guy for a few weeks. Unless Trotter has shown something in practice that wasn't there in late September and October, I think that's how it has to go. I have confidence that coaches Chizik and Malzhan will make whatever move gives us the best chance going forward. I've never really doubted that.

This Samford game is a chance to work out some kinks on this team. With the loss of veteran corner T'Sharvan Bell to a knee injury, it's audition time at cornerback. We've got some exciting choices, but they'll have to step up and claim it. Based on what I've seen in the games I've attended, I like Jonathan Mincy's physical approach. I think he's got the inside track to earn an Iron Bowl start.

This week is also a chance for some receivers to step up and make a statement. We'll need more than Blake and Lutzenkirchen available against Bama. We've heard bragging from Trooper Taylor every week for the past month on an "expanded role" for Trovon Reed in the receiving corps. The only expanded role we've seen thus far is on the "missing persons" list. Personally, I think when Trooper's lead quotes are are about "limping on your own time," and Cadillacs being out of gas, he's not happy with his unit.

Here's hoping for a happy homecoming for the Tigers. I know the show with Pat Sullivan and the great Auburn players from circa 1970 will be special. This bespectacled kid at ten years old wanted to BE Terry Beasley, but alas, it wasn't happening. We'll have our usual open thread up at TrackEmTigers.com. My own plans are still up in the air. I don't have digital cable, so PPV is out. I might be able to finagle a way to watch on ESPN-3. I've got two party invites. And my son's playing a pretty tough tennis tournament this weekend. Where I'll end up during gametime is still undecided. Whether I do a play by play or not, I'll try to get in where I can and offer noisy commentary! And, I'm DEFINITELY at the keyboard for the Iron Bowl! War Eagle, and let's stomp Samford!