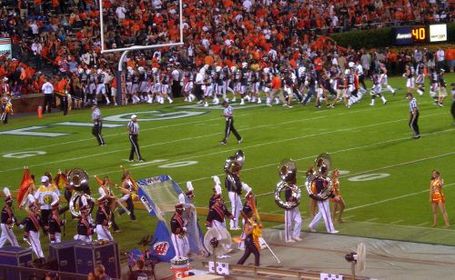 And the band played on.

War Eagle, everybody! It's homecoming on the Plains! Today, the Auburn Tigers will take on the Samford Bulldogs at Jordan Hare Stadium. The game starts at 12:00 noon, Central Time. It's only available on TV via local pay per view. It's not even on ESPN-3. Today, it will be radio only for this Tiger. I'll likely be out of pocket till the 4th quarter of this one.

It should be cool day for football in Auburn. It's cloudy and in the mid 50s right now, but the sun should break out around game time. With the partly cloudy skies, there is a slight chance for a shower during the game. The mercury should reach the mid-60s toward the end of this one.

Today's a special one at Auburn, as it's the 40th anniversary celebration of Auburn's first Heisman winner, Pat Sullivan, who is coaching the Samford Bulldogs. They'll have "Sullivan to Beasley" playing on the big screen once again, and there will be magic in the air! It's amazing to think that Auburn has produced three Heisman trophy players, the most in the SEC.

As always, feel free to drop in and join the fun on this thread. This is another valuable opportunity for these very young Auburn Tigers to gain experience. We're only a week away from the Iron Bowl, can you believe it? Seems like football fall goes by faster every year! War Eagle, and let's beat those Bulldogs!