Tigers Wear Down the Bulldogs!

Share All sharing options for: Tigers Wear Down the Bulldogs! 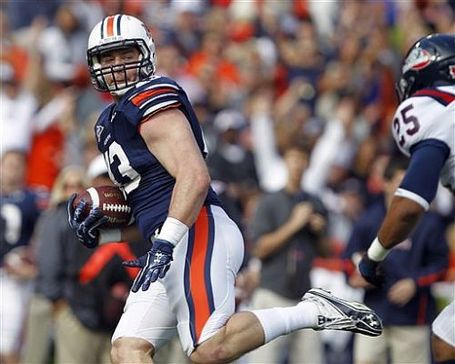 War Eagle, everybody! It's time now for the Acid Reign report on Auburn's Homecoming bash against the Samford Bulldogs. The Southern Conference foe gave Auburn all the fight the Tigers wanted, but Auburn pulled away with two 4th quarter scores to get the win, 35-16. For Samford, it was yet another day of red zone woes. The Bulldogs got a single touchdown early in the 2nd quarter on a blown Auburn coverage, but could not crack the end zone again. The Auburn Tigers won their 7th game of the season ensuring a bowl game for the 11th time in the past 12 years.

Despite holding Samford to only one touchdown, defensive coaches can't be happy about giving up 338 yards to an FCS team. Samford's offensive line only averages about 285 pounds per man, but they managed 149 rushing yards against the Tigers. Freshman running back Jeremiaha Gates put up 119 rushing yards, and the Tigers did not manage a single sack. The bright spots for the defense were a pair of interceptions by Neiko Thorpe and Ikeem Means. On the Means interception, freshman Erique Florence managed the unlikely feat of drawing flags for two different illegal blocks, over 50 yards apart.

It was another typical day at the office for the Tiger special teams. Cody Parkey missed a short field goal attempt, but he was a touchback machine on kickoffs, adding 4 more to his incredible season total of 31. Steven Clark continued to hit towering punts that could not be returned. Clark pinned the Bulldogs inside their own 20 on 3 of his 4 punts. Samford had lots of kick and punt coverage issues. They were trying short kickoffs, but Onterio McCalebb made 'em pay with a 45 return that set up the icing score. Quan Bray got loose for the first pair of back to back double digit punt returns in the Gene Chizik era.

The Auburn offense continues to be mired in a slump. The line's communication problems got worse when veteran tackle Brandon Mosley left with a leg injury. For three quarters, our guys could not move Samford's front. Auburn's perimeter blocking was ok at times, and Michael Dyer was just too much of a load for Samford's defense. Dyer had a 157 yard day, moving into Auburn's top 10 career rushing list. That's a mighty impressive feat for a young man who's not yet through with his sophomore year. Clint Moseley made some good throws, and some bad throws. He's still got a tendency to lock in on Emory Blake and Phillip Lutzenkirchen, but did find Quindarius Carr wide open a few times. No one's been able to stay with Carr the past few games in coverage. It's nice to see him finally getting a few looks.

Defensive Line: D. This unit lost more battles than it won with an FCS squad. Total for the day included only a single Gabe Wright tackle for a loss, and no sacks.

Linebackers: B. With the line losing battles up front, Auburn's undersized linebacker bunch takes a beating. With Jonathan Evans out, Eltoro's the biggest starter out there, at only 228 pounds. Luckily, Samford's skill guys aren't SEC sized. Darren Bates was much more of a force this week, with 12 total tackles and a pass breakup. Eltoro Freeman added 2 pass breakups. I had just about given up on any of the Auburn linebackers being much use in coverage. It was good to see Jake Holland back in the lineup later in the game. Freshman linebacker Justin Garett looks like he's going to be a good one. Samford tried to pick on him, and he held up pretty well.

Secondary: C. Scouting the Samford Bulldogs, you knew that they were going to try to get the ball to the speedy Kelsey Pope. Auburn could not stop him from getting the ball, as he recorded 13 catches, and added a 12 yard rushing attempt. Auburn did limit the damage, as Pope only managed 6.9 yards per reception. Pope scored Samford's only touchdown on a pick play that featured a missed Auburn assignment. Gotta swap men on those things.

Punting: A+. Steven Clark's shortest punt on the day was 41 yards, and 3 of 4 were pinned inside the Samford 20. All were tall punts, and none were returnable. Great job!

Punt Returns: B. Quan Bray did let one ball hit and roll, but otherwise he had a good day. With a bit of room to run, Bray had 2 returns for 37 yards. The 24 yarder was a particularly impressive tackle-breaking effort.

Kick Returns: A. We didn't score, but Auburn had good field position after almost every Samford kickoff. Bulldogs adopted a strategy of kicking off short, and towards the sideline. At first, it was upback Craig Sanders snaring one. Then Samford kicked one out of bounds. Auburn moved McCalebb and Bray up, and got a 45 yard return out of that. Samford did kick it over everyone's head the last time for a touchback, but Auburn decisively won this battle.

Place-kicking: B. I've got to count off a letter grade for missing from the 22 yard line, but Cody Parkey's kickoffs continue to be a weapon. 31 of Parkey's 55 kickoffs this season have gone for touchbacks.

Offensive Line: D. Things aren't going well when it takes the team till the 4th quarter to start getting a push against Samford. The coaches were so frustrated that they went to calling iso plays from under center in the 4th quarter. After Brandon Mosley was injured, Auburn was playing with 3 freshmen on the line: Reese Dismukes, Chad Slade, and Eric Mack. Maybe that will pay off down the road.

Running Backs: B. I'm counting off a letter grade for the second fumbled handoff in as many weeks. We've got to get back to holding onto the ball. Auburn backs did a good job running with the ball in traffic, and played pretty well without the ball. Phillip Lutzenkirchen is playing really well as a lead blocker, and is a threat to score downfield.

Receivers: B. Samford was determined not to let Emory Blake beat them, and they doubled him every time he was on the field. Like the Georgia game, other guys were running free much of the time. Trovon Reed returned to the lineup, and led the Tigers with 4 catches. Where I counted off was blocking. We ran a good many quick screens, and it seemed like the blocking wide receiver hardly ever handled their man. Auburn averaged 8.5 yards on 6 quick screens. And that includes one with poor blocking that Reed reversed field on, and picked up 20 yards.

Quarterback: D+. We had guys open on Samford all day. If they are not wearing number 80 or 43, we're really hesitant to throw it down the field. There were two deep bombs that Clint Moseley tried to stuff down the middle into double coverage, when Carr was all alone in the corner of the end zone. Moseley also had a tendency to throw high on 3rd down. I did enjoy seeing Clint scoot up the middle for a 22 yard touchdown. We'll call it a great zone-read. Might have been more of a broken play, but we'll take it! I took a letter grade off for a wildcat fumble by Khiel Frazier.

In a year where Phil Steele picked Auburn last in the SEC West, the Tigers now have seven wins, and will finish in 4th place regardless of what happens in the last week of the season. It wasn't a thing of beauty, but Auburn gained more valuable experience on Homecoming vs. Samford. There's no substitute for experience, and this was another week of putting in the hours. We have loads of talent coming back next season, and we'll build on these tough battles this year.

Now, all eyes turn to the Iron Bowl. This time a year ago, no one thought that Bama had a prayer of slowing down Cam Newton. Most folks thought Auburn would win, it was just a question of by how big a score? That's what all the expert talking heads are saying this year about Alabama's chances. Remember last year that Auburn ran into a buzz saw and trailed 24-0. Alabama is the one coming into a hostile situation this year. It's Iron Bowl week! The better team usually wins, but it's rarely easy. I expect these Tigers to get after it this week, and have their best performance of the year this Saturday! War Eagle! Beat Bama!