Can Auburn Match Up in the Iron Bowl?

Share All sharing options for: Can Auburn Match Up in the Iron Bowl? 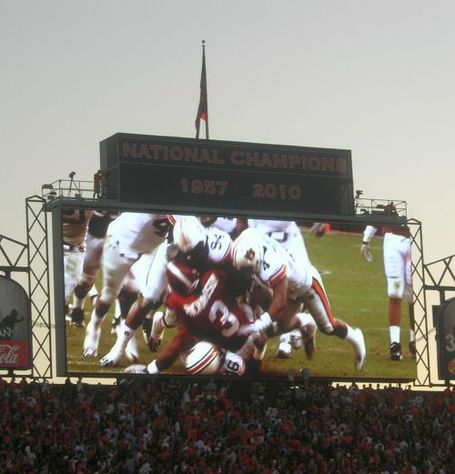 War Eagle, everybody! We're almost to the biggest day of the year in Alabama! Tomorrow is the Iron Bowl, at 2:30 PM Central Time on CBS. As usual, bragging rights and titles are on the line. With a big enough win over Auburn, and an LSU loss today, Alabama could make it to Atlanta to play for the SEC Crown, and a BCS title opportunity. For Auburn, it's a chance to obliterate the Tide's chances, and pull a legendary upset. Few give Auburn any chance in this game, but you can't tell that to the Auburn players. We expect Auburn's best effort of the year tomorrow in Jordan Hare Stadium.

Losing an Iron Bowl would not be a fatal blow to Auburn head coach Gene Chizik. Every coach Auburn has had since the 1940s has lost Iron Bowls. What's tended to be trouble in recenter years is big losses in that game. Back in 1998, interim coach Bill Oliver was told that he was auditioning for the permanent job. In the Iron Bowl, Oliver's team blew a 17-0 lead, and gave up 31 unanswered points. Some folks will say the Tuberville deal was done before that, but it's likely the poor Iron Bowl showing made the decision a lot easier. Tommy Tuberville's honeymoon in Auburn ended abruptly in 2001, when a 7-2 Auburn team was blown out 31-7 in the Iron Bowl by a 4-5 Bama team. Thereafter, there was always a vocal faction that never forgave that showing. There's little doubt that Auburn's 36-0 loss in the 2008 Iron Bowl was a major factor in Tuberville's "resignation." If Auburn loses big tomorrow, could Gene Chizik be on the hot seat?

Just for fun yesterday, I pulled up my preseason Iron Bowl predictions. Some of it is spot on, some of it is laughable in retrospect. I had Alabama pegged to improve on defense from 2010. I did not expect as much as the Tide D has delivered this season. Alabama is giving up only 8.4 points per game, and less than 200 yards. That's amazing in this day and age.

I had concerns about the Tide's special teams, particularly the kickers and punter. Bama is decidedly average punting, and kicking off. The kicker combo of Shelley and Foster has only hit 16 of 27 field goal attempts. The Tide had improved in kick coverage, till Georgia Southern ran a 3rd quarter kickoff back for a score last week. The bright spot for Alabama on special teams has been Marquis Maze. He's been a weapon both on kick and punt returns.

I've read quite a bit in recent weeks about Alabama's supposed offensive woes. Maybe I'm too old school, but I think a team that puts up 35.5 points per game and 436.7 yards in the SEC West has to be pretty good on offense. The most common target for complaints is quarterback A. J. McCarron. "Holds the ball." "Won't go downfield." I see a guy who's hit 65 percent of his passes, for 13 TDs, only 5 interceptions, and 8.1 yards per pass. He's got 4 different receivers who have more than 20 catches on the season, and 7 different Bama players have touchdown receptions. Those are winning numbers, especially with as powerful a ground game as the Tide has.

Revised Unit Matchups after the jump!

Auburn defensive line vs. Alabama offensive line: I had this matchup pegged as even prior to the season. It was Auburn's numbers vs. Alabama's experience. I figured Auburn's linemen would get better and better as the season progressed. Instead, they've been more and more beat up. Attrition at defensive end has been horrendous. The only thing that might work in Auburn's favor is that Bama left tackle Barrett Jones is coming off an injury, and has missed the last two games. That matchup against Corey Lemonier, Auburn's most dangerous D-lineman bears watching. I'm hoping Auburn's line from midseason, say, the Florida and South Carolina games shows up for this one, not the line from the Georgia and Samford games. Advantage: Alabama.

Auburn linebackers vs. Alabama backs: This is a matchup I had seen as even before the season, and I still think that's the case. The real concern is how well Auburn's outside linebackers can handle blocks from Bama tight ends Brad Smelley and Michael Williams. At times, Auburn's Darren Bates has been overwhelmed on the strong side, particularly against LSU and Georgia's heavy sets. Bottom line is that Auburn is giving up 4.4 yards per carry, and Trent Richardson is averaging 5.8. I think in the biggest game of the season, Auburn's linebackers will elevate their game. Advantage: Even.

Auburn corners vs. Alabama receivers: The big question I had here was whether Alabama could replace Julio Jones or not. Marquis Maze is the Tide's leading receiver, with 52 catches, but only has 11.7 yards per catch, and just a single receiving touchdown. Auburn has indeed fielded a variety of fast, talented corners this season, but there have been some rookie errors. Auburn's most experienced corner, T'Sharvan Bell, is out with a knee injury. Advantage: Even.

Auburn safeties vs. Alabama secondary receivers and quarterback: I expected this to be a critical matchup, and I expected that relative inexperience on both sides might be a factor. Would Auburn be able to force A. J. McCarron into some mistakes? Would Auburn blow coverages at safety? At this point, I don't think either scenario will be a big factor. McCarron rarely tries to throw into coverage, and Auburn's safeties have been pretty good in coverage. Advantage: Even.

Punting: I had this being an Alabama advantage before the season. We had no idea that Steven Clark would have the kind of year he's having. Also, Auburn had fielding problems the prior two seasons. Bama has done about as predicted. Mandel doesn't consistently kick 'em 40 yards, but Bama covers well. Marquis Maze has been good as a return man. For Auburn, Quan Bray has been able to avoid turnovers, which is a big improvement. Steven Clark is a Ray Guy award finalist, averaging 40.4 yards per punt. That's not a great average, but only 8 of 64 punts have been returnable. If Clark can take Maze out of the equation, and I think he can, it's Advantage: Auburn.

Kickoffs: Before the season, I thought Auburn was a little better in kick coverage, and had a better return game. Coverage has slipped, and blocking on returns has gone downhill for the Tigers as the season progressed. Bama posts solid, unspectacular numbers on kick distance and coverage. Maze has been a couple of yards better on returns than the Auburn duo of Onterio McCalebb and Tre Mason. Where Auburn is head and shoulders better is on kick distance. Cody Parkey has 31 touchbacks on the season. Bama's Cade Foster has 3. Advantage: Auburn.

Place kicking: This is another area where I felt Alabama had a big edge on experience. Auburn's Cody Parkey has had a solid year, hitting 11 of 15 attempts. His only miss inside 40 yards came against Samford last week. Bama's Jeremy Shelley is reliable, having hit 14 of 18 on the seasons, with only 2 misses inside 40 yards. Where Bama has struggled has been on long range kicks. Shelley is 0-2 from downtown, and Cade Foster is only 2 of 9. Advantage: Auburn.

Auburn offensive line vs. Alabama defensive line: This was another area I figured the two teams matched up evenly. Instead, Alabama has been better than expected, and Auburn has struggled with injuries and personnel changes. If there's any silver lining for Auburn, it's that Bama nose guard Josh Chapman has been playing banged up lately, and missed the Georgia Southern game. One other item of note has been that Auburn has played dramatically better on the line at home. In road losses, communication has been a huge issue, and Auburn has consequently managed only 10 offensive points per game in SEC road losses. At home, the Tigers pick up assignments a lot better. The Auburn line must continue to play well at home, because Alabama will move folks around on the front to try and confuse things. Advantage: Alabama.

Auburn backs vs. Alabama linebackers: I had this pegged as a Bama advantage before the season, and see little reason to change it. Most of Alabama's linebackers are bigger than Auburn's defensive ends, and can match Michael Dyer in speed. Auburn 3rd and longs will be huge. Auburn's 3rd down back is Onterio McCalebb, and he'll be trying to block Courtney Upshaw and Dont'a Hightower, both of whom outweigh McCalebb by about 80 pounds. Advantage: Alabama.

Auburn receivers vs. Alabama corners: Due to Auburn's inexperience, I had this down as an Alabama advantage. With a mid-season injury to Emory Blake, the Auburn outside receiving corps all but disappeared. Alabama has been downright nasty at corner. Not only are they fast, but very physical. Auburn needs a good game from Blake and Trovon Reed to have a chance in this game, and Auburn's other receivers must have the game of the season blocking those quick screens. Advantage: Alabama.

Auburn secondary receivers and quarterback vs. Alabama safeties: I really expected an explosion of Auburn secondary receivers this season, and it has not happened. Phillip Lutzenkirchen has been great, but we can't use him too much in the passing game, without getting our quarterbacks killed. Auburn quarterback Clint Moseley makes only his 5th career start against Alabama. Alabama's safety group, led by senior Mark Barron has been very solid this season. Advantage: Alabama.

I'll be honest. I'll be shocked if Auburn gets 300 yards on offense. Bama is that good on defense. What Auburn has to do is avoid turnovers, and take advantage of small Bama errors. Hopefully, Gus Malzhan will have a few magic big plays we can hit 'em with.

On defense, Auburn has a chance if they can match up on the line. If Auburn can make McCarron throw on 2nd and 3rd downs, it's a much more even game. What I'd do if I were Bama coordinator Jim McElwain is first see if Auburn's ready up front. If Richardson and Lacy can bang out 5+ yards a carry from the get go, there's no reason to risk anything fancy. If Auburn slows 'em down, some first down quick passes would be the way to go. Spreading Auburn out last season worked very well, but Auburn has more able coverage men this season.

Where Auburn will have to win big is on special teams. Auburn must out-punt the Tide, keep them backed up, and break a few big returns. Cody Parkey must hit his kicks. I believe Auburn special teams may be one of the keys to winning this game.

The biggest factor in this game will be in the trenches. It's very simple. Auburn must match up to have any chance in this one. If Auburn can't hold the lines, this will likely be a lopsided loss. It's time now for a very young bunch of Auburn linemen to take a giant step forward, and beat Bama!