Share All sharing options for: Tide Rolls the Tigers. 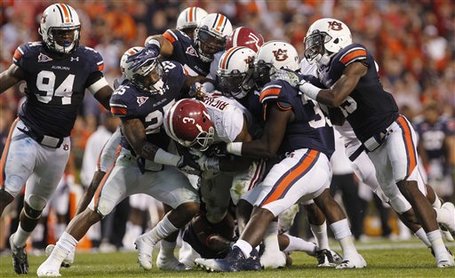 There were few bright spots in this year's Iron Bowl.

War Eagle, everybody. It's time now for the Acid Reign report on Auburn's 42-14 loss to Alabama in the Iron Bowl. Despite a lively, loud home field advantage in Jordan Hare Stadium, Auburn could not get it done against a powerful Alabama squad. There is one thing to be proud of in this one, the Auburn football team never quit, and they played their hearts out till the end.

I'll leave debates and questions about possible Auburn coaching changes for another time, but I'd like to address one thing here, at least from my viewpoint. Much has been made in on the message boards about a possible defensive strategy issue between defensive coordinator Ted Roof and head coach Gene Chizik. It is said that Ted wants to play man to man and blitz, and Gene won't let him, because Gene is a Tampa-2 defensive coach. Folks, in this day and age, no one runs the same scheme every play. And if we were playing Tampa-2 most of the time, you'd see Jake Holland or Eltoro Freeman dropping back into a deep centerfield zone on those plays. (If anything, we haven't dropped into that enough due to weakness in the front seven against the run, in my meaningless opinion...)

The fact is that coordinators blend coverages, trying to show the offense one thing, while actually being in something else. Auburn didn't play any Tampa-2 coverage AT ALL, in this Iron Bowl. Standard cover-two was used only sparingly. Auburn manned up with cover-3, cover one, and more cover zero than anything against the Tide. This allowed the Tide to use underneath pick plays to the tight ends, rubbing inexperienced Auburn safeties off. Auburn played 9 in the box most of the day, trying to plug all running lanes for Richardson and Lacy. Till the defense got tired in late in the 3rd quarter, that mission was accomplished. Once the young, undersized front seven had played 35-40 snaps, Bama started rolling over them.

The Alabama offensive line won the battle of the trenches, as they held the line and gave A. J. McCarron time to throw. Alabama's run game didn't go anywhere for a while, due to pretty much the entire Auburn defense playing the run from close in. It cost Auburn dearly in the passing game. Alabama knew that Auburn had capable corners on each side, so they did little on the outside, only hitting Marquis Maze and Brandon Gibson on a few quick screens. Bama also hurt Auburn a couple of times slipping a third wide receiver out there, Kenny Bell. He was a mismatch against safeties trying to stop the run, getting wide open for Bama's first score of the game.

The Auburn special teams needed a great day to give Auburn a chance in this one, and except for one play, they delivered. The one bad play was a ten yard punt in the first quarter, that went out of bounds at the Auburn 35 yard line. Bama promptly hit a wide open tight end for a 14-0 early lead. Other than that, Auburn punted well, killing Bama inside their own 20 3 times, and allowing negligible return yardage. Cody Parkey parked all three of his kickoffs for touchbacks, no returns. Bama could not consistently kick the ball deep, and Onterrio McCalebb made them pay with one kick return for a score, and another for 38 yards to give Auburn good field position.

The Auburn offense continued its woeful ways against ranked opponents. There were a few good moments for the offensive line, but more often they were confused any time Bama showed the least little shift or stunt. Alabama showed way more blitz than they actually came with, and many plays featured only a 3 or 4 man rush. Despite that, you'd see one or more Bama guys immediately in the backfield, and two or three Auburn linemen idle, with no one to block. I think the coaching staff needs to take a good hard look during the offseason at how we're communicating line calls.

Auburn ran a number of quick screens, but Bama closed those down pretty well. The blocking receiver on those was generally ineffective. Downfield passing was disastrous. We had one successful 15 yard throw to Phillip Lutzenkirchen, and that was it. There were several sailed passes, one of which was returned for a score, a couple of tries into double coverage, and dropped ball by a wide open receiver on a short crossing route.

For the most part, Auburn tried few pure power plays right at Alabama. There was some success when we'd catch them off guard, but more were stuffed. The Tigers ran more Wildcat and zone read plays than anything. The wraparound draw was completely ineffective this game. Auburn picked up around 40 yards rushing in the final quarter, but Alabama was substituting freely with a big lead late in the game. For the game, Auburn gained only 140 yards, turned the ball over twice, and managed just 2.5 yards per play.

Defensive Line: D. The Tiger line did manage two tackles for a loss, and one forced fumble for an Auburn touchdown. Passing grade for that. However, they had a lot of help from the entire linebacker corps crowded up to the line of scrimmage. Other than one play where A. J. McCarron held the ball too long and fumbled, Auburn managed no sacks and no quarterback hurries.

Linebackers: C-. The starters played a lot of snaps, and limited the Tide rushing game for a while. Darren Bates had ten total tackles, but could have used more help from the other two. On a day when Trent Richardson had 27 carries for 203 yards, the Auburn starting linebackers managed only 17 total tackles. Linebacker help in coverage was non-existent, and I think that was by design.

Secondary: D. If we're going to play man coverage, we have to learn how to stay with guys when they cross up and set picks. And we have played a lot more man coverage the second half of the year, make no mistake. I counted off a lot for repeatedly turning tight ends and slot receivers loose. In this game, 3 of the top 4 tacklers were in the secondary, and 4 of the top seven. Neiko Thorpe led the secondary with 9 tackles, before leaving the game with an injury.

Punting: B. I counted a letter grade off for the shank in the first quarter. Taking that out, Steven Clark managed 50.2 yards per punt, and killed 2 of 4 inside the 20. Bama's Marquis Maze had 2 returns for 21 yards, but they had to block in the back to do it. Clint Moseley added a 39 yard quick kick that was brilliantly killed by Onterio McCalebb inside the Bama five yard line.

Kick Returns: B. Bama really mixed up their kickoffs. Some were deep, and some were not. I counted points off for Bray and McCalebb letting a couple of them hit the ground inside the five, and roll through the end zone. Those could have been dangerous with different bounces. Auburn handled the short kicks well, with McCalebb speeding up and taking one to the house. Craig Sanders and Chris Davis pancaked the outside contain on that thing.

Place-kicking: A+. Cody Parkey hit both of his extra points, and nailed all three kickoffs for touchbacks. It's a pity we didn't give him more opportunities.

Offensive Line: D-. It took till the 4th quarter for Auburn to get much of anything going on the ground, and Clint Moseley rarely had time to throw. Bama posted 2 sacks and 6 tackles for loss, and they did it with few blitzes. At times, Moseley had a good pocket, but with a three man rush, it should not be hard to hold a couple of double team blocks a few seconds. The telling moment of the day was when Auburn went for it on 4th down, with a super-jumbo set and a direct snap to Michael Dyer. To a man, the line went backwards on that play like a bulldozer had run over them.

Running Backs: C. The Auburn running backs had a total of 21 rushes for 64 yards, no scores, and one very costly mishandled pitch that killed a promising drive. Phillip Lutzenkircken contributed a couple of good catches out of the backfield and a couple of good blocks, but he was largely used as a decoy. Bama followed him all day with a lot of defenders, and where Auburn had some limited success running was with misdirection away from power.

Receivers: C. I counted a letter grade off for a dropped pass by Trovon Reed, and another for poor blocking on quick screens by everyone. Quindarius Carr and Travante Stallworth were open at times, but Bama blanketed Emory Blake. Even with some receivers getting open, Auburn never showed the ability to get the ball to them.

Quarterback: F. Granted, Clint Moseley faced a lot of pressure in this one. But as he said in the locker room afterwards, "when a quarterback's best play is a punt, you're in trouble." Moseley lost a fumble, threw a pick six, and tried to take off on long yardage and run several times. There were a trio of high throws into coverage. The only thing that was working for Clint in this game were the quick screens, and Bama was having none of that. Tough day.

This 28 point loss goes down as Auburn's worst beating in Jordan Hare since a 41-7 loss to Nebraska in 1982. Auburn did lose to Florida State in Auburn by 28 in 1987, in the only defeat of that year. This year, Auburn has been blown out by 21 or more points 4 times, all by teams with ten or more wins on the season. It's been a tough year, but the Tigers did earn a bowl trip, likely to Atlanta for a rematch against the Clemson Tigers, who like Auburn have slid since the last meeting. It will be interesting to see who regroups more ably over the Christmas break.

It's great to be an Auburn Tiger. We'll watch the offseason moves and recruiting with great interest this year. It's a pivotal year coming up. Will Auburn return to the ranks of the elite, or have three years of mediocrity out of the last 4 become the norm? This coaching staff must stop the bleeding, and repair the holes. The Auburn faithful will be watching. War Eagle!