How Much Do Bye Weeks Help Auburn?

Share All sharing options for: How Much Do Bye Weeks Help Auburn? 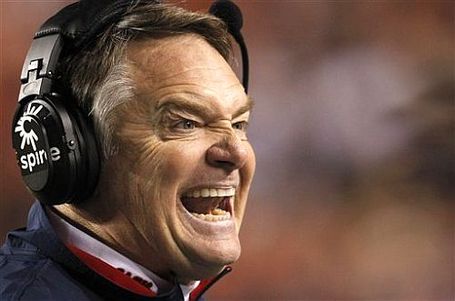 I wonder if they'll be selling Houston Nutt Halloween masks, next year?

War Eagle, everybody! Yes, I know that picture above has nothing to do with my post. It was too good not to share! One of the highlights of my trip to Auburn last Saturday was watching Houston Nutt pace the sideline like a caged animal. We SEC fans have enjoyed 14 years of watching his antics. The league will be poorer for it, if this is his last year.

This week's subject is the bye week. For purposes of this piece, I'm only going to examine the period of time covered by the 12 team version of the SEC. In other words, the last 20 years. In 1992, the Tide and Tigers were forced by their TV overlords to play on Thanksgiving Day. Thereafter, both schools set their schedules up for an open date after the Iron Bowl. Alabama and Auburn were thus left with only one bye week during the season. Since the college football world went to the 12 game regular season, that's now the case for every team. About 3 years ago, the SEC mandated that all SEC teams must have a game scheduled the last week of the season.

Looking back on the past 20 years, I'm going to look at each Auburn bye week, and then at what transpired in the next game.

In 1992, Auburn effectively had two bye weeks. The first came after a 24-24 tie against Arkansas. Auburn had a week off before hosting Georgia. The Tigers had opened the season 4-1, but had stumbled through October to a 5-3-1 mark. Auburn played Georgia tough, falling 10-14, with the ball on the UGA one yard line with no timeouts. That UGA team ultimately won 10 games. After the UGA game, Auburn had ten days off before the Thanksgiving Iron Bowl. Auburn battled eventual national champ Alabama to a scoreless deadlock at the half, before a pick six put the game out of reach. Auburn wilted late, losing 0-17. Verdict: The bye weeks helped Auburn regroup and play top ten teams tough.

The 1993 team ripped out to a 7-0 record before an October bye week. The bye came after a hard-fought 38-35 win over Florida. The rested Tigers fought a battle in the snow in Arkansas, rolling over the Razorbacks in the 4th quarter for a 31-21 win. Verdict: Auburn was the fresher team in Fayetteville due to the bye.

A nearly identical scenario occurred in 1994. Auburn beat Florida in Gainesville to go 7-0, then had a bye week. At home against Arkansas, the Tigers looked positively frazzled in the first half, trailing 3-7 at the break. The Razorbacks collapsed in the 4th quarter, giving up 3 Stephen Davis TD runs late, as Auburn won 31-14. Verdict: Maybe Auburn had a little more gas in the tank at the end due to the bye, but they sure didn't look sharp for 3 quarters. Inconclusive.

Things fell a little differently in 1995. The Tigers had just hit a serious pothole in Baton Rouge before the bye week, losing 6-12 to LSU. After the September bye week, Auburn took on the "much improved" Bill Curry UK Wildcats, and tore out to a 35-7 halftime lead, en route to a 42-21 win. Verdict: The bye week was invaluable teaching time for the offensive line, which had been manhandled by LSU.

In 1996, the bye week again fell after LSU. At the end of the barn-burner game, Auburn stood at 3-1. The D had largely shut down Auburn's first 4 opponents, with shutouts against UAB and Fresno, and even in the 15-19 loss to LSU, offensive turnovers had led to most of LSU's points. After the bye week, Auburn was diced up pretty good by the USC Gamecocks, and only managed 228 total offensive yards in the game. Somehow the Tigers came from behind to win 28-24, but it was not a pretty game. Verdict: Auburn regressed during the off-week.

Auburn played 9 straight games till the off week in 1997. In week 9, the Tigers appeared completely out of gas in a 0-20 loss at home to Mississippi State. After the bye week, Auburn roared into Athens, Georgia, and put up a dominating 45-34 win over the Bulldogs, en route to the first Tiger SEC Title Game appearance. Verdict: The bye week helped a thin Tiger team get their legs back under them.

There was much to forget about the 1998 season. Auburn's bye week came early again, after a 19-31 loss to LSU. After the bye, Auburn hosted defending SEC Champ Tennessee. Tigers roared down the field with an energy seldom seen that season, but fumbled the fall for a 90 yard UT score the other way. Auburn lost to the eventual national champion 9-17. Verdict: The bye week helped, as the defense looked much improved against UT and teams beyond.

In 1999, Auburn was back to having a bye week after Florida. Auburn had started the season impressively enough, but had dropped 4 straight games with starting quarterback Ben Leard on the sideline with a separated shoulder. After the bye week, Leard returned against Arkansas. It didn't matter. If anything, the Tigers looked worse after the rest. Auburn got drubbed by Arkansas 10-34, and Leard was out again with a concussion. Verdict: Bye week was no help whatsoever.

Auburn again went 9 straight weeks till the bye in 2000. Tigers looked out of gas late against Arkansas in game 9, but hung on for a 21-19 win to run their record to 7-2. After the bye, Auburn hosted Georgia. Georgia looked like the better team, but Auburn had a reserve of energy, and would not stay down. The game went to overtime, where the Tigers and Rudi Johnson bashed down for a winning Leard sneak, 29-26. Verdict: The bye week rested the Tigers enough to knock off UGA and Bama and head back to Atlanta for another SEC Title game.

The 2001 season had two bye weeks, one scheduled, and one caused by the 9-11 terrorist tragedy. Auburn had a week off after 9-11, when they would have played LSU. With an extra week, Auburn prepared for a trip to Syracuse. The bye was of no help. The Tigers looked pretty lost on both sides of the ball, and lost 14-31 to the Orangemen. The second bye week was after the worst Auburn loss to Arkansas in history. The Tigers had turned a tight game in Fayetteville into a 17-42 blowout loss with 4th quarter turnovers. After the bye, Auburn rode freshman Carnell Williams for 41 carries, and upset Georgia in Athens 24-17. Verdict: Bye weeks were a 50/50 split in 2001.

The 12 game regular season made its first appearance in 2002. Auburn had a bye week after a three overtime squeaker against Syracuse, 37-34. After the bye, Auburn was steamrolled by Arkansas 17-38. The Razorbacks racked up 426 yards rushing in that one. Verdict: After the bye, Auburn fell apart on both sides of the ball.

Auburn got a bye week in 2003 after just two weeks. It was a disastrous two week span, with a 0-23 loss to USC, and a 3-17 loss to Georgia Tech. Tommy Tuberville called in consultants to fix his offense during the off week. Auburn came off the bye with a 45-7 blowout of Vandy, and won 5 straight games. Verdict: The bye week could not have come at a better time.

Auburn went 9 weeks till the bye in 2004. The 9th game was a 35-14 win over Ole Miss, and the Tigers looked tired. After the bye, Auburn hosted two-time defending east champion Georgia. Auburn was the tougher team, gutting out a 24-6 win that vaulted Auburn close to second place in the BCS title race. Verdict: The off week helped the Tigers.

In 2005, the bye week occurred in week six. Auburn had lost the opener to Georgia Tech, but had reeled off 4 straight wins, the last being a 48-7 beatdown of Steve Spurrier's Gamecocks. After the bye, Auburn traveled to Fayetteville. The Tigers messed around for a half, then pummelled the Razorbacks 34-17. Verdict: Uncertain. Auburn did look fresher in the 2nd half, but the off time seemed to have stalled the offense in the first half.

The 12 game regular season became a permanent fixture in 2006. In 2006 and 2007, Auburn played straight through to the Iron Bowl with no break.

Auburn's bye week in 2008 preceded the Iron Bowl. The Tigers were coming off a frustrating 13-17 loss to an eventual 10 win Georgia team. The Tigers were 5-6, and needed a win over Bama to go bowling. The bye week may have helped Auburn keep it close for a half, trailing only 0-10. Tigers collapsed in the 2nd half, suffering a 0-36 beating. It was the worst loss to Bama since 1962. Verdict: The bye week had no benefit.

The 2009 season again saw the bye week right before the Iron Bowl, after playing 11 straight weeks. Auburn lost in Athens 24-31, when Mario Fannin could not hold onto a pass at the goal line. After the bye week, Auburn came out and hit top-ranked Bama in the mouth, going up 14-0 and playing toe-to-toe down to the wire, before falling 21-26. Verdict: Auburn improved drastically during the break.

In 2010 the break was again right before the Iron Bowl. The Tigers had run to a surprising 11-0 mark with a 49-31 win over Georgia. The Tigers had already clinched the SEC Western Division title heading into the bye. In the first half of the Iron Bowl, it was like the Tigers had forgotten everything they knew, falling down the toilet to a 0-24 deficit. The Champs rallied, though, and forged the greatest comeback in Auburn history. Verdict: Bye week seemed to have taken the edge off the Tiger machine.

One thing that stands out in those recaps is that having a bye week before going to Athens has been great for the Tigers in the past 20 years. That's what we've got this year, and Georgia is playing well since dropping their first two games. A Georgia win against Auburn will all but clinch the SEC East for them this year, so they should be motivated for this game.

Tallying up the results of my opinion/verdicts above: we've had 19 bye weeks prior to this one. In those, we had 11 beneficial results, 2 uncertain results and 6 times that the team seemed to have regressed during the break. Result of my completely unscientific survey? Bye weeks help Auburn about two thirds of the time. Let's hope we're on the right side of that equation this year! Here's your last stat of the day: In the oldest football rivalry in the south, Auburn has never lost to Georgia in Athens following a bye week. Ever. War Eagle!