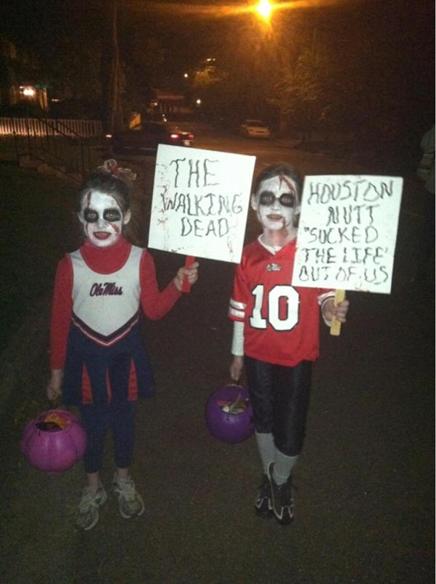 Earlier in the week...

Basketball season is close at hand. The men enjoyed their first exhibition against Paine College, Tuesday evening, and started out with a fury. Something Coach Barbee has been working on all preseason is finishing strong. The Tigers did not do that, and hopefully, this game can be a wake up call to our boys of the hardwoods, to fight to the finish. Maybe Coach Chizik needs to have a talk with them.

The upcoming ESPN look at the Iron Bowl entitled "Roll Tide/War Eagle" debuted to a select audience this past Tuesday. It aired in Birmingham at the Alabama Theater to rave reviews. Some of the topics the film covered were the Toomer's Corner oak tree poisonings by the mad man from Dadeville, and the inspirational musical choices of last year's Iron Bowl by the administration at Bryant-Denny stadium. No hard feelings.

Ridiculous by nature... Or as I like to call it, "What the heck are you guys thinking?".

The big buzz around this time of year is the Bowl projection articles going up all around the sports universe. There are many who have resorted to polls of sports writers projecting where each team will end up at the end of the season.

Who gives a rats hind end? Right now the biggest question is centered on how are we going to finish the regular season, and defeat our cross state rivals.

Don't give me any excuses along the lines of travel plans and such. There will be at least a month for all of that. It's just another thing that takes away from the enjoyment this time of year brings to this old wind bag. The only possible reason for projections this early, is for some poor saps ego, so he might be able to say "I told you so". Besides, I think we win two of the next three, minimum, and go to the Cotton Bowl.

I would like to start a new trend here on the Friday Ramblings post, to include what I determine to be the best comment of the past week from one of our readers. I'll make the rules up as I go, and offer my take on whatever comment was made. Hey, it's my post, I can do what I want! This weeks choice is...

sick of it - by TobyWDE

I’m sick of people bothering teams because of their mascot. Do you think the civil war didn’t happen? Do you think a sting ray didn’t kill Steve Irwin? Should we boycott the Devil Rays? What about the Seminoles, Chiefs, or Indians? Aren’t they just racist? GIVE IT A REST. War Eagle.

I understand the frustration.

There was no intent to harm, degrade, or make light of a terrible part of American history. Schools, teams, and indeed franchises have the right to choose their themes and ultimately their mascots, or logo.

Take the FSU warrior riding a horse and throwing down his spear. I look at that as honoring a tradition and a way of life that has disappeared from our landscape. America has the option to of whether to endorse, or otherwise participate in such an endeavor, and can even boycott such things. To say that Ol Miss, FSU, the Washiington Redskins, or Tampa Bay Rays(?), are in anyway demeaning to a certain part of the public is ridiculous. The lawyers, and judges that allow this sort of tripe into our court system are to blame, along with the media.

While I understand some of you will say, that this is a sports blog, the subject matter is a sports issue. There is nothing inhumane, or dishonorable about a sports team name. GET OVER IT!

Otherwise known as ESPN. (sigh) Okay, whatever! I get that it's number one vs number two. The top of the heap doesn't happen every weekend, and it won't happen again. Until the next time that it does.

Bama and LSU are two very good teams, and this should decide the West division champs. Stranger things have happened, but the winner here is clearly in the driver's seat, and the loser is out of gas, and broke. Alabama has the edge if they beat LSU and lose to Auburn, they still win all tie breakers. The only way LSU can stay in control, is win. Win this weekend in T'Town, and when they play Arkansas.

Miss State has relatively no chance to defeat LSU, if LSU wins this weekend, so that hasn't factored into this discussion.

My best guess, and it is a guess, is that LSU is a little better than Bama on the defensive front, and that decides a close ball game.

Enjoy the off week,