Shaking off a Rocky Season.

Share All sharing options for: Shaking off a Rocky Season. 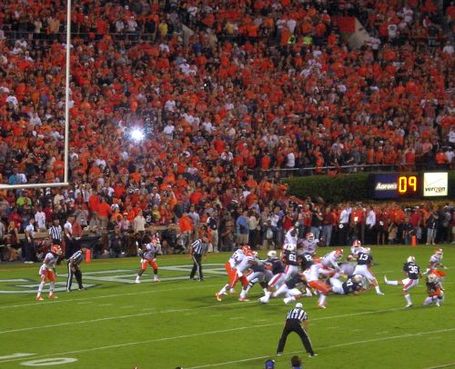 Tigers are now looking to kick the extra point, and beyond.

War Eagle, everybody! First off, let me apologize for the lack of my usual paragraph indents. Editing problems, ick! A rough regular season is over, and it's time for the Tiger Nation to move forward. To be sure, there's great consternation over a team that was repeatedly blown out by top-25 teams. Auburn lost to Clemson, Arkansas, LSU, Georgia and Alabama by a combined 69 to 208 points, or an average of 13.8 to 41.6. Even looking back to the worst season in Auburn history, 1950, you don't see that sort of margin. Earl Brown's 1950 squad lost every game, by an average score of 3.1 to 25.5. Of course it could be argued that football was very different 61 years ago, and it's a good point.

One of the oldest adages in football is, "you win in the trenches." I think most of Auburn's troubles will be fixed with stronger lines next season. Unlike Earl Brown's team, or 13 of Shug Jordan's teams, or all of Doug Barfield's teams, or even 3 Pat Dye teams, this Auburn team will go to a bowl game. For all of the consternation, Auburn won 7 games, and did not lose to a team it was favored over. Highlights of the season were a double digit win over Florida, and a win on the road against a 10-win South Carolina team. The Florida win was particularly delicious. Auburn has just four wins by 11 points or more against Florida in the past 40 years. And Auburn beat South Carolina before the Gamecocks lost their quarterback and star tailback.

The month of December will give weary, battered and bruised Tigers a chance to heal, and I think Auburn will surprise some folks in a bowl game. Auburn fielded a pretty athletic team back in September, one that made tons of mistakes, but that was all over the field. I think you'll see that again after Christmas, only these guys are a lot more experienced now. A bowl game is a great thing for this young team, because it means more weeks of reps. Win or lose, the extra work is invaluable. Of course, you'd like a big bowl win, to set the tone for next season.

So, what does the future hold for the Auburn Tigers? We'll leave the coaching speculation for another time. Other than the murmurings of disgruntled Auburn family members, we've seen no real indication that there will be any changes made. Turnover among assistant coaches happens. Guys get let go. They move to different opportunities. It's rare anywhere for the exact same staff to be in place for three straight years. If there are any changes, I have confidence that the team of coach Chizik and Jay Jacobs will make great replacement hires.

We can get a bit of a picture of Auburn's next team by looking at who's likely to return. This team has only 5 senior starters, and only maybe 8 guys total that play significant minutes that won't be back next season. There's always attrition, guys that are hurt, guys that have grade problems, or guys that transfer. That's every year, so expect maybe another half dozen or so. The rest of the team returns, and they'll likely be joined by another strong recruiting class. We'll look at the team's prospects, after the jump.

Defensive Line: Auburn was supposed to have a lot of young talent this year, with little experience. A lot of those young guys got banged up as the season went on, and the result was a defense that got pushed around down by the good teams in October and December. Numbers were particularly critical at defensive end, where the Tigers finished the season with only Nosa Eguae, Corey Lemonier and Craig Sanders available. Every player on Auburn's defensive line should return. Auburn has as many as six defensive tackles that should eventually be SEC stars. Next year we'll really be looking for Jeffery Whitaker and Kenneth Carter to step up. They'll be veteran upperclassmen, and should be strong. At end, Auburn will welcome back Dee Ford, LaDarius Owens and Justin Delaine. Ford was probably Auburn's best rush end, before he was hurt. Owens and Delaine showed flashes, also. Next year we should be bigger, stronger and deeper on the line.

Linebacker:This is probably the biggest question mark going forward. The Tigers lose Eltoro Freeman and Ashton Richardson. The trio of Darren Bates, Jake Holland and Jonathan Evans have played a lot of football, but the crew behind them has played very little. The most experienced backups going into spring will likely be Jawara White and Justin Garrett. There will be a great chance for some talented youngsters like Kris Frost to play meaningful minutes next season.

Secondary: Auburn loses Neiko Thorpe and Drew Cole in the secondary. I'd also rate T'Sharvan Bell's chances as iffy. Those late season knee injuries often aren't fully healed by the next fall camp. Still, Auburn will return depth and experience in the backfield. Corners Chris Davis, Jonathan Mincy, Jermaine Whitehead, Ryan White and Robinson Therezie have all played extended minutes at corner. Also Jonathan Rose should be in the mix. At safety, starter Demetruce McNeal will be the veteran, and you'll see Ryan Smith, Erique Florence, Ikeem Means and Trent Fisher battling for the other starting job. The secondary may be the strength of the defense, next year.

Kicking Game: One has to feel good about Steven Clark and Cody Parkey returning next season. Both of those guys were sensational in 2011, and are probably the main reason that Auburn won enough games to go bowling. The return game is also in good hands, with Onterio McCalebb, Quan Bray, Trovon Reed, Tre Mason and several others all returning. One key position that will have to be replaced is deep snapper Josh Harris, who'll graduate after this year. You rarely hear his name called, but when did you see the last bad Auburn snap on a punt or extra point? Candidates to be the next snapper include sophomore Jake Lembke and freshman Forrest Hill.

Offensive line: With apologies to the quarterbacks, this is the area with the most question marks going forward. Without a good offensive line, we won't have a good quarterback next season. Auburn loses both starting tackles, plus veteran guard Jared Cooper to graduation. Chade Slade played early in the season at right tackle for a few quarters, and John Sullen has a few minutes in previous seasons at tackle. Auburn will have to get a pair of tackles ready this spring, and that's a tall order in the SEC. The real question will be whether veteran guards are moved out, or will the coaches start redshirt freshmen with no experience? We'll be watching this line on A-Day like a hawk. If we see Auburn's plethora of defensive ends running amok in the backfield, it could be another tough year for the offense. It's Auburn's most critical area, by far. Auburn will have at least a dozen linemen to work with next spring, many of them 4 and 5 star recruits like Greg Robinson and Christian Westerman.

Receivers: Auburn loses Quindarius Carr and Jay Wisner to graduation. Emory Blake and all the rest return. One thing Auburn has really lacked this season has been a tight end. With Phillip Lutzenkirchen relegated to mostly H-Back duty, Auburn has not had a dual threat guy that can both block and be a threat in the passing game. The blocking part has been pretty spotty, to tell the truth. Auburn needs immediate help here. We'll be looking for Brandon Fulse to step up and be a major part of the offense next season. Auburn also needs some receivers to step forward. Beyond Blake and Trovon Reed, catches were few this past season. There is some talent waiting in the wings, and we'll look for great things out of Sammie Coates and Jaylon Denson.

Running Backs: Message board rumors aside, the only losses from the Auburn backfield will be Davis Hooper and Chris Humphries. Michael Dyer and Onterio McCalebb with Tre Mason should make for a dynamic group of runners. Phillip Lutzenkirchen and Ladarius Phillips return at H-back. This should make for a strong group, but Auburn does need more depth at both spots.

Quarterback: Auburn returns everybody from this group, but the latest unsubstantiated chatter is that Barrett Trotter, who already has a degree in hand, won't return. That leaves a two-horse race between incumbent Clint Moseley and Khiel Frazier. There is talk that incoming freshman Zeke Pike will enroll in time for spring drills, and will compete for the starting job immediately. If Pike wins, you'd have to be apprehensive. The SEC's been awfully rude to freshmen quarterbacks in recent years. I can remember Georgia with Matthew Stafford losing to both Kentucky and Vanderbilt in the same season. Then there's Georgia's 6-7 season with Aaron Murray last year. This is another critical area to watch over the course of the next few months.

And there's your hazy picture of what to expect next off season. The defense looks to rebound, but there are a lot of offensive questions going forward. We'll be hanging on every word out of Auburn over the next nine months, trying to get a handle on what's to come.