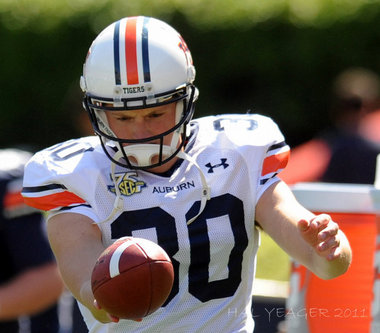 Auburn's All-SEC punter Steven Clark has been named to the Pro Football Weekly's All-American Team. Announcement of the players making the team was made earlier today

The Auburn sophomore averaged 40.5 yards on 69 punts this season. He was No.1 in the South Eastern Conference and second in the nation in placing 32 punts inside the 20 yard line.

Just 10 of his punts were returned this season and only for 62 yards. Of those 10 returns, five went for zero or negative yardage. He forced 34 fair catches and had two touchbacks.

Twice Clark was named the SEC Special Teams Player of the Week. In addition, he was named last week to the All-SEC First Team and finished as a finalist for the Ray Guy Award. Congratulations Steven and War Eagle!