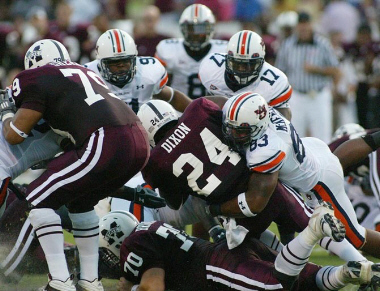 Auburn's coaches are concentrating on recruiting this week, in between practices in preparation for the Chick-fil-A Bowl game against the University of Virginia Cavaliers. Rest assured this coaching staff knows where the "most needed" positions on this team are, and they are working diligently to shore up the weaker areas.

We were told in the spring, and again in the fall, that this year would be a test of our patience. Boy, was that ever the truth. I will try and take an in depth look at each position, and give you as much information as possible on Auburn's efforts in recruiting them.

At defensive back Auburn has plenty of young faces. Most of those have only one season under their belt, and now will face a new defensive coordinator with new terminology and schemes. The Tigers have 16 names on the roster listed as DB, of those only two are Seniors- Neiko Thorpe, Drew Cole, and two Juniors- T'Sharvan Bell, Ikeem Means. 5 true Freshmen- Erique Florence, Robinson Therezie, Jonathan Rose, Jermaine Whitehead, and Anthony Swain. There are 3 Redshirt Freshmen- Jonathan Mincy, Trent Fisher, and Jordan Spriggs. Leaving us with four Sophomores- Chris Davis, Demetruce McNeal, Ryan White,and Ryan Smith.

Auburn currently has three verbal commitments at DB and may look to add one other, but only if they are a very good prospect. I don't see Auburn going after many other prospects in this area. It is the one place on defense that has the numbers and the talent needed, already on the roster.

At times this past season on the defensive line, Auburn showed weakness and inexperience. Experience they gained, and weakness can be overcome. This off season the workouts should yield tremendous results and have the Tiger defensive front ready to compete with the best of the SEC going forward.

Defensive line coach Mike Pelton has 17 bodies to work with at this position. Starting with the fact that there are ZERO Seniors and only 3 Juniors- Jamar Travis, Joel Bonomolo, and Dee Ford all of whom saw very limited playing time, it's no wonder this was the biggest area of concern for the Tigers in 2011. It continues to be an area of extreme importance in recruiting this year.

With only two linemen on the defensive side of the ball so far as verbal commitments, Auburn may be looking for a big time prospect to finish this class. There are only a few defensive ends that aren't already verbally committed, with higher ratings according to rivals.com, but many more tackles are in this class, and several have Auburn as a high interest. This area is a concern for these coaches.

At linebacker this season we were witness to some spotty play throughout. Very few times were AU linebackers involved in big time plays. We were spoiled by the play of Josh Bynes in his Senior campaign, and a big time play maker never really materialized this year. This is not to take away from some good play at times, more a reflection of the season as a whole defensively.Time and again, we saw poor angles taken to ball carriers, and apathetic pass coverage from this unit.

It's no secret that former DC Ted Roof coached this unit, and now that he is gone, an upgrade is needed here more than anywhere else on the team. Graduation will take arguably the most energetic player on the defense in Eltoro Freeman, and seldom used Ashton Richardson leaving only ten bodies to fill three spots plus the rotation.

This position is by far and away the primary concern for Auburn in this years recruiting class defensively. I look for Auburn to try and add at least 4 linebackers, of which two are already verbally committed. There are still two Inside Linebackers (ILB) and two Outside Linebackers (OLB) that are highly rated and as of yet uncommitted.

We all want and expect Auburn's defenses to be of championship caliber. Our past has been built on quality defenses that stop the run, and seldom gets beat by the deep ball. We could do neither on a consistent basis this year. Blaming the style of offense as the cause of this, is an opinion based on complete ignorance of the mindset of most defensive players. It is and will always be the responsibility of the defense to stop the opposing offense at all costs, every single time they are on the field.

Statistically, Auburn was horrendous in stopping third down conversions in 2011, an area that must be addressed by whomever is tabbed to replace Ted Roof. The amount of time that Auburn's defense had to spend on the field was directly linked to that specific problem. Had this unit been able to get able to get off the field at a 64% average***, the outcome of at least two other games could have been different.

Regardless of how many times, regardless of how much time it takes, the defense must stop the opponent and force either a turnover, or a punt. I would argue that every player, on every top defense in the country will tell you the same thing. "My job is to stop their offense". Period.

***that is the average opposing defenses had against us-editor