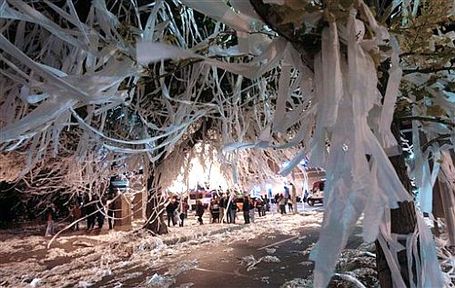 War Eagle, everybody, and Merry Christmas! Here's hoping everyone is gearing up for a great holiday. This is perhaps the one time of year when we can put aside worry, get emotional without regret, be children again, and just plain have fun! In these times of Auburn turmoil, it's easy to forget that. Personally, I'm enjoying a fun week with both of my kids home, and lots of friends in town.

For those angsting about Auburn's vacant coordinator positions, I would counsel patience. Gene Chizik doesn't seem to be in any hurry to rush towards hasty hires. When asked yesterday if he was going to wait till the end of bowl season, Chizik replied, "that is certainly a good possibility." The Auburn head coach added, "People will portray it the way they want to, but the reality of it is nothing has changed. We are on the exact same path we were a month ago, two months ago. People are going to spin it how they want to spin it, but I can assure everybody out there that there is absolutely, 100 percent one direction we are going and it's the same direction it's been going since we got here three years ago. Nothing has changed and the future is very bright."

One positive bit of news coming out of bowl drills is that depth in the front seven on defense should take a big step up from recent weeks. Tackle Kenneth Carter has recovered from his multiple nicks and bruises late in the season, and he has reportedly stepped up his game a great deal, and taken the starting job back from freshman Gabe Wright. Several ends have returned, and are having good practices. Devonte Sigler is working a strong side end, and gives Auburn a big body on the edge against that Virginia rushing attack. LaDarius Owens is healthy again at rush end. Along with starters Nosa Eguae and Corey Lemonier, with Craig Sanders, that gives Auburn 5 defensive ends that can play at a high level. Auburn could barely field three guys the last month of the season, and it showed in Athens, and against Alabama.

Likewise, the linebacker corps should be much healthier for the bowl game. I remember thinking in the middle of the season that linebacker Jake Holland looked too slow to play in the SEC. Turns out he was playing with TWO high-ankle sprains, a torn bicep, and a broken wrist. Wow. I think few guys would make it on the field with those ailments! Holland is healthier now than he has been in months. Also rejoining the Tiger depth chart is Jawara White. The starters in Atlanta should not have to play every snap, as was the case in the second half of the season against SEC foes.

Coach Chizik has indicated that we should expect to continue to see Onterio McCalebb on kick returns, after he housed one against the Crimson Tide. McCalebb is considering the NFL draft this spring, and his most realistic shot at playing time in the big league is as as returner. Personally, I'd rather he not see many returns in the Chick Filet Bowl. That would mean that we're stopping Virginia, and they aren't scoring. And it would mean a better chance of one more year of McCalebb on the plains! He's certainly been fun to watch the past three years!

Like the defense, the offense should benefit from healed players such as receiver Emory Blake. Auburn needs a good offensive showing to have a chance to win against Virginia. After this season's anemic offensive finish, I think it's left a bad taste in everyone's mouth. I know Gus Malzhan would like nothing better than a big showing against the Cavs in his Auburn finale. Talk on the street is that opponents have Gus' offense "figured out." I know he'd love to prove the naysayers wrong once again! My understanding is that Clint Moseley will start the game at quarterback, but we'll see extended time with Khiel Frazier running the whole offense. Frazier on play-action has the potential to really hurt defenses, if he can find the open receivers.

It may not help much in the bowl game, but there have been a number of scout team players singled out for praise this camp. It sounds like offensive linemen Greg Robinson and Christian Westerman will be ready to step in and make some immediate noise on the left side of the offensive line next spring. There will be some amazing battles ahead for whomever wins that left tackle spot, taking on Lemonier, Ford, and Owens.

Many folks are lamenting the possible loss of McCalebb and Michael Dyer next season, but the cupboard is not bare at running back. Tre Mason is a dual threat with both power and speed. Sitting out this season were freshmen Mike Blakeley and Corey Grant. Grant was recently named the best offensive scout team player this year, and coaches have really been impressed with his work ethic. Grant was a 6-A 100 meter sprint champion in high school, and can turn on the jets.

A shaky receiver corps this season should get a boost from Sammie Coates and Jaylon Denson. These guys both can be big play threats. Denson's a big target, and Coates was having a monster fall camp before being injured. A year of Yoxercise should work wonders with both. I also think offseason workouts will really help Brandon Fulse and Ladarius Phillips at the H-Back/Tight end slots.

Happy Holidays to all of our friends here at Track Em Tigers! It's going to be a busy 4-day weekend at the Reign household, but I hope to carve out the time to watch a few Auburn DVD's from last season's miracle run. I figure that the Iron Bowl, SEC Title game and BCS Title game should run just long enough to get a turkey smoked, with a few breaks to load more charcoal or hickory. War Eagle, folks! It's that bowl game a night time of year, and I'm loving it!