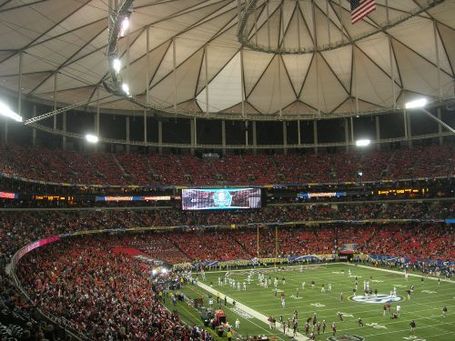 How will the Tigers fare in their return to the Georgia Dome?

War Eagle, everybody! It's been a fantastic bowl week, and we've been loving it! Some complain that there are too many bowl games, but for the fan of the college game, it's like the 12 days of Christmas! Typical day this week includes an early game for happy hour/supper, and a nightcap to fall asleep to. It's this time of year that I'm getting the best look at teams around the country, and seeing what's going on outside of the SEC.

The Armed Forces Bowl yesterday was likely as entertaining as anyone you'll see this winter. The teams each scored six touchdowns. Air Force scored very late on a 4th and 2 hail Mary, to pull within one point. Air Force coach Troy Calhoun then made the gutty decision to go for two points, to try and win the game in regulation. Alas, with the game on the line, he put his kicker and holder out there to run a fake extra point, instead of the offensive stars who had put up 407 yards in the game. A fumble ensued, and the game was over. Me, I say bravo for the 2-point try! But, next time, ride the horse that got ya there, coach!

How will the SEC do in the bowls this season? My take is that the bulk of the league's bowl eligible teams have been doing a gradual slide since winning 7 of 9 bowl games in 2007. Last year's SEC record was only 5-5, punctuated by the East going 1-4. With the SEC's top two teams playing each other, and one assured of a loss, it's quite possible that the SEC could have a losing bowl record for the first time since 2002. Let's take a look at what's to come for the SEC.

Mississippi State gets things started Friday evening in the Music City Bowl against Wake Forest. After watching Vandy absolutely drill this team on the road in the last game of the regular season, I think the Bullies will have little trouble. MSU wins.

Saturday afternoon Vandy plays in the Liberty Bowl against Cincinnati. It's on national network ABC-TV, and the Bearcats are explosive when healthy. And of course they've had six weeks to heal. This is a tough matchup for the Commodores. You'd think Memphis would be like a home game for Vandy, except that often their own home stadium is dominated by visitors. Vandy likely loses this one.

New Year's Eve features Auburn vs. Virginia in the Georgia Dome in the Chick-Filet game. I've avoided mentioning it till now, but this is a nightmare matchup in the trenches for the Tigers. Auburn will likely enjoy a pretty good speed advantage with the offensive skill players and the defensive secondary. But in the trenches, Auburn's been poor down the stretch this season, and Virginia has seasoned veterans on both sides of the line. The Tigers have struggled to do much of anything in the passing game all season, and Virginia will send 8 guys to stop the run all game long. Without leading Tiger rusher Michael Dyer, the task gets tougher. On defense, Auburn's tended to get blown off the ball by good rushing teams, and Virginia's offensive line has only allowed 15 sacks all season. Unless the Tigers get some inspired quarterback play in this one, it's likely to be ugly. I think Auburn loses this one, but hopefully we'll do better than we did against LSU/UGA/Bama.

Florida, Georgia and South Carolina ring in the New Year (well, a day late, on Jan 2.) with competing noon bowl games. In the Gator, it's Florida vs. Ohio State. This is a matchup of two shaky, barely eligible teams, and how it rates New Year's day status is beyond me. Both offenses are wildly inconsistent, but each team is decent at stopping the run. I give a bit of an edge to Florida, because speed backs Rainey and Demps should be healthy for this one. However, the defense will have to deal with dangerous Buckeye quarterback Braxton Miller, and Florida has had difficulty with scramblers this season. I pick Florida by a nose in this one, in front of a lot of orange and blue clad fans in Jacksonville.

In the Outback Bowl, Michigan State returns to the state of Florida hoping to redeem themselves against Georgia. This time a year ago, the Spartans took a 49-3 thumping from Alabama. They were overwhelmed by superior SEC size and speed. Georgia plays similar schemes, and has similar size to Bama. Georgia finished 3rd in the nation in total defense, and should be able to limit Kirk Cousins and BJ Cunningham's heroics. The Spartan defense has had problems against teams that can both run and throw it, and UGA is as balanced as they come with Crowell running wild, and Aaron Murray, who's likely the best quarterback in the SEC. Georgia should win.

The Capital One Bowl features South Carolina vs. Nebraska. Some would say that the Gamecocks won ten games with smoke and mirrors after losing their quarterback and all-star tailback during the season. How USC really won was playing stifling defense. The Gamecocks will be trying to clamp down on a two-pronged Husker rushing attack featuring versatile QB Taylor Martinez and battering ram Rex Burkhead. USC's Connor Shaw has developed into a dual threat himself, and has some pretty good Gamecock receivers to throw to. But folks, betting on a Steve Spurrier team to win a bowl game is dicey, at best. The visored one was only 6-5 in bowl games at Florida. At South Carolina, he's been downright awful in the post season, going only 1-4. Nebraska wins this one.

Friday night, January 6th features the Cotton Bowl. Speaking of teams with awful bowl records, Arkansas plays Kansas State. The Razorbacks have posted a 3-8 bowl record in 20 years of SEC play. Arkansas played well enough to make a BCS bowl this season, but was left out in favor of Alabama and LSU. Kansas State runs the ball, and finds ways to hang around and win in the end. They don't look great on defense, and don't put up pinball passing numbers like the Razorbacks. But they've found a way to win 10 games, and a lot of that style is embodied in quarterback Collin Klein, who rushed for 1099 yards in 2011. Arkansas flies around well on defense, but both Razorback losses this season featured tackling problems. Most high-octane passing attacks suffer from the layoff from regular season to bowl-time. I expect that Arkansas will have similar problems. Given their history, this is a game that the Razorbacks should win, but probably will find a way to lose.

The big enchilada is on Monday night, January 9th. Alabama and LSU do battle for the BCS title. Having watched the entire regular season matchup between these two, I think Alabama's the stronger team. I think they've battled through some injury problems, and continued to get better as the year went on, particularly on offense. LSU has a huge special teams advantage. Also, if the game's on the line, I think you're a lot likelier to get a brainy-crazy play call from Les Miles to win it. Nick Saban's going to run a draw on 3rd and 8. I think the key for Alabama is to hit a few play action passes to secondary receivers early, make LSU play back a bit, and control the clock. If Bama can avoid handing LSU turnovers and good field position, I think they are about a touchdown better in this game. Given how good LSU's defense is at creating havoc, that's a big "if." I'm picking Bama in a nail-biter.

If the bowl games turn out the way I've guessed, the SEC will finish 4-5. And none of these matchups appear to be a slam-dunk SEC win. (With the possible exception of MSU/Wake.) The only assured thing is that an SEC squad will win the BCS title game. The SEC may surprise and make a great run. It's also possible that both Bulldogs and the Razorbacks hark up hairballs and the SEC has their worst bowl outing in quite some time. In any event, it should be quite the football extravaganza the next 11 days!

Addendum: We'll have our usual open thread and play-by-play up for the Auburn vs. Virginia game Saturday evening! Feel free to drop in, and cheer on the Tigers! I'm hoping to see these guys rise up and win a big matchup in the trenches. We saw flashes of that this season against South Carolina and Florida, but it's time to make a move up. War Eagle! Beat the Cavs!