Every now and then during the holidays, through all the lights and commercialism, we come across the perfect Christmas story that reminds us why the season is so special. This one involves a little boy's belief in the improbable and Auburn's Cam Newton.

If this one doesn't warm your heart, then you are likely dead. A special thanks to Auburn graduate Chris Humphries for allowing us to reprint his story that originally appeared on his blog, The Road Less Traveled.

Over the last few days, his article has become a Facebook and Twitter sensation. I hope you enjoy it as much as I did...

Many people who do not live in the South or who did not grow up in the State of Alabama may not get the significance of the following story but so many of us who live, or have lived here, will understand completely. Auburn University and our football team is a way of life for many of us.

As a child, I grew up watching Auburn establish itself as a football powerhouse with such greats as Bo Jackson. I went on to graduate from Auburn Univerity in 1996 and I continue to bleed Orange and Blue.

A few weeks ago I was given the opportunity to get some tickets to see the Carolina Panthers play the Tampa Bay Buccaneers. The big problem was that it was on Christmas Eve and with so many things going on, I wasn't sure that I could pull it off. I knew my 10 year old, Parker, would love to see the Panthers play because his favorite football player, Cam Newton, is their starting quarterback.

We actually had a choice of where we wanted to sit so I told Parker he could decide where we would sit. We could sit in the club level on about the 40 yard line and see every play that Cam made. Or, we could sit in section 118 on the 4th row, in the corner of the endzone on the visiting side.

I told him he "might" get the chance to see Cam score a touchdown and get an opportunity to "maybe" get a football from Cam. In my mind I knew the chances of him getting said football were about a million to one.

Obviously, the optimistic mind of a 10 year old prevailed and he chose to sit in the endzone and get the "chance" to see Cam score and get a ball! Even before the game started, he told me several times that he felt like he was dreaming and that he couldn't believe we were actually going to see Cam play in an NFL game. He thanked me on several occasions for his Christmas present.

As the introductions started the excitement grew. I have been to hundreds of college football games but this game was only my second NFL game. The atmosphere is completely different but it is a different kind of excitement. It's hard to explain but if you have ever been to both NFL and college games, you know what I mean. On the first drive, Cam broke the NFL Rookie passing record held by Peytin Manning. The fun had begun!

As an Auburn fan, I watched last year as the media and other Universities tried to destroy Cam's reputation both on and off the field. He was accused of everything imaginable as a "cheater" at Auburn and he was labeled as a quarterback who would never succeed at the NFL level. Even this year, people such as Terry Bradshaw said that they would've taken every quarterback available in the draft over Cam, even Blaine Gabbert at Jacksonville.

So, to see Cam not only be successful, but to be a star in his own right has been satisfying to say the least. During this game, Cam showed off. He even ran for a 49 yard touchdown that reminded me of a similar run that he made against LSU last year. To see all of these things in one game was amazing for both Parker and me. Quite honestly, it was just like watching a game at Auburn last year. Pure domination by a superior athlete.

There was a huge downside to all of the fun on the field though. Each touchdown that the Panthers scored was in the opposite endzone. Ball after ball went to other kids and I knew in my mind that the odds were getting smaller and smaller for the Panthers to score in our endzone. At the end of the 3rd quarter the Panthers scored again giving them a total of 41 points.

I told Parker at that time there was really no chance we would see a Panther touchdown on our end. If you watch the NFL like I do, you know that 41 points is a ton of points for one game and many teams won't score again with that many on the board. Little did I know at the time, I was wrong.

The Panthers started the fourth quarter by immediately driving to our end of the field getting in the Red Zone quickly. As I had on the previous few occasions that they had done so, I told Parker to go down to the rail and get ready, "just in case". It was a bit chilly during the game so Parker had a hoodie on over his Auburn hat.

I told him each and every time to take the hoodie down and let Cam see the Auburn hat. I also told him to yell "War Eagle" as loud as he could because everyone else in the stadium would be yelling Cam's name if he scored.

The Panthers drove down to the 8 yard line and that is when the something amazing happened. The ball was snapped and everything seemed to happen in slow motion from that point forward. Cam completed a pass to Jeremy Shockey to the left side. Shockey then broke two tackles and made his way into the endzone, scoring the final touchdown for the Panthers for the day. Stockey threw the ball down which ended up just past the end zone.

I watched as Cam came in and celebrated the touchdown with Shockey. He then immediately turned to the side judge and I saw him mouth the words, "Where is the ball?" The referee pointed to the ball and Cam ran to it and picked it up.

I watched as Cam looked straight up at Parker, smiled, and ran straight to him. He then handed him the ball and Parker says he said "War Eagle" as he did so. The next few minutes were such a blur but I do remember Parker running straight to me and jumping in my arms screaming that he got the ball. 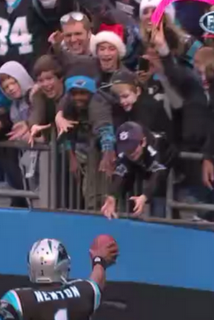 All of the kids in the section came running to Parker wanting to see the ball and get their pictures made with him. There were even adults that came up and wanted to touch the ball. We were all overwhelmed with excitement.

As things settled down I noticed that Parker was crying. I asked him if he had gotten hurt during the chaos and he said, "No Dad, I'm just so excited that I can't quit crying." About that time I took this picture (top right) and one thing comes to mind when I see it, Pure Joy!

I took a ton more pictures as did a bunch of other people in the section. There really aren't any words that can be written or said that would capture the moment for Parker or myself. I have tried to convey the story the best that I could in this blog but I know in my heart that it could never match what happened on Christmas Eve.

On the drive home I lost count of the number of times that Parker told me thank you and that it was the best Christmas present that he had ever gotten. I know he is grateful but I hope he understands the significance of what happened Saturday.

I took so many things away from the events on Saturday but here are a couple of things that come to mind:

- Cam Newton is the real deal. I'm not just talking about talent and ability. Yes, in my opinion, he will be one of the best ever and I believe he will win Super Bowls as an NFL Quarterback. Those things are not what I am talking about though. What I am talking about is his love for the game and his love for the kids who watch him play. At Auburn, he spent his free time tutoring elementary kids. I hear he is doing the same things in the Charlotte area. It's not all about Cam Newton and he has made that abundantly clear.

- Auburn is family. I have no doubt in my mind that Cam gave that ball to Parker because he saw that hat and possibly heard him yell "War Eagle". I have received so many messages from Auburn people who have seen the pictures saying how Ausome it was to see Cam give Parker the ball.

One of the men in Section 118 actually said to me, "Maybe I should've gotten my son an Auburn hat for the game." I wanted to tell him that being an Auburn fan is way more than wearing a hat. You can't buy family at a convenience store.

I know in my heart that Cam knows what his actions do to others. He understands that he is a role model whether he wants to be or not. What happened with Parker Saturday is a life long memory that he will never forget. I know it was for me too.

For any Auburn fan to get to be a part of that day would've been exciting. To be the Dad who got to experience it with his Son, well, I'm not sure if there will ever be another Auburn experience that great for me again. Thank you Cam for being such a great Auburn man. We are proud of you and I know one 10 year old that will be pulling for you and the Panthers for many years to come! War Eagle!