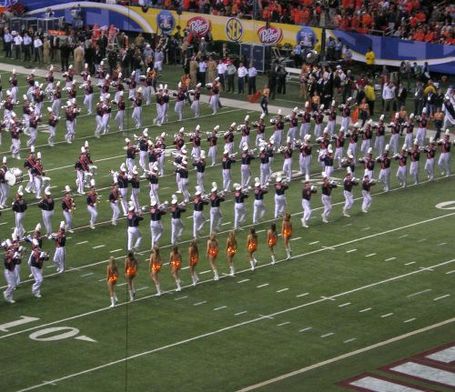 Tigers rocking in the Georgia Dome!

War Eagle, everybody! It's New Year's Eve! Tonight, the Auburn Tigers will take on the Virginia Cavaliers in the day's premier game, the Chick Filet Bowl in Atlanta! The game kicks off at 7:30 Eastern Time, and will be televised by ESPN.

It's only the third meeting in history between these two teams, and the winner will take the lead in the all-time series. Virginia's colors should look familiar to Auburn fans. Auburn wears burnt orange and navy blue due to the school's football founder, George Petrie. Petrie was a Virginia grad, and brought those traditional colors with him to the plains over a century ago. Tonight, the Auburn Tigers will be playing for their tenth bowl win in the past 20 years. Virginia will be trying for their 8th bowl win in in history.

It should be a beautiful day for Tiger and Cavalier fans to enjoy downtown Atlanta. Skies should be mostly clear, and it will be a temperate 60 degrees or a bit more. When the afternoon sun sets, a grinning half moon will be high in the sky over the Georgia Dome, with the planet Venus below, and Jupiter above. Folks might want to bring a jacket for the end of the game walk to New Year's Eve festivities. The temp will have fallen into the 40s.

Coach Mike London's Virginia team brings a potent ground based assault and stout defense into this contest. This offense may look familiar to those who used to follow the Washington Redskins back during the Joe Gibbs era in the 1980s. You'll see a lot of one-back power sets, with motion from the blockers and receivers. When the Cavs run play action, you'll see a lot of max-protect packages. They've only give up 15 sacks on the season, so it's incumbent upon Auburn to have good coverage downfield, and fill those gaps on run plays. When Auburn has the ball, they are going to have to do something to keep Virginia's 8 man fronts from keying on the running back and quarterback. It will be incumbent on outgoing coordinator Gus Malzhan to get the ball quickly to the flats, and run some counters off of that. It should be an interesting matchup on both sides.

We'll be here all afternoon, watching football and enjoying the holiday! As always, feel free to chime in and join the fun! Isn't bowl season grand? We'll have our usual play by play when the game kicks off! War Eagle, and let's beat Virginia!