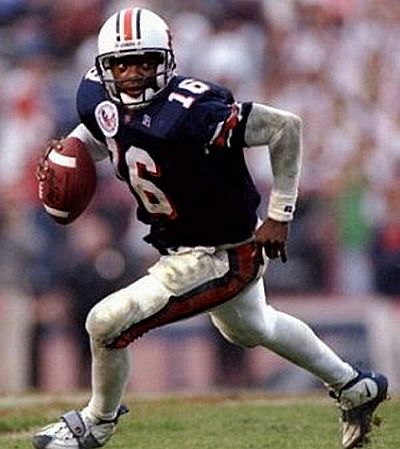 Last Tiger victory over Virginia was led by Dameyune Craig.

War Eagle, everybody! Amid all of the college football news and controversy this week, the most important thing for the Auburn Tigers is another bowl trip. The Tigers will travel to Atlanta for a New Year's Eve tilt with the Virginia Cavaliers, in the Chick Filet Bowl. It's Auburn's 11th bowl trip in 12 years. Even after a season with disappointments, it's important to remember that New Year's Eve rings out the best dozen years in Auburn football history.

To be sure, Auburn has been successful in the past. Shug Jordan took Auburn to 7 straight bowls from 1968 through 1974. Pat Dye's teams went to 9 straight bowls from 1982-1990. It's important to note that both of those stretches were surrounded by tough times. Shug's mid-1960s teams struggled, due in large part to an unprecedented 7 year bowl ban instituted in the mid 1950s by the NCAA. After the 1974 Gator Bowl, it was 8 long years before the Tigers got back to a bowl, the 1982 Tangerine Bowl. After Dye's 9 bowl run, we suffered through losing seasons and probation.

During this current run, Auburn has survived crises that derailed the program in the past. Coaching changes usually happen when results are sub-par. In the past, these have usually caused swoons including 3-8 seasons or worse. This time, Auburn survived the loss of Tommy Tuberville with only one 5-7 season. Also prevalent in Auburn's previous downfalls was the NCAA. The college cops kneecapped Shug in the 1950s, and helped seal Doug Barfield's doom in 1980. Pat Dye's great run was marred at the end by another NCAA investigation. In the past dozen years, the NCAA has investigated Auburn over sociology directed reading courses, and the Cam Newton payola allegations. What's different this time is that Auburn emerged from both investigations unscathed. That's progress, folks! The Athletic Department is committed to doing things the right way!

This Auburn football team is built on a foundation of sustained excellence. There are a pair of top 5 recruiting classes on campus, and and reportedly a third great class is on the way. I can tell you this: if a 7-5 season is considered a bad year, things are looking up! Let's get behind this team and cheer them to victory over the Cavs!

Auburn vs. Virginia nostalgia, after the jump!

The Tigers have a very abbreviated history with Virginia, having played them only twice all time. The first matchup was in Charlottesville for the 1997 season opener. The 1997 squad was a senior-laden team, with names like Ricky Neal, Jarrett Holmes, Victor Riley, Tyrone Goodson, Fred Beasley, and of course Dameyune Craig. However, there was preseason trouble on the offensive line. The Tigers were solid at tackle and center, but were going to have to start inexperienced sophomore T. J. Dunnigan and redshirt freshman T. J. Meers at guards. Then a week before the Virginia game, center Karl Lavine separated his shoulder. Redshirt freshman Cole Cubelic was deemed not to be ready, so Dunnigan, who had never snapped a football moved over to center. 330-pound behemoth Demarcus Curry moved into the vacated guard slot.

Snap exchanges and line calls were a big area of concern going into the first game of the season. On Auburn's first series, Dameyune Craig had to fall on a botched snap at the Auburn 5. Virginia blocked the subsequent punt, and was on the board with a 2-0 lead. Despite a short field after the free kick, the Auburn defense (led by Takeo Spikes) bowed up and kept Virginia out of scoring position the rest of the half. Auburn had bad field position for most of the first half, but early in the 2nd quarter Craig hit a pair of long passes to fullback Fred Beasley, then capped the drive himself with a 17-yard run. Auburn led 7-2 at the half.

Auburn got a bit of immediate breathing room to start the second half. Safety Ryan Taylor stepped in front of an Aaron Brooks pass, and returned the interception for a score on the first play of the second half. UVA was undeterred, though. On their next possession on 3rd and short, Brooks burned the Tigers with a 71 yard bomb to close the score to 14-9. Dameyune Craig answered. He scrambled out of trouble on 2nd and long, and rifled a precision aerial on the run to Karsten Bailey for a 57 yard score. Tigers were up 21-9. Early in the 4th, both teams had stalled. Lee Corso was the ESPN color man on the broadcast, and he opined that Craig was great rolling out with the ball, but was a poor pocket passer. The very next play, Craig stepped up in the pocket and dropped in a perfect long bomb to Karsten Bailey for a 77-yard score. Virginia managed a late drive and two point conversion, and the final score was Auburn 28, Virginia 17. The Tigers went on to win the SEC West in 1997, and fell by a single point to Peyton Manning and the UT Volunteers in the SEC title game.

Offensive line woes continued into 1998. This time, much of the trouble was squarely on the center position. Veteran Karl Lavine practiced in fall camp, but was not 100 percent due to lingering effects on the shoulder. Incumbent starter T. J. Dunnigan abruptly quit the team less than a week from the opener vs. Virginia. Sophomore Cole Cubelic was named starter, then he broke his foot just before the game. Redshirt freshman guard Mike Pucillo was moved over and named emergency starter at center. Then in the first offensive series of the Virginia game, Pucillo broke his foot. Karl Lavine had to come in, wounded wing and all. That wasn't the only problem with the line. Starting left guard T. J. Meers quit the team the same time Dunnigan did. The center position remained a problem all year. Lavine struggled, then was knocked out for good in the 4th game of the year. Taking Lavine's place was true freshman Ben Nowland. Nowland was injured, and out for the season a couple of games later. The Tigers turned to sophomore line journeyman Colin Sears, who had never snapped the ball in his life. Despite a non-existent running game and protection troubles, Auburn could not run the shotgun from there on out. A dismal 3-8 season ensued, Terry Bowden and Bill Oliver were out, and Tuberville was in.

Against Virginia in the season opener, new starting quarterback Ben Leard had a rough start to his sophomore season. The Tiger running game was no help, picking up only 18 yards on the night. The Tigers turned the ball over three times, managed only 179 total yards, and the Tigers never made it to the Virginia red zone. It was an abysmal offensive day, but the Auburn defense actually held their own against a veteran Cavalier offense. Auburn lost the opener at home, 19-0.

Taking a brief look at this year's Virginia team, it looks a lot like a typical George Welsh team from the 1990s. Cav coach Mike London has done a great job rejuvenating the Virginia program from the doldrums of the past decade. Like Auburn, Virginia is very young, playing a lot of freshmen. The Cavs like to play tough defense, and run the ball. Against better defenses, the Cavs have struggled offensively, finishing ninth in the ACC, behind even Miami and Wake Forest. Virginia won 4 of its last 5 games, but got blown out 38-0 by Virginia Tech in the season finale. They've also lost to North Carolina, Southern Mississippi, and N. C. State. If there's an Auburn advantage, it's that the Cavs have not faced anyone the caliber of LSU, Alabama, or even Arkansas or Georgia. Virginia also did not play Clemson. Their best win was a surprising 24-21 win over Georgia Tech at home.

Now that my little nostalgia burst is done, we can go back to our regularly scheduled arguing over the BCS, and the Big East land grab. Enjoy! War Eagle, and let's get fired up for the Peach Bowl!