TCU Turns Down Wisconsin in Rematch of Rose Bowl. Should Bowl Games Have Rematches the Next Season?

Share All sharing options for: TCU Turns Down Wisconsin in Rematch of Rose Bowl. Should Bowl Games Have Rematches the Next Season? 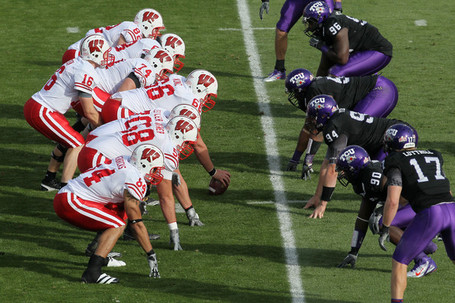 Certainly Auburn fans know the sting of annoyance when their program turns down the chance at a one-off, nationally-televised matchup, but an extremely interesting scenario involving TCU and Wisconsin unfolded last week that had an equally disappointing result for college football fans in general. As you know, TCU finished 2nd in the country behind Auburn and even garnered at least three minor national championship selector titles. But their surprising win over Wisconsin, which I admit I never saw coming nor could hardly believe, still only went so far to give the Frogs the respect they felt they earned.

Surprisingly, the skies opened up for a brief moment last week as Fresno, who had been slated to open the season at the Badger's Camp Randall stadium, showed a reluctance to play the return contest after hosting the Badgers to begin last season. Immediately, a third party tried to put together a rematch game between the Badgers and Horned Frogs from last year's Rose Bowl in a one-shot deal. TCU turned the offer down, mainly for the reason of the lack of a return game, but negotiations never got as far as the TCU AD speaking with his counterpart at Wisconsin.

Badger coach Brett Bielima, sounding every bit the homer, knowing the tremendous disadvantage TCU would be placed in, said "I would definitely love the challenge to play them again, and really, I thought it would be a great sell with our folks. Unfortunately, TCU wasn't as excited about the matchup." Really, Bielima? Then why not go to their house or offer a reasonal return date? You're the one who lost last time. If you want the rematch, make the effort.

And speaking of effort, we have no real idea of how hard anyone worked to make this game really happen. First off, was there no neutral site available, maybe like in Kansas City? We know that Cowboys Stadium is booked, hosting LSU and Oregon on September 3rd. (I wonder if anyone thought about swapping Auburn in there instead of the Purple Tigers?) The Chick Fil A Kickoff game is filled with Georgia and Boise State on the same day, and besides, Atlanta would be too far for both the Badgers and Frogs teams to travel. That would leave the return game as the only scenario to sweeten the pot for TCU.

Truly, if Wisconsin and Bielima wanted the game and there was a snowball's chance of having it, opening up the scheduler for a quick return to Ft. Worth in 1-2 years would have been the way to do it. But since the reports don't really mention any of that, we can assume that the Badgers just wanted a shot at redemption and wanted the deck stacked in their favor. You're the traditional power from the big conference and have the power to make things happen. For that reason (and considering the talk coming from the side of Brett Bielima's mouth, I blame Wisconsin for the failure to launch this game, even if it was presented as a long-shot. If it never had a chance, then it should have never been leaked to the media. News of failed negotiations for possible games like this routinely never see the light of day.

But where does that leave TCU? Granted, they had a great program that won much respect last season, if nothing else, but they still have their detractors. Even by joining the Big East this year, their strength of schedule is still largely suspect and it should be readily apparent that they will never jump established teams in the polls by feasting on the remnants of a Mountain West schedule for the meat of their season. What if they went to Wisconsin and beat them again? Would that give them the boost that another undefeated team in 2011 might vault to the top of the polls? Yea, I know, the Badgers have everything to gain in this shot at redemption and TCU has everything to lose. But is this not what they mean by the play 'em anytime, anywhere motto when it comes to teams establishing themselves in CFB? Nobody ever said adherence to that philosophy was easy.

Granted, why on earth did anyone want to rehash this game, anyway? It's over with, let it be. To my knowledge, there's never been a rematch of bowl participants in a contest the following season by 11th hour schedule tweaking. Let's not even begin to think about introducing that idea into our sport that close bowl games can be re-fought the next year by mere scheduling slight-of-hand. Let sleeping dogs lie, especially if the stakes are so one-sided. If your fans liked the matchup so much, then book the quickest home and home that you can, which would probably be a few years down the road and be a fresh matchup instead of a stale grudge match that would solve or settle nothing. Our sport needs more exciting out of conference matchups, but this wasn't the right one.