Where Do We Go from Here?

Share All sharing options for: Where Do We Go from Here? 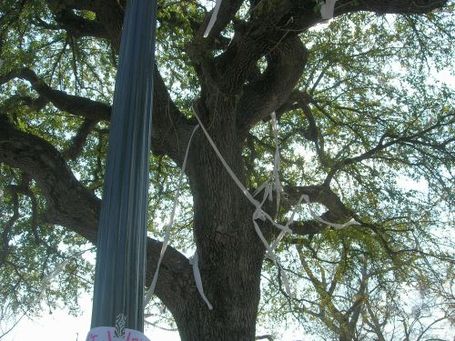 The sky is still the limit for this athletic program!

On a morning after a second consecutive loss to the Alabama Crimson Tide, it would be easy for this Tiger to be glum. As usual with this year's Auburn basketball team, we applaud the effort, but not the end result. Auburn led most of the game, but in the end too many players fouled out. Towards the end, we saw balls dribbled off feet, and air balls on free throws.

I greatly enjoyed watching a home basketball game last weekend in the new Auburn arena with my fellow TrackEmTiger.com writers, but I was not enthused by the number of empty seats on a big day on the Plains. 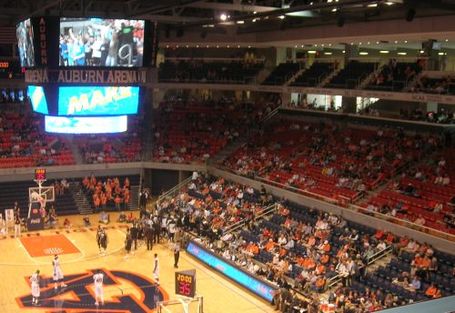 Serious congratulations go out to the Men's Swimming and Diving Team for winning their 15th consecutive SEC title! There has been a ton of coaching turnover and tragedy in the Auburn swimming family, and yet these Tigers just keep on winning! 15 years in a row! War Eagle!

The Toomer's Corner tree poisoning story continues to get stranger by the day. Harvey Updyke, who is accused of poisoning the trees last December, has had great difficulty retaining an attorney. I'm no lawyer, but I'd assume that most of the state's practicing defense attorneys have more profitable things to do than defend a penniless client who confessed the crime on a nationally syndicated radio show. Updyke has had at least two court appointed lawyers beg off due to conflict of interest. He apparently could not get along with a third.

Updyke's latest lawyer, Glennon Threatt is a curious choice. The last time Threatt was in public view was when he unsuccessfully defended former Birmingham Mayor Larry Langford on corruption charges. Threatt pursued the VERY questionable strategy of requesting a change of venue in the Langford case, which resulted in the trial taking place in Tuscaloosa. Threatt moved the trial from Birmingham, where Langford won the mayor's office by a landslide 80% vote, despite BEING ALREADY INDICTED! Moving that trial away from a potentially adoring jury pool was bizarre, at best, and Langford is paying the price in Federal prison. At this time, Threatt says he has no plans to petition for a change of venue in the Updyke case.

My guess is that Threatt is working on a plea deal. No one with a clean record goes to jail on a criminal mischief charge. They are just trying to make sure federal charges don't come down the pipe later, after a guilty plea. The most likely result is that the troglodyte crawls back under his rock when the smoke settles on this one.

It's still a full month till spring football camp begins at Auburn, but open season on Auburn's football chances started the day after the BCS Title game. I continue to hear every day that Auburn will fall far in 2011. Thus far, national writers who've published early polls have Auburn around 25th in the nation, which is probably fair considering Tiger losses from the squad. Did you know that no SEC Champion has repeated the feat in a dozen years? The last team to do it was Tennessee, wining the league in 1997 and 1998.

How has Auburn fared the year after a championship? The Tigers have finished either undefeated or SEC Champions nine times since the league formed. In the previous 8 follow-up seasons, the Tigers have compiled a 71-18-3 overall record. That's a 78 percent winning percentage. In SEC play the total is 43-10-3, or 79 percent. The idea that Auburn will fail in 2012 has no historical precedent. The worst the Tigers have finished after an SEC title is 9-4, in 1984, and it took a Bo Jackson separated shoulder to do that. Since splitting into divisions in 1992, the SEC Champion has posted 166 wins, 62 losses and a tie. That includes Bama's 1-12 forfeit season in 1993, too. That's a 72.7 percent winning percentage for the defending SEC Champion.

One player does not win a football championship. It takes a team-deep commitment. The success of defending champions reflects that. Championship teams have great players well down the depth chart, and the 2010 Auburn Tigers are no exception. I expect at least a half dozen break-out stars in 2011, starting with quarterback Barrett Trotter. This guy has been "almost" the starter for three straight seasons. Now he finally gets his chance. Remember, in 2008 they were thinking of pulling the redshirt off of Trotter. In 2009, Trotter was pushing for a starting job before a knee injury. Last season, he pushed Cam Newton for the starting job in spring drills. Trotter is ready, and he's going to be big-time. Mark it down!