Share All sharing options for: Linebackers - A Look Forward 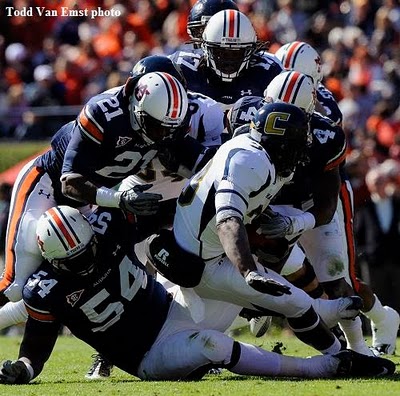 Thanks to Andy Bitter, and Todd Van Emst for photo

The defensive question mark of Auburn football in 2011 isn't going to be how to replace a Lombardi Award winner.

There was plenty of questions as to the talent in the defensive backfield, and plenty of talent was added with arguably the best DB recruiting class in the country, so that shouldn't be a big worry for next season either.

There is however, going to be one big question, that has to be answered and quick.

It's going to be how do you replace two senior linebackers that were iron men in that position for two solid seasons.

In the picture above is #21 Eltoro Freeman, #17 Josh Bynes, #46 Craig Stevens, all played linebacker the past two seasons. Only Freeman returns of these three.

Eltoro Freeman has been a mystery to figure out, while at the same time a fan favorite. Who could forget his initial interview with the media when he uttered this, "I wasn't recruited by any one coach, Tubberville didn't offer me a scholarship, Auburn University did. They kept in contact with me" He had gone the JUCO route, "My scholarship didn't have a coaches name on it, it had Auburn University on it, so when I was down they stayed with me, so I thought I would stay with them when they were down". That statement meant more to Auburn fans than anything else at the time.

The school had just hired a new coach, and an entirely new staff along with it. The fan base needed a positive sign. No, they were starving for anything positive, and in steps Freeman with that quote "They stuck with me when I was down, so I'm going to stick with them". An instant hit, Freeman was All IN.Then a funny thing happened on the way to the starting position, Freeman wanted to impress the coaches so much, he tried too hard. I know what you are thinking, He tried too hard?!? This writer clearly has lost his mind. Freeman was trying to make the big play, instead of playing within the system. Now that he has cleared that hurdle, his improvement was dramatic, and clearly evident.

One of the hardest hitters on Auburn's defense, Freeman is now the leader at the Linebacker position, Coach Roof has complete confidence in Eltoro, and after the Georgia game, awarded Freeman with the start against heated rival Alabama, and Freeman delivered. 6 tackles, 2 for a loss and 3 assist and probably the best game ending video of the season for Auburn.

Daren Bates will be back, and he has plenty of playing time, although many believe he would be better suited moving back to safety, his natural position. Until the coaches announce any such moves however, he will be listed as linebacker.

Harris Gaston also returns. He made major strides last season and figures to compete for some playing time.

Auburn recruited a couple of standout high school linebackers, and they will get a chance to earn some playing time, but the road is going to be tough. Last year's recruiting class had a trio of linebackers that had the faithful filled with anticipation. With a total of eleven underclassmen listed at the LB position, I have no doubt that someone will step up and win the other two starting spots. The big question will be how quickly some quality depth can be developed.

Jessel Curry and Jake Holland each has playing time albeit little, and there is a question as to Jawara White's situation that has not been clarified officially by the University.This is going to be an interesting spring, to see who comes out as the early favorites for playing time at linebacker. Worthy of our attention will be the continued improvement of Freeman, the placement of Bates, who wants the middle position, and who are going to be the backup to these. Let's hope Coach Roof has the right group of young men to answer this one big question of concern. Who wants to play?

Now on to the video competition. Last week Young IE handily defeated the def drum productions BCS title video. So the winner goes on to week two. This week Young IE will go up against Earl Mannings "Big Cam" done to the music of "Big John" The Jimmy Dean classic.