Showing off for the Pro Scouts

Share All sharing options for: Showing off for the Pro Scouts 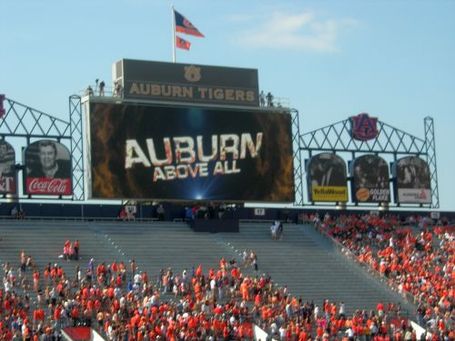 One last time to work out in Jordan Hare Stadium!

War Eagle, everybody! Auburn's Pro Day came and went yesterday, and more than 20 former Tiger football players showed their stuff for about NFL representatives. While Cameron Newton and Nick Fairley generated the most attention, a few eye-popping numbers were posted by others. There continues to be the impression nationally that Auburn's national championship was solely the work of one or two players. The fact is that the 2010 Auburn roster featured quite a few good players.

Yesterday was Cam's chance to make up for a perceived lack of accuracy at the NFL Combine. Newton still had a tendency at times to sail out routes and deep corners, but he hit about 55 out of 65 throws on the day. Throwing to the familiar contingent of Darvin Adams, Terrell Zachary and Kodi Burns had to have helped. I don't think Cam will be the first player selected, and it will be interesting to follow those teams that pass him over in the first round. My guess is that several years down the road, NFL analysts will be making fun of those organizations because they didn't pick Cam!

I think defensive linemen have the most difficult time showing what they can do in a non-game situation, but Nick Fairley didn't do anything to hurt his draft status. I think maybe some teams have backed off from picking Fairley at the top of the draft due to a perceived "JUCO work ethic." That may or may not have been true prior to 2010, but I think the light clicked on the past season for Fairley in terms of taking care of business. I don't think teams are going to have to worry about Fairley showing up to camp out of shape.

Speaking of defensive tackles, Zach Clayton turned in some great numbers yesterday. He turned in a 40-yard dash time of 4.68 seconds, which is unheard of for a tackle! Clayton finished tops in bench-press (225 pounds) repetitions with 27. Clayton also posted a 10 foot standing long jump, and a 33.5 inch vertical leap. My guess is that there's a few teams out there that can use a 299 pound tackle with that kind of ability. Clayton was the unsung hero on the d-line last season, and lots of folks don't realize that teams had to double team him quite a bit.

I think Antoine Carter is the only other lineman that really has a chance to end up in the NFL. Both Carter and Michael Goggins posted 40 yard dash times around 4.6 seconds, which is middling for NFL defensive ends. Goggins and Blanc were not starters down the stretch, and I think scouts will question that. Linebackers Josh Bynes and Craig Stevens are also possible draftees, although I'd have to think Bynes' one 40 time of 4.82 won't help him.

Two members of the much maligned Auburn secondary attended the workout, and I think Zach Etheridge helped himself with a couple of 4.5 second 40 yard dashes. The perception last season was that Etheridge was a solid run defender, but was a liability in coverage. Still, I think there's room somewhere for a hard-hitting safety with that kind of speed. Demond Washington showed his blazing speed with the fastest 40 time of the event, at 4.30 seconds. We knew he could FLY! I used to question whether a small corner could play in the NFL, and Washington measured only 5 feet 8 inches tall. However, former Tiger Jeraud Powers is about that size, and he got a ton of playing time in the league last year. Who knows? Washington may end up being a kick return specialist.

The trio of Auburn receivers made up a great, national championship unit last season, but how will they stack up in the big league? Physically, Terrell Zachary is the most impressive, with a 4.4 40-yard dash time. Kodi Burns' high 4.5 times might keep him out. Adams was Auburn's best guy at getting open, and I think someone will sign him, although there are a lot of good receivers coming out of college this year.

I would have been interested to see the 40 time of the lone Auburn back that participated, but Mario Fannin was not posted. We've seen his speed on the field, and he did run a 4.38 at the NFL Combine. You'd have to think there is a place for someone who can run like that and is 230 pounds. Much like last season, I think lots of teams could use Fannin as a 3rd and long shotgun back. Fannin keeps quarterbacks safe, and will be a bargain at the league's rookie minimum.

Here's to the departing Auburn Tigers, and may they all have a great career going forward! War Eagle, guys,and good luck! For a full breakdown on Pro Day, see the Auburn website here. I'll be back next week to take an in-depth look at the Auburn football team going into spring drills. Spring practice is scheduled to start March 23rd. I can't wait!