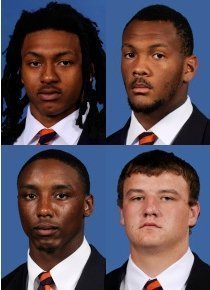 On Friday, March 11, 2011, the Auburn Police Division arrested four people and charged each of them with five counts of Robbery 1st Degree, one count of Burglary 1st Degree, and one count of Theft of Property 3rd Degree. They are identified as Antonio M. Goodwin, age 20, Kowaski Q. Kitchens, age 19, Michael A. McNeil, age 22, and Harrison D. Mosley, age 19.  All list an Auburn address.

At approximately 12:25 a.m. this same date officers responded to a residence located in the 2300 block of Lee Road 137 (Wire Road) in reference to the report of a robbery that had just occurred.  According to the five victims present, three black males entered the residence with one displaying a handgun.  Personal property was stolen during the incident.  No injuries were reported.  A patrolman responding to the area observed what he believed to be the suspect vehicle based on a description he was given.  Officers stopped the vehicle in the 1200 block of Wire Road and four suspects were taken into custody.  A pistol and the stolen property was recovered at the scene.

Goodwin, Kitchens, McNeil, and Mosley were transported to the Lee County Detention Center where each is currently being held on a $511,000 bond.

Wow. First time we've had something like this happen in a long while. This doesn't look good for these players. I'm sure their dismissal from the team will be complete by the end of the day. What could they have been thinking so close to the start of spring practice?