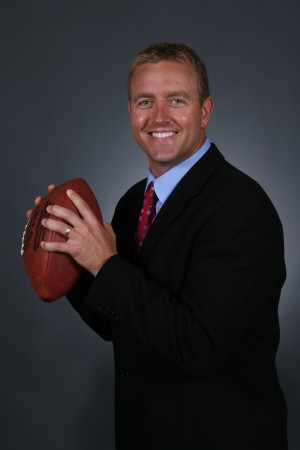 Over the weekend, there was this little gem about ESPN College Gameday/studio host and game announcer Kirk Herbstreit announcing he is moving from his home town of Columbus, Ohio--and the home of Ohio State University--to NashVegas of all places. He is being driven from his home base by a vocal minority of "relentless" Buckeye fans, who supposedly don't take too kindly to his non-homer, on-the-air TV posturing, and are calling for a more biased tone from the former Ohio State Buckeye QB and captain and current ESPN superstar. Listening to the story today on Atlanta radio, the final straw is that the vitriol has even spread to his wife and family when they are recognized out in public in Columbus.

Are you kidding me? Has college football gotten so out of control with hate that a vocal minority of a team's fanbase can cause such an abrupt decision to be made by the literal golden boy of your program? If we thought CFB ploitics here in the south were bad, we haven't seen nothin yet, apparently.

What might possibly be confusing these mishappen Bucks fans is the fact that Herbstreit does do local sports talk radio in Columbus from 1-3pm and they might be expecting what would logically be a more prominent OSU stance to carry forward when he goes on the tube in the fall on ESPN and ABC. And maybe that's too confusing for the average fan. Maybe this is ESPN's fault for not putting their foot down. They may have allowed Herbstreit to sink down from being a national CFB figure back to a local one. Regardless, you wouldn't expect this kind of behavior if he was doing afternoon drive time for and lived in Ann Arbor.

I like Herbie and think he does a great job at all of the tasks he's required to perform, whether it's co-hosting College Gameday, doing studio analysis, or actually providing color commentary during a game telecast. We all know he's an Ohio State alumnus and probably most of us still think of him as being pretty unbiased in that third job description, and isn't that all that matters while you're watching a game?

While it's hard to think of studio analysts as 'journalists', a game announcer would come the closest to qualifying if you meant to find someone ON TVand not in print. Analysts by definition come equipped with opinions, and opinions are rarely un-tinged with some bias.. However, some accuse networks of having an agenda, but seldom will you hear an individual accused of it. Regardless, Herbstreit doesn't fit that description in my opinion. While he's unabashedly proud to be a Buckeye during the appropriate times, I don't see any signs of homerdom when his journalistic credibility on the line. So how could that be a problem for a significant portion of Buckeye fans who have been so nasty to him of late?

Maybe it's hard for Auburn folk to understand because we don't have a person in a similar position. I'd like to think that if we did, we could support that person and realize that he has to serve some form of objectivity in his job performance and best serves the image of the university by being as professional as possible.  I would hope that we could be comfortable enough with his and our own fandomhood to realize that he doesn't have to cough out 'War Eagle' every few sentences as he speaks on air and still represents the alma mater just fine.

Actually, no other school in the country has a similar predicament as Ohio State does with Herbstreit, with his vitality, omnipresence in the sport, and durability with TV and radio gigs. But since we're talking about ESPN, maybe another team might have someone close to a Herbstreit, and you wouldn't have to look far to find that would be Alabama and Rece Davis.

Yes, Rece never played football in Tuscaloosa, so probably a bad analogy there, and he directs the analysts in the studio with him rather than contribute alongside them. Most Auburn folk probably first heard of him over at WRBL in Columbus, Georgia back in the early 1990s. But as a studio host, Davis must have more objectivity than the other talking heads and he performs that goal admirably. Even if the network gave him a true analyst or full-time announcing job I think that I'd trust him to even cover Auburn with spotless professionalism. Also, while Herbstreit's alma mater is widely known, I've never heard Davis's mentioned once on the air.

But what if Davis was more like a Herbstreit and did some off-season talk radio out of Birmingham or Tuscaloosa? Could Alabama fans, who are, respectfully, demanding at times, see the difference? Strangely, I think so. Call it southern manners or something equally vague, I think they would respect the differences between the homer and the professional and give him any leeway warranted. I think every SEC team would act similarly, with the possible exception of Florida.

But with this latest nastiness in college football now out front and center, perpetuated not by rival fans but by the same ones wearing scarlet and gray into 'The Horseshoe' every Saturday, where will it end? Certainly CFB is the most passionate sport in the land, but is it starting to get out of hand in this age of Twitter, sports blogs and the 24/7 news cycle? We are fond of saying that our sport is like a religion, but how soon will it be before we have to say that our sport is hate, and not the good old-fashioned kind?

Buckeye fans: most of you don't agree with this treatment of Kirk Herbstreit, but this one-two punch of Tressel-gate and Herbie the HateBug is the worst black eye for your program since the literal one given to a Clemson linebacker by Woody Hayes. Time for a reality check. If you can overcome finally beating a SEC team in a bowl game, getting your fan house in order should be easy as pie.