Bruce Pearl Out at Tennessee For Bringing NCAA Heat. What if He Were a Football Coach?

Share All sharing options for: Bruce Pearl Out at Tennessee For Bringing NCAA Heat. What if He Were a Football Coach? 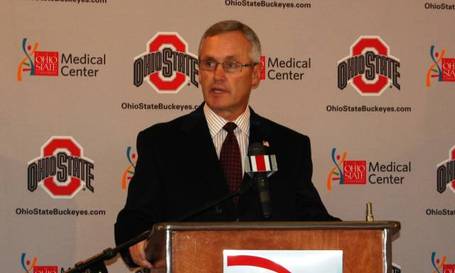 Just wait a minute and I WILL connect the dots.

Word came Monday afternoon that Tennessee basketball coach Bruce Pearl is out in Knoxville. After a series of investigations by the NCAA, the best bet is that university officials like their chances in front of the infractions board in June if Pearl is no longer the figurehead of the program. The man who led the Vols to six straight NCAA tournament appearances was told yesterday afternoon that his services were no longer needed. Pearl coached his last game after the Vols were put out in the first round by Michigan last week.

Pearl initially was on the hot seat after he failed to report a 'bump' secondary recruiting violation after exchanging greetings with a recruit at his high school last year and was forced by SEC commissioner Mike Slive to be suspended for the first seven conference games this past season. Things got dicier for the coach after he lied to investigators after hosting junior recruits to his house for a BBQ this past fall. The NCAA sent their official letter of inquiry in September and Vol heads put Pearl on notice.

And with recent mention of possibly even more allegations coming forward this month, officials at UT, who were initially supportive of Pearl, evidently saw the writing on the wall for their wildly successful basketball coach and decided to bail. Maybe even covert Paul Finebaum tapes emerged where he accused the Vols of "cutting corners"?

Pearl's immediate success was a boon for both the program and the conference, but his reputation for being one who played fast and loose with the rules finally wore thin with university officials. While Vols fans were overwhelmingly in support of Pearl, the administration sought to take the high road and preserve the integrity of an athletic department that's taken quite a few hits lately between football and basketball.

Okay, sucks to be a Vol right now, and I can feel for them because who didn't like Pearl? Wish Auburn would have had that same energy in our program during that time. But a basketball program like Tennessee couldn't take the heat for a coach who not only pushed the envelope with recruiting, but outright stone-walled and lied to NCAA investigators, too. Could any SEC basketball program take that kind of heat? Kentucky, maybe? Perhaps all of the former and only a little of the latter?

But what if we weren't talking about basketball and were discussing football instead. Would not only the fans' but the administration's tolerance for shenanigans be any higher? My take? You bet your Kiffykins it would.

Not to dredge up the memory of the boy wonder any more than is necessary, but his penchant for secondary violations is legendary, especially considering his super-short tenure in the SEC, and the verdict is still out on what penalties Tennessee must ultimately pay for their west-coast experiment. Does anyone remember the Vols publicly haranguing Kiffin while he has running up the tally? Can anyone deny that the stakes for football would be 5X higher in our conference? Then at what point do you draw the line?

Maybe a little light was shed about a similar situation of a big time coach's integrity during the breaking last week of Tressel-gate, where Ohio State HC Jim Tressel was shown to have received email notification of improper benefits given to his players months before the season began and he failed to inform anyone higher up of that accusation.

The benefits story broke just before the bowl game and was big enough in itself, especially with the controversy concerning when the five Buckeye stars would begin their five game suspensions. Tressel, still mum on his knowledge of the incidents beforehand, wasn't found out until the attorney investigating an underlying case came forward detailing how he had emailed Tressel the details. For the mild-mannered, straight-laced Tressel, the jig was up.

During his press conference, looking like the proverbial cat who swallowed the canary , the coach whose last book invoked God in the title was only out-ridiculed by the comments coming from Ohio State chancellor Gordon Gee, who Little Sisters of the Poor-mouthed his way into the presser hall-of-shame with the memorable quip when asked if he might dismiss Tressel, "I just hope he doesn't fire me". Oh, gag! I'm surprised Gee didn't try and give Tressel the anachronistic promotion to AD while he was at it.

So a goody-two-shoed popular coach of a major football program gets caught breaking a major rule by failing to instill institutional control of his program and his chancellor gives him the administrative equivilant of a hand-job. Wonderful! Do you still have any doubt now of how a SEC football program might handle the pigskin equivilant of Bruce Pearl? I sure hope not, especially given the demonstration last week of just how intense a mancrush that a member of the alledgedly impartial media can have on a coach like Nick Saban. With the pushing of the recruiting envelope, Saban is the football equivilant of Pearl but don't make the mistake of thinking that Saban is the equivilant of Tressel. Saban doesn't promote himself as the choir boy and is a whole lot smarter than Tressel--even if he doesn't write books.