Myriad Questions for the Tigers.

Share All sharing options for: Myriad Questions for the Tigers. 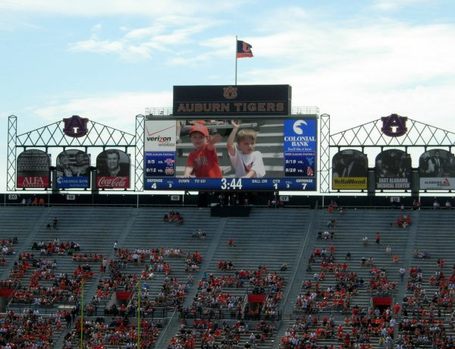 This spring Auburn will once again have a young football team.

War Eagle, everybody! The short sleeves are out, a coat of yellow dust is everywhere, and buds are blooming all over. That means it's time for spring football! When discussing spring practice, many writers like to make short lists of questions that the football team hopefully answers with a month of practice. With this Auburn team, there are questions at just about EVERY position. Auburn returns only 3 defensive and 2 offensive starters.

On a senior-laden team, Auburn has lost 37 football players between the BCS Championship Game and the start of spring drills. With only 52 scholarship players on the roster, and injuries sure to occur, I'd expect a return to "offense vs. defense" in the A-Day Game. The latest batch of players revealed to no longer be on the team include receivers Derek Winter, and Phillip Pierre-Louis, lineman Andre Harris and tight end Robert Cooper. Of this latest group, only Derek Winter played at all last season.

On the defensive line, only strongside end Nosa Eguae returns as a starter. The Tigers also lost their top three defensive tackles. Freshmen tackles Jeffery Whitaker and Kenneth Carter did get some playing time last season, and some good lessons. Likewise end Corey Lemonier got in about 10 percent of the time, and improved as the season went on. They'll need to step up a whole lot more to star in the SEC. Re-watch the first touchdown of the Iron Bowl, where Mark Ingram goes up the middle untouched. Auburn had a lot of those youngsters in there on that play.

The first day of practice saw Darren Bates, Jake Holland and Jonathan Evans starting at linebacker. Second team seemed to be Jawara White, Eltoro Freeman and LaDarius Owens. There is some experience there, and even depth with Freeman coming off the bench.

The secondary will be completely rebuilt, with Neiko Thorpe moving to safety. This is something we've seen Gene Chizik do before, when he moved Junior Rosegreen to safety during the Tuberville Era. Thorpe's physical enough, and he does have decent hands. With rising speed-demon sophomore Demetruce McNeil also on the field, Auburn looks to have a pair of safeties with closing speed and a chance to grab some balls. T'Sharvan Bell and Chris Davis appear to be getting first cracks at the starting corner spots. Both have speed, but they are also relatively small. Don't be surprised if incoming freshman Jonathan Rose unseats someone. He's enrolled early, and is practicing with the team this spring.

Special teams will have to be restocked. Return men Onterio McCalebb and Quindarious Carr do return, but there's a whole lot of youth behind them. Kicking and punting duties will be turned over to Cody Parkey, and Steven Clark, respectively. Both of those sophomores did get some playing time last fall.

The offensive line is a huge puzzle. One would have to assume that the likely starters at tackles would be Brandon Mosley and A. J. Green. We saw that combination in the second half of the Mississippi State game last fall after Lee Ziemba left the game with an injury. It was not pretty. We were torched on the edges, and again in the first half of the Clemson game against All-American Dequan Bowers. Mosley improved by leaps and bounds after that, while Green rehabbed an injury. John Sullen will likely fill one guard slot, but the other is wide open. Redshirt freshman Eric Mack took the first reps with the ones yesterday. Blake Burgess and incoming freshman Reese Dismukes should wage a good battle for the starting center position.

Right now, the tight end is Phillip Lutzenkirchen, and it's a great mystery who'll back him up. I think the coaches would like to continue to move him around, like last season, but they'll have to develop someone to go in that spot vacated by Kodi Burns. Redshirt freshman Ladarius Phillips seems to be getting first crack at the H-back slot, and I know a lot of folks are excited about having a 290-pound lead blocker.

Last year I was of the opinion that the deepest position on the team was the receiver corps. In the past year, we've seen the loss of Jay Wisner, Darvin Adams, Terrell Zachary, Kodi Burns, Derek Winter, Antonio Goodwin, Shaun Kitchens, and Phillip Pierre-Louis. Right now, the two deep outside looks like Emory Blake and Quindarius Carr, backed up by Deangelo Benton and Travante Stallworth. Trovon Reed looks healthy, but it's not clear where he'll play. I would not be surprised to see Ralph Spry make some noise.

Tailback looks set at the top, with Michael Dyer and Onterio McCalebb returning. There's no depth behind them, which is why coaches have moved Anthony Morgan there. I'd expect to see a LOT of walk-on rushes on A-Day. Coaches can't risk getting Dyer or McCalebb hurt.

The quarterback position is a two-man race, between Barrett Trotter and Clint Moseley. All indications are that Moseley has made up a lot of ground in the offseason, and has done quite a bit of growing up. The only other quarterback getting reps is walk-on Logan Paul. There continues to be talk of incoming freshman Kiehl Frazier pushing for a starting job next fall. I think that if that happens, it means we're in a whole lot of trouble offensively. With two talented guys who are veterans in the system splitting the reps, they should know this offense cold by fall. I just don't see any newcomer picking up the Malzhan playbook and starting in a couple of weeks, unless the other quarterbacks are really struggling.

This season will be a real test of the staff's coaching ability. With two top-five recruiting classes, there is talent at Auburn. It should be really interesting to see how it is developed. It's a rebirth for the Tigers this year, with a very different team in the making. We'll have to see where it goes!