News from around the Plains

Share All sharing options for: News from around the Plains 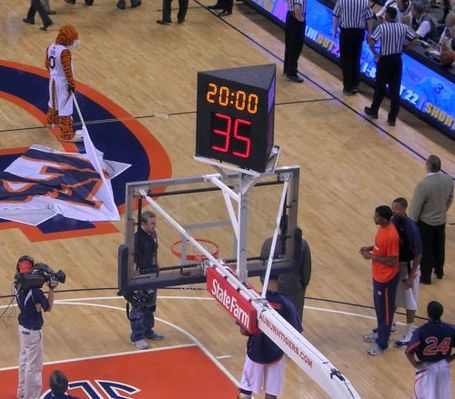 It's a happy ending at home for the Auburn roundballers!

War Eagle, everybody! March is here, folks. The Bradford pear trees have bloomed, and everybody's noses and eyes are burning. The basketball team has played its last home game, and spring football is just around the corner. The football team says goodbye to one of its own, and welcomes another Auburn great back. It's another week, and yet another Cam Newton story in the media. I can't believe we're still talking about Cecil Newton here in March!

First off, congratulations to the men's basketball team for a dramatic comeback win over the Ole Miss Rebels last night! The Tigers won, 76-73, after trailing at the half 41-25. Kenny Gabriel got hot, and started raining 3 point baskets to start the second half. The Tigers erupted for a 29-9 run in the second frame, and erased the deficit. Ole Miss got in foul trouble in the late going, and Auburn took advantage with Chris Denson and Rob Chubb attacking the rim from close range. With 21 seconds left, Ole Miss closed to within 74-73, and fouled Denson. The freshman cooly sank both free throws, and the Auburn defense held on. This team might not have won many games, but they have come a long way in a few short months. I can't wait to see what a beefed up squad will do next fall, with Tony Barbee at the helm!

Like many of you out there, I wondered who in the world would be able to replace Tracy Rocker as Auburn's defensive line coach. I should not have worried. Head coach Gene Chizik has made another slam-dunk hire. Auburn welcomes back All-SEC defensive lineman Mike Pelton as the new line coach.

Pelton can draw upon his own experiences as an Auburn player to mold defensive linemen. Pelton arrived at Auburn as a skinny, undersized linebacker. He played a bit in the waning years of the Pat Dye era, but slid down the depth chart in 1992. Early in 1993, Pelton was re-born as a defensive tackle. He entered the playing rotation quickly in the season opener against Ole Miss, forcing and recovering a fumble. Pelton was an integral part of a tough defense that fueled Auburn's undefeated season in 1993. In 1994, Pelton was a dominant starter and iron man who played nearly every meaningful snap. With Pelton in the playing rotation on the defensive line, Auburn won 20 straight games.

Big Mike's coaching resume is impressive. His first serious gig was at Troy, under Larry Blakeney. As the line coach for the Trojans, Pelton mentored Demarcus Ware and Osi Umenyiora, who are now both NFL stars. Pelton proved to be a great recruiter, and showed the ability to develop big-time talent. Pelton hooked up with Gene Chizik at Iowa State, then spent last season at Vanderbilt working for Robbie Caldwell. I believe the young Auburn defensive line is in great hands with Mike Pelton!

Negative Auburn news, after the jump.

The toughest "real" news out of Auburn is the dismissal of starting H-back Eric Smith. Gene Chizik evidently made the move after a February 22nd arrest for domestic violence. Smith has had a checkered history at Auburn. He was a nasty blocker and solid receiver in Gus Malzhan's scheme, as well as a stalwart special teams participant, but off-the-field troubles plagued him. Smith was arrested back in August 2009 for his role in a bar fight, and that incident led to a suspension. Smith then was academically ineligible for the 2010 Outback Bowl. Smith drew the attention of the nation in the 2011 BCS title game, for delivering the game's worst cheap shot. With the domestic violence arrest last month, Coach Chizik had apparently had enough. Smith's departure leaves only one H-back with experience on the roster: Phillip Lutzenkirchen.

And now in the "dubious news" category, are Cam and Cecil Newton. You'd think with March Madness cranking up, there would be more important things to talk about. But the past week, message boards and talk radio have been blowing up with talk of "tapes" Cecil Newton shopping Cam to the highest bidder a year and a half ago. Seriously, folks? Tapes? Who still uses tapes?

WZZN radio in Hunstville talk-show host Scott Moore is at the center of the latest controversy. Moore claims to have in his possession audio tapes "from several different people" implicating the Newtons. These tapes supposedly came from Mississippi State boosters John Bond and Bill Bell. In addition, Moore has claimed, "We're talking about not one or two tapes here, there's quite a few from several different people."

Now let's review. Last fall, the first source quoted for leaking the story to the press was former Mississippi State quarterback John Bond. Bond spoke to Joe Schad of ESPN. A week or two later, it was revealed that Bill Bell was left a few voicemails by former MSU player Kenny Rogers soliciting money for Cam Newton's services. Bill Bell has continued to insist that he only talked to Kenny Rogers.

Meanwhile, John Bond's story is variable. When asked if Kenny Rogers was who contacted him, Bond said on 680 The Fan radio in Atlanta, "Actually there were two people in between it, but basically yes, that's what happened." Kenny Rogers denied contact with Bond, and said that the two had not talked in over 20 years. A week later, Bond told ESPN, "My story hasn't changed. I absolutely talked with Kenny Rogers, and there are phone records that will show that." Needless to say, we've not seen these phone records, and Bond can't make up his mind whether he talked to Rogers, or "two people in between it."

Now, 4 months later, a radio talk show host has tapes. The first one was released yesterday, and you can listen to it here. Frankly, the recording is a garbled mess. Secondly, the accent on the phone does not sound authentic. I know folks from the South will agree with me here: it's usually pretty obvious when a Hollywood actor is faking local accents. Obvious. Well, that certainly applies to this recording. It sounds like someone covering up a middle East-coast, or even Jersey accent. Most certainly it does not sound like an African-American Atlanta preacher!

Much like the news of Stanley McClover appearing on HBO with Auburn bombshells, we'll have to wait and see where this goes. Personally, I'd recommend to Mr. Moore that he hire a better voice-over actor for the next recording. Not that it's going to help his credibility any! Till next time...