Is There a Santa Claus?

Share All sharing options for: Is There a Santa Claus? 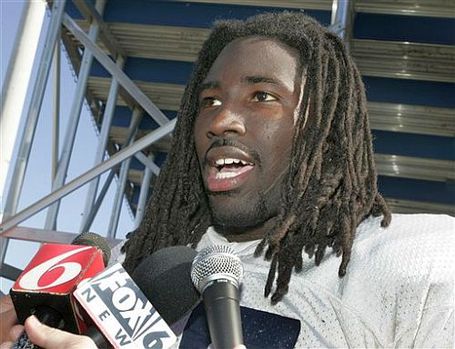 War Eagle, everybody. I suppose by now we should be used to media attacks against the Auburn athletic program. This week, while we should be focusing on spring drills, we're busy fending off criticism generated from an HBO "Real Sports" episode that aired last night. It was painful to watch, but we did know it was coming. The premise of the show, as well as much of the plot was revealed over a month ago. For those late to the party, former Auburn football players Stanley McClover, Troy Reddick, Chaz Ramsey and Raven Gray indicated for the HBO cameras that they were paid hundreds or thousands of dollars by Auburn supporters. Like most unsubstantiated claims, there's almost no way to disprove them.

First off, I'd like to begin by saying that I do not know for a fact whether the allegations are true or not. HBO Sports certainly had little in the way of proof offered in their episode. There were no Auburn boosters or coaches named in the accusations. No canceled checks, no car titles. As a whistle-blower, Eric Ramsey was light-years ahead of these four guys and HBO. As much as we hated what Eric had to say, he did have the goods. If these guys want Auburn supporters to take these latest allegations seriously, tell us who the participants were.

While proof of whether or not $500 handshakes exist remains elusive, we can examine the publicly demonstrated character of those around whom this story revolves. Over 30 Auburn players have come out and stated unequivocally that the charges are horse-manure. These names include Ronnie Brown, Carnell Williams, T. J. Jackson, Junior Rosegreen, Carlos Dansby, Quentin Groves, Lee Ziemba, Ryan Pugh, and a host of others. We're still waiting for the avalanche of former players who'll support the accusations. Or even the first one. Anyone? Are there any other Auburn lettermen out there that will cop to this charge?

It is also worth noting that each year NCAA athletes sign statements assuring that they are aware of the rules and have not received any impermissible benefits. Signing such a document, then later admitting to taking cash demonstrates a fundamental lack of ethics by these players. It also calls into question any public statement they might make. In short, they've branded themselves as liars, and have little credibility left.

Of the four accusers, the statements made by Troy Reddick are the most troubling to me. From his own words, it's clear that he was deeply unhappy during his time at Auburn. From what other players have said, Reddick was a quiet one. His accusation that a coach passed him an envelope of money is the most serious of the allegations. I'd be shocked if the NCAA does not investigate that one. There is a five-year statute of limitations on many NCAA violations, but I'd expect that they'd make an exception if it came to light that a coach was paying players. Troy head coach Larry Blakeney is still living with NCAA sanctions after the "Keep it down home, cuz" events more than 20 years ago.

We can't prove or disprove Reddick's statements. However, I can point out a few things. Reddick claims to have been offered a "large sum" of money to sign with Auburn . Reddick says that he did not take the money, but signed with Auburn anyway. Reddick was adamant about his dislike for the process: "people are trying to take advantage of me, and I don’t give anybody any power over me, ever." Why sign with Auburn, then? This sounds contradictory to me. One further note: Reddick applied for a graduate assistant coaching position last year, and was turned down.

We can't disprove statements by Raven Gray about receiving money, but in light of Auburn's plethora of good defensive ends, it's curious. Auburn's had dozens of high-performing defensive ends in the past decade. Raven Gray was injured during his last year of JUCO play, and had surgery on his knee. I cannot imagine a rogue booster spending thousands of bucks on an injured JUCO player at that position. A defensive end with knee problems is a bench-warmer in the SEC. Gray signed in 2008, and was too injured to participate in spring drills. I can't imagine him drawing a whole lot of money during this time.

Chaz Ramsey's Auburn career ended prematurely with a back injury around the time of the 2007 Peach Bowl. He and his family subsequently sued line coach Hugh Nall, and trainer Arnold Gamber, for supposedly ignoring doctor's orders regarding his rehab. During the media investigation, it was revealed that Ramsey himself wasn't necessarily big on following doctor's orders, taking part in a ski trip while he was supposed to be resting his back. The lawsuit was tossed out of court, basically due to lack of evidence. The Ramsey family definitely has an axe to grind with Auburn, as evidenced here.

Stanley McClover was the most loquacious with HBO interviewer Andrea Kremer, though. He said that he was offered cash by boosters from LSU, Ohio State, and Michigan State, in addition to Auburn. We're also supposed to believe that he choose Auburn after partaking of free sex from Ohio State coeds. That's an accusation that goes far beyond Auburn, broadsiding several big-time programs. Some of McClover's story has already been debunked. McClover claimed to have been given $7000 by a booster for the purchase of a 1973 Chevrolet. Junior Rosegreen has countered that he was there when McClover bought the car, and that McClover used his Pell Grant to pay for it.

HBO has officially stated that they never pay for interviews. Andrea Kremer reiterated that policy on the radio this morning, and also said that HBO never gives out advance copies or transcripts of their shows. I had to look no farther than my email inbox to get my copy Tuesday evening. I'm not even a journalist, but I received the press release. There are DVD copies out there, too, one of which was analyzed by Phillip Marshall over at Auburn Undercover. Ron Sanders over at AUC has stated that he has it on good authority that the McClover interview was scripted, and McClover cooperated for compensation.

The question now becomes, what compensation? Well, for one thing, HBO agreed to televise Stanley McClover's Big Brother event back on February 27th. Radio station 97.1 TheFan FM in Columbus is taking it a step farther. They claim that McClover was paid $20,000 by HBO for the interview.

There are few winners in this saga. The Auburn administration is once again in the position of defending themselves from unproven (unprovable?) allegations from questionable sources. Other universities are also tainted by this HBO show. The 4 players who participated may or may not have received a bit of money for going along with it, but that's trivial. What they've done will haunt them long after that bit of cash is gone. The only real winners in this sorry story are HBO, and other tabloid outlets who will likely enjoy a surge of traffic.

There's really little to be done but for the Auburn Family to endure this. We'll have another wave of negative publicity, and we'll survive it. And should the allegations be proven true, Heaven help the guilty. The wrath of the Auburn faithful is no small thing! Just ask David Housel and William Walker... The NCAA may look into it, and without credible evidence, it will remain another perpetually open case like the Cam Newton saga. The real question that I have is this: How badly does this cumulative bad-press stuff damage Auburn recruiting efforts going forward? Only time will tell.