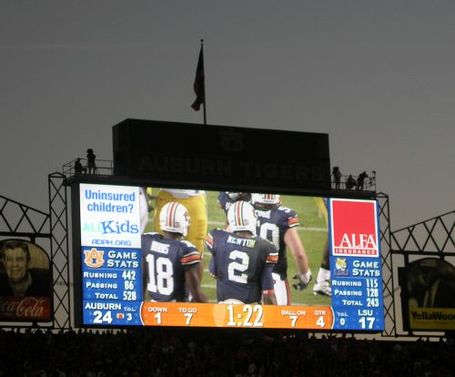 I have had enough of this media circus, and all the attacks on Auburn.

We have nimrods who do not even know Cameron Newton telling us he has psychological flaws with his character. Then our coaching staff is having to defend the Heisman Trophy winner on national  radio, when this type of attack is "absurd".

Morons as far away as Orlando, FL whose real job has them covering MMA events, weighs in with his own opinion of just how guilty Auburn is of all these allegations, and what the NCAA needs to do to punish Auburn athletics.

That's just been this past week!

Are you starting to see the trend here? If we were to rehash the entire Cam Newton saga, we wouldn't be able to get these blunder-heads to understand the truth of the matter.

Just like the pot stirring head coach in Thibodaux, LA who went around mouthing off lies about Auburn's recruiting, then when the NCAA gets to asking him about those accusations, he changes his story.

Not one of these brave wanna-be journalists, had the guts to cry foul. Not one of them went out of their way to signal to the world, that that coach has ties to LSU. Why?

Somebody please explain to me how Alabama or Miss. State fans could even raise their heads to speak about how guilty we are. While you are at it, explain also how the Georgia Bulldog faithful can point a finger anywhere but in the mirror when pointing out athletes misbehaving, or breaking the law.

Not one of those institutions has the right to wish a death penalty on Auburn. If it were to get handed down by the NCAA in order of transgression, the NCAA would have to form a long line of our brethern SEC schools before it had time to get to Auburn. Tenn., Bama, THUGA, and MSU would all be put ahead of us.