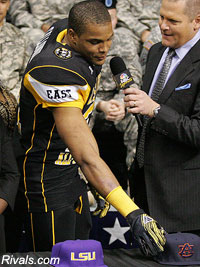 While many of you are no stranger to a deluge of internet-based accusations concerning various programs in college football, the trick for us editors comes at what point rumor actually becomes a story worthy of mention. Having been a contributor on here for three years, I've seen my share of opposing teams' dirt go flying by, and a little of our own, so in the wake of the Cam Newton controversy, mention of an investigation in Thibbadeaux, the Stanley McClover allegations and the recent unfounded charges made by Scott Moore, my stance has considerably narrowed to those items I feel meritorious of mention on this page. Sometimes the mere reporting of an incident can attract fierce vitriol from rival fans as they seek to defend the faith of their school, something to which more than a few of us on here can relate.

So last Thursday's reporting on the Rivals Auburn site by Jeffrey Lee of allegations of payment and improper benefits to Russellville LB standout Brent Calloway could have served as a temptation to deflect some of the recent heat  away from us and into the face of our chief rival. Calloway, a 4-star Rivals recruit ranked as the #4 linebacker in the country, had initially committed to Alabama early on. But shortly before national signing day in February, he de-committed to the Tide and switched to Auburn, only to switch again back to Alabama again, under what some say were strange circumstances.

The initial allegations by Lee were that Calloway was taken out of state and to Tuscaloosa multiple times by an Alabama booster and that this booster had also paid Calloway's adoptive father, 'Peaches' Winston, $2500 to secure the de-commit from Auburn. Calloway was alledged also to have been promised a salary of $1200 per month while in school at the Capstone, and was said to have taken delivery of a new car from one Bama supporter provided by another who is a dealer in Muscle Shoals.

But given that none of these allegations were sourced nor were too many specific details provided, it reeked of another Scott Moore-like affair, and so it sat with us. Until this week.

Yesterday, Jeffrey Lee came back with way more details, and this story hasn't quite been put to bed. Many of these details were provided by Tidesports.com, which in turn got many of the details from the Alabama compliance department, which was rushed into action immediately following the allegations on Thursday.

The booster in question has been identified as Darren Woodruff, a Muscle Shoals business owner who claims he's not a booster at all, considering he's not an alumnus nor has he ever purchased tickets for games.  He claims to have had an existing relationship with Calloway, going back to Calloway's freshman year in high school, and considers him like a son.

Way before allegations of impropriety were made, many questioned how Calloway, seemingly secure in his new commitment to Auburn, would flip-flop at tthe last minute back to the Tide. In Lee's account, Calloway was hounded by Alabama coaches leading up to NSD, using his high school coach Doug Goodwin as a go-between. On the last weekend, Calloway had another visit to Auburn scheduled, but Alabama recruiter Jeremy Pruitt ran into Goodwin at the Alabama Football Coaches convention in Montgomery earlier that week and asked him if Brent would be travelling to Tuscaloosa. Goodwin told him that Calloway had said no.

Pruitt then asked Goodwin to arrange having Calloway tell him directly that he wasn't going to go. After a phone call, Pruitt then asked Calloway to tell coach Saban the same thing "so he won't chew me out and will know that I did my job". An hour later, Goodwin said that Calloway had informed Saban as well. Calloway told Goodwin that Saban had pressed him but he still remained committed to Auburn.

Then around 11:30 that night, Goodwin received a text from Calloway. "Coach, I gotta go (to Alabama this weekend). My daddy (Peaches) is making me go, but I'm not changing my mind. I am 100-percent sure (about going to Auburn). That was the last time Goodwin spoke to Calloway before NSD.

So what does that torrid tale have to do with the issue at hand? Could alleged improper benefits be the reason for Calloway's last minute 180? Auburn fans may find it a decidedly convenient explanation, but I caution you to consider everything carefully before rushing to judgement. As with the Cam Newton saga, you can't automatically connect the dots without having evidence, and so far there is none for a pay-for-play scheme, nor the alleged car. Alabama will turn it's investigation over to the SEC, which will in turn to the NCAA.

But one possible angle that may expose liability for the Tide is the role of Darren Woodruff and his relationship with Calloway. He does admit to taking Calloway across state lines to Florida so he could have time to think about his decision, supposedly at the insistence of Calloway's adoptive father, Peaches. While no one would question the role of a relative in this situation, Woodruff seems to stick out quite a bit. What sort of interest would a middle-age white man have in a black teenage football player? Could he be a jock-sniffer at best, or something much worse? Already on probation, Alabama could face sever sanctions if Woodruff was deemed to be acting as an agent of or in concert with the school.

Could Woodruff be a de facto booster of the Tide? Just thinking out loud, assume for a second that boosters did want to influence recruits' choices outside the knowledge of coaches or an institution. Wouldn't it stand to reason to incorporate some sort of straw man with no outward ties to the school that could be traced back? Even better, maybe it could be someone already known to the player who would be in a position to steer him without tipping him off of the undue influence? Could influence peddling in college football have stepped up it's game that much? I shudder to think.

What do I think in my gut? Show me the money trail or what you have is a bunch of naught. Yes, I think there was conflict in Calloway's family about where he should be playing his college ball, but disagreements in the family aren't under the purview of the NCAA. Is it possible that these allegations are true? Certainly, but there must be evidence for it to be proved. This is the new standard that all Auburn fans should now become familiar with if you haven't already. More to come? We'll see.