Five things to look for on A-Day.

Share All sharing options for: Five things to look for on A-Day. 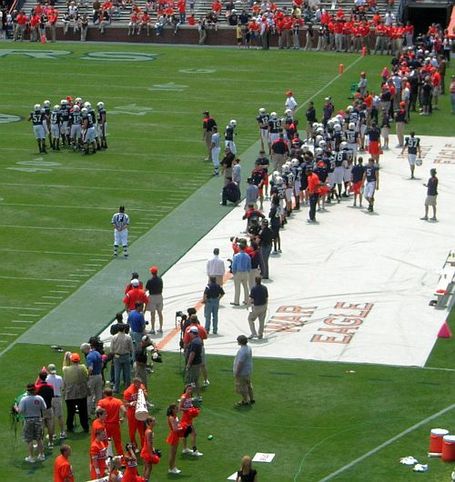 They won't include many fancy schemes.

War Eagle, everybody! We're two days from A-Day! If I'm not mistaken, this will be the first Auburn A-Day in history on live television. We've enjoyed a Sunday replay for a number of years, but this time those of us unable to make it to the stadium will see it as it happens. The game will start at 2:00 PM Central time, and it's on CSS. The game is also on ESPN 3.com, if you're not in the Southeast. Unfortunately, most of the SEC territory is blacked out. For those who do head down for a tailgate in Auburn, keep an eye and an ear on the weather. Some powerful storms are expected to roll through the state Friday night before the game. Saturday should featured near-perfect football weather, with a high around 75. The rain should be long gone by game time.

Before digging into A-Day, I'd like to revisit a great discussion from earlier this past week here on TrackEmTigers.com. Is Auburn's offense a "one-read" offense? Chris Brown over at Smart Football takes on this question, and it's a fascinating story. If you are into the serious X and O stuff, that's your must-read blog!

After watching a couple of Gene Chizik-led A-Days, I think we can expect this one to follow a similar format. It will have more of a feel of a practice scrimmage, with coaches on the field during plays, giving instruction. The contest will be between the offense and the defense, rather than the usual Blue vs. White scenario. Normally, the veteran stars play sparingly on A-Day. This year, we don't have many veteran stars left, so you can expect the projected starters to make longer appearances. With a team this young, the coaches can't afford to waste teaching time. Don't expect a great coaching chess match between Ted Roof and Gus Malzhan. They'll use a lot of base formations and plays. This exercise is about developing talent. So without further ado, here are five things I'd like to see out of A-Day tomorrow.

And there you have it. With a young defense, no blitzing, and playmakers like Michael Dyer, Onterio McCalebb, Quindarius Carr, Trovon Reed, Emory Blake, and Phillip Lutzenkirchen, you'll almost certainly see some big plays. Those will be fun to watch, but meaningless in the greater scheme of things. What will matter is those fundamental things listed above. Will it be a sloppy scrimmage? Or will we show basic competency in the little things? This scrimmage may give us an idea of  what sort of record to expect next fall in the SEC.

We'll be here live Saturday, with an open thread and our usual banter, just like a real college football Saturday in the South! As always, feel free to join in and spout off! We'll see you on A-Day. War Eagle!