Share All sharing options for: Looking Forward - The Quarterbacks-Amended Version 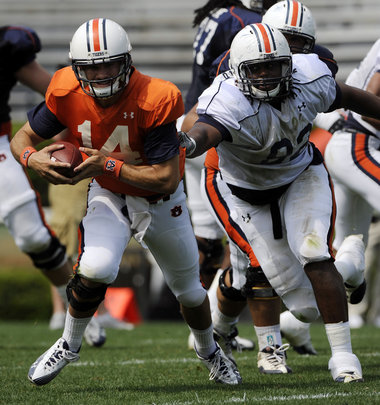 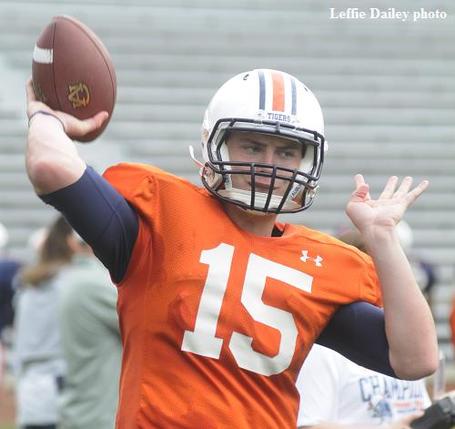 It's a magical time of the year. The flowers are blooming, our vehicles are covered with a coat of pollen so thick, it looks like a bag of yellow flour has dumped on them. The 75th Masters tournament has been played, and a new champion crowned, and there has been news filtering out of Auburn about spring football practice.

All of that means only one thing, a quarterback competition on the Plains.

I can not remember how long it has been since we did not have this subject to talk about, in the spring, at Auburn. One thing for sure, the competition is much different, than in years past.

Different in several ways as matter of fact. For one, the two competitors have developed a close friendship since coming to Auburn. They also have to follow behind the legacy that is Cam Newton. You guys remember Cam don't you? He only won the SEC, The "MNC", and the Heisman Award as college footballs most valuable player. Quite a tall task for either one of these guys considering they have never started a game at the college level.

The two gentlemen involved are #15 Clint Moseley, and #14 Barrett Trotter. Their appearances at the college level, are very short lived. Clint Moseley played in one game, ran the ball twice for 8 yards, and did not attempt a pass. Trotter on the other hand, played sparing, usually in mop up duty in 6 games. He ran the ball 5 times for 68 yards, and a touchdown. Passing, he was 6 of 9 for 64 yards, and zero touchdowns. He does sport an average yards per play of 22.0. That's impressive. What is more impressive is zero turnovers. A trend that will have to continue if he were to be named the starter.

Still both were considered great talents out of high school. Trotter came to Auburn via Briarwood Christian in Birmingham, AL and is third all-time in the Alabama High School record books with 88 TD passes. He holds the record for TD's at Briarwood, and yards passed with 7,968 total.

Moseley was Alabama Mr. Football for 2008 and led his team to it's third straight State championship. He was also MVP of that title game as a senior.

Something about all this should have me jittery and worried concerning QB play next season. Alas, I have partaken of the "Mad Dr. Gustav's" elixir. "Koolaide" if you will. The belief that Gus Malzahn has some inherent formula that breaks the spells and jinxes of the first year QB. Gus has had a new QB in every season he has coached at the college level.

This coming season at Auburn, Malzahn may have his first three year understudy in Trotter, taking the reigns of his misdirection, run first, zone read, offensive masterpiece. In previous seasons it has appeared that no matter who was in the drivers seat, the "Gus Bus" went forward with the power of a bulldozer, and the finesse of a ballet dancer. I'm guessing that will continue.

In an interview session with Gus Malzahn today, we get this quote....

"Just to be completely honest, it’s been fairly close," offensive coordinator Gus Malzahn said of the battle between Barrett Trotter and Clint Moseley. "In my mind there’s not a whole lot of separation."

If I may be so bold, I would take from these quotes that for the most part, one QB has had a better spring. Not everyday mind you, but, for the most part one of these guys has earned his shot at running the club.

I look for a leader to be announced sometime in the near future, with the statement that young Mr. Frazier has an opportunity to come in and impress.

You can read the rest of Andy's post HERE, which includes video of today's interview.