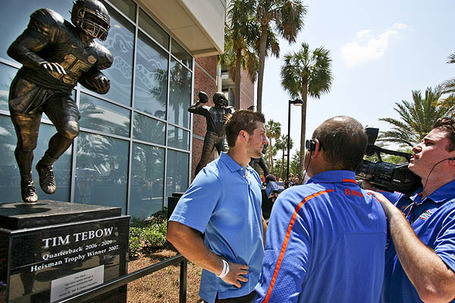 I bet Urban wishes he could've had a Cam statue added, too

It was two weeks ago during Florida's spring game that statues commemorating their trio of Heisman Trophy winners were revealed outside Florida Field. Spurrier, Wuerffel and Tebow, their likenesses cast in bronze, were shown in action poses for the first team in the SEC to have three such winners. No sooner can I get to writing a prediction that Auburn, the second team in the SEC to accomplish the same feat, would soon follow in suit to erect some bronze figures outside Jordan-Hare, but they preempt me and announce on Thursday the Heisman trifecta collection--complete with a bust of John Heisman--to be placed on the east side of the stadium starting this fall. You didn't have to be Carnack to see that one coming.

Naturally, the temptation to compare our Heisman triplets with the timing of Florida's would be the more apt choice, but with so many haters in the state, many decided instead that Auburn was just again copying Alabama. That's right. With no apparent heritage of our own, Auburn looked to mimic Alabama's decision of over a year ago to erect a statue of Nick Saban in bronze outside BDS for winning the 2009 national championship, which was just recently revealed during the Tide's spring game this past weekend. Saban joins on the Walk of Champions such legendary Alabama figures as Wallace Wade, Frank Thomas, Bear Bryant, Gene Stallings and that sports information guy who added all those national championships to the media guide 30 years ago.

Nice touch, by the way, Alabama. Your Walk of Champions is a classy display of Tide glory--I do truly mean that. And although no writer in the state would ever question the timing of erecting a statue to a sitting coach like they might if Auburn did copy you apples to apples, a nine-foot Saban will be a tempting target to tape Cam Newton jerseys to in 2012. I just hate that the sculptor used a young Andy Griffith as a model instead of Nick. 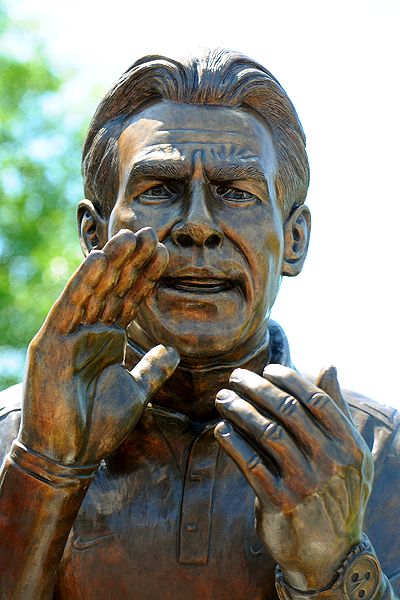 Many have questioned the timing of Auburn's statues, most notably with Scarbinsky's article above where he still openly challenges the legitimacy of everything Auburn the last year. But does he have a point? With the Cam Newton case still not settled with the NCAA, is it too soon to be honoring the one-hit wonder on the Plains?

While many fans of opposing fans still believe that the NCAA is still working feverishly to find any disparaging news about Newton, the reality is that the investigation is basically a cold-case file until some earth-shattering new evidence walks into Indianapolis and reveals itself. And while I'm not personally able to say without a doubt that any such evidence may not come to light one day, Auburn University has no choice but to go on and show proper homage to not only it's Heisman winners from the past, but to it's current one as well. Once the decision was made to go forward, any hesitation or trepidation on the school's part in honoring Newton would be a disastrous public relations hit for us.

What's the danger in honoring Newton, or even Chizik for that matter, for their glory last season? Really, the only thing at stake here if that eventually Cam is declared ineligible is the individual award (the Heisman) and not the team award (the national championship). With the Reggie Bush Incident (RBI) having been adjudicated less than a year ago, the precedent has been established concerning how college football will react to a player being named ineligible years after a season's completion and his team's vacation of games during a national championship season. Bush had to give back the Heisman, but USC kept their national championship. The BCS refused to strip them of their crown and the AP poll refused to do a re-vote. If they had done something, that would have left Auburn as the alternate national champion in 2004, but they didn't.

So let me repeat that for you. Even if Auburn has to one day vacate victories in 2010, that crystal football ain't ever going back.

So does that mean we can erect statues of Shug AND Gene right by the Heisman display? Not so fast my friend. While I might have waited another year before showing the Heisman display, having so many bronze statues situated around Jordan-Hare, someone might next accuse us next of copying the Greeks and Romans.