Another Week, Another Wacky Story.

Share All sharing options for: Another Week, Another Wacky Story. 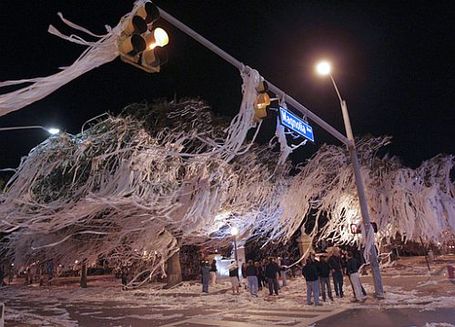 War Eagle, everybody. If you are like me, you have to be extremely sick of the "journalism" surrounding Auburn, Alabama. In this week's "News of the Weird," outlets around the country reported that accused tree poisoner Harvey Updyke was beaten at an Opelika gas station after his court appearance. Like many folks in the state of Alabama, I heard the "news" driving home from work on the Paul Finebaum radio show. I know, I know. I should have stuck with my CD collection! However, one of my co-workers had told me that Bruce Feldman of ESPN.com was going to be on the show, with some analysis of Cam Newton's interview with Jon Gruden. Instead of Feldman, I got to listen to Harvey Updyke's attorney Glennon Threatt.

Even upon first listen, I was skeptical. Updyke got attacked, and whoever did it ran away that quickly? They didn't kick him in the ribs a few times, or vandalize his car, or (in this state) take his wallet? As this story was investigated during rush hour, it just got stranger and stranger. Let's see... Updyke, a guy who allegedly hates Auburn enough to poison trees in the city, passes by several chain-type, normal gas stations, and stops at the Tiger Express? He picks out the one decked out in orange and blue? His lawyer says that "it all went black," and he was attacked from behind. Yet, East Alabama Medical Center treated him for a cut above his right eye and one a scratch between the eyes. Captain Allan Elkins of the Opelika Police Department said of the injuries, "the extent of his injuries does not equate to an assault charge."

Despite injuries to the FRONT of his head, Updyke can't identify any attackers, there were no witnesses, Updyke is "not very cooperative" with the police, and his attorney reports the incident to... Paul Finebaum. Count me among the skeptics. Threatt says that the gas station attendant called the police,and that Updyke had returned to the gas station seeking video surveillance tapes. The attendant says that she never saw Updyke, nor called any police. Folks, if you're going to tell a lie, at least stick to facts that make sense. And keep your story straight. Meanwhile, the national press runs yet another tale that makes the denizens of Alabama look like lunatics.

Switching over to the negative Cam Newton story of the week, word is that Cam Newton cannot learn an NFL offense because he could not parrot an NFL-style snap call to Jon Gruden on TV. Clearly, national reporters have never been inside an SEC stadium. Your odds of any human voice being heard over the crowd noise even out to the offensive tackle is slim and none. In an offense like Auburn's, the snap is signaled by the quarterback's foot coming down. If they change the play, everyone looks to the sideline for the new call. But no, Cam gets no points for answering Gruden's request honestly.

The Newtons also continue to get heat because Cam never ceases to answer positively about his father Cecil when asked. Some point to that as a tacit admission of guilt by Cam. I don't follow that logic at all. There's only one explanation that makes sense to me, in the saga. When accusations started flying back last fall, it was clear that things would be slow to die down. Cam's eligibility was in real danger. I have no evidence for this, but I believe Cecil Newton "fell on his sword" and pled guilty. This got Cam off the hook with the NCAA. Cecil essentially put an end to the "this is what happened" speculation. Took one for his son. Think about it. If Cecil really went behind Cam's back and jeopardized a college and NFL career, would Cam be defending him to the cameras? Seriously, folks. In the fall of 2009, Cam Newton was an athlete with a history of trouble, and little SEC experience. The Auburn assistants had to beg head coach Gene Chizik to even offer Newton a scholarship, much less funnel him $180 grand!

In real news, Auburn has completed spring workouts, and we now have a slightly less hazy idea what sort of football team the Tigers have. After watching A-Day several times, my greatest concern remains with the defensive tackles. Coaches did a bit of bragging on how the line played, but the stats page reveals the same thing observers of the game saw. Starters Kenneth Carter and Jeffery Whitaker posted no stats. No tackles. No assists. No quarterback hurries. Nothing. Starting end Nosa Eguae moved inside to that spot for a number of snaps, he finished with one solo tackle and no assists. Even when the twos were on the field, backups Jamar Travis and Derrick Lykes combined for one solo tackle and two assists. I think it's time to scrap Auburn's "experiment" with putting four ends on the field at the same time.We have tried similar strategies before. In 2008, the Tuberville brain trust tried moving Michael Goggins inside on passing downs. I can recall a lot of 20-30 yard quarterback draws and scrambles that season. I could be wrong about all of this, of course. We may have just seen the beginnings of an All-American season by center Blake Burgess. He does look like a pretty good football player!

To a lesser extent, I'm worried about the wide receiver position. I hope those guys are catching balls every day between now and August. We did not see much of Emory Blake, as he's a proven commodity. I think beyond Blake, that flanker spot is wide open. I think Gus and Trooper have no fear about putting a freshman, a walk-on, or whoever will make plays out there. I'd hate to see a bunch of veteran seniors sitting on the bench next fall, but if A-Day is any indication, that may well happen.

All is not gloom and doom in the Auburn world. There were a lot of positives in Auburn's A-Day. The starting offensive line dominated. We have every reason to figure that the Malzhan offense will continue to crank out video game numbers. Barrett Trotter looked good throwing the ball, to me. Good accuracy, nice touch on the deep balls, and few bad reads. We've got proven runners, and I liked the work of H-backs/tight ends Phillip Lutzenkirchen, Chris Humphries and LaDarius Phillips.

I think we're set to have one of the faster and more physical secondaries in recent memory. Last fall, we began with a secondary with a lot of questions. You had Neiko Thorpe playing on an island. We had two safeties back there coming off serious injuries. The only guy who had a real chance of staying with big time receivers was Demond Washington. Now, we've literally got a two-deep of folks that can run. I'm excited about these guys. All they need is some experience.

War Eagle, folks. We've got a long way to go to reach fall camp. I'll try to keep my head out of the Auburn tabloid fodder, and start looking around the SEC. It's time to start sizing up our opposition. Is anyone else excited about a huge national championship logo that we'll see at midfield in Jordan Hare Stadium this fall? I am!