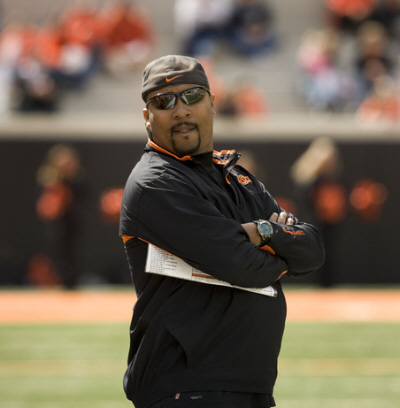 No one position has seen the turn around in fundamental play and execution as has the receiving corps.

Coached by Trooper Taylor, Auburn has become the mecca for great wide out play, and it only looks to get better.

You guys know the drill by now, we have already discussed the linebackers, defensive backs, running backs, offensive line, and the quarterbacks.

There are fourteen members of the 2011 Tiger squad, that are listed as wide receiver or tight end. Of those listed only four players have caught passes in a game, and Travante Stallworth has only two receptions, and they were back in 2009.

Graduation, and NFL defection hurt this area of the team as bad as anywhere on the roster. Add to that the members that have been ejected from the team, and depletion is a more accurate way to describe the situation. Although I would argue that all is not lost in the Loveliest Village of the Plains.

There is one DeAngelo Benton, that Coach Taylor has praised since his arrival to Auburn. At one time Taylor stated that Benton would rewrite the AU record books at his position. That prophecy has yet to materialize, yet, it holds high hopes that this will be the year Benton chooses to step up.

Travante Stallworth is another with explosive potential, but injuries have hindered his playing time while at Auburn. He is proclaiming to be healthy, and should contribute this season.

Here is the stat sheet from the official AU site on receiving for this years A-Day game.

Trovon Reed may be the most anticipated athlete coming out of spring practice this year at Auburn. After spending all last year at muscle beach, due to injury, "Sea Biscuit" as Coach Taylor has labeled him is finally going to get to the track.

With two solid receivers, and a highly touted tight end, coming into the fall two-a-days, Coach Trooper may have his toughest challenge to date. Getting three deep at every position will be a must in the Gus Malzahn powered offense.