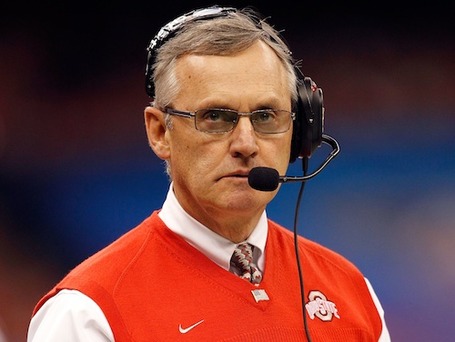 Have we seen the last of 'The Vest'?

Breaking news on Monday that the NCAA sent to Ohio State a 'notice of allegations' that head coach Jim Tressel lied to them about the eligibility of players in the now infamous tattoo-gate incident and committed unethical behavior by attempting to cover the incident up. This latest development is on the heels of Tressel's decision earlier this year to up his suspension from two games to five. Evidently, the NCAA has rebuked Tressel in the strongest of ways and elevated his conduct up to the major violations variety.

For you cynics that thought that this issue was too trivial to stick it to a big school like Ohio State, think again. And if you thought that a coach like Tressel with a (formerly) squeaky-clean reputation was Teflon-coated, then strike two. It hit the fan yesterday and the fallout is going to be bad. (t)OSU has 90 days from yesterday to respond before their hearing in front of the infractions committee in Indianapolis in August--right before the season begins. What timing and what a distraction, which is why something's gotta give before then.

If ever the NCAA was looking for a textbook case to lay the wood to a big-time program, unfortunately, Tressel and Ohio State walked right into this one. And don't get me wrong. It wasn't the coach's fault about the underlying violations, it's the failure to report them that's now at the fore-front. Tressel, seemingly once the poster child for what's right in coaching in FBS, now stands to be it's biggest sacrificial lamb for the NCAA to then lay down the law for any program even thinking of going astray. And it didn't have to go down like this.

I can't say what went through Jim Tressel's mind upon learning last April that five of his best players had received improper benefits. It doesn't sound like much--tattoos and such for football memorabilia. With all that a football coach has going on, perhaps this is pretty trivial, but in many scandals throughout history, it's the cover-up that's worse than the crime.

With major infractions now on the table for the Buckeyes, a new twist comes into play--repeat offender status, as OSU is still on probation for violations in basketball. That brings the stakes to all in. Having admitted to using ineligible players, the Bucks' 12 victories last season are probably gone--a looming threat all too real to Auburn fans the past few months.

In order to save itself, it might be time for Ohio State to cut ties with their coach of the past decade, who has compiled a record of 106-22, won 6 Big Ten titles and the 2002 national championship. Even Kirk Herbstreit went on the record yesterday, saying that it would be hard for Ohio State to move forward with Tressel at the helm.

With support for Tressel still strong among Buckeye fans, could the university to what they need to do and fire him? They've done it before, firing their greatest coaching legend Woody Hayes a day after he punched a Clemson linebacker after a game-ending interception during the 1978 Gator Bowl. Woody was their Shug Jordan or Bear Bryant. But that was 33 years ago. Have times changed that much in this win-at-any-cost world that he shouldn't resign?

Actually, Ohio State shouldn't be put in this situation. Tressel should do the honorable thing and unsheathe the seppuku sword. He should resign immediately, not only to save the character of the institution and the program, but his own as well. I expect it by week's end. He can't begin to rebuild his career and his reputation without first admitting he was wrong in the most drastic and irreversible of ways, and a resignation would be the clearest signal of such an admission.

Tressel is a good coach and will continue to have a great career, but no longer at Ohio State. I'm uncertain if he might get recirculated back into the Big Ten like a Saban or a Houston Nutt, but there are many schools that would take him after his scheduled come to Jesus session with the NCAA. I imagine even a few schools in the SEC would snap him up. I guess for Tressel it would boil down to the old adage, "if you can't beat 'em, join 'em...."

And before the rumor mill even gets a chance to start cranking up, there is no way that Urban Meyer would consider the soon-to-be opening in Columbus. You can file that under Urban Legends.