Auburn's Pass Rush Will Be In Good Hands With Mike

Share All sharing options for: Auburn's Pass Rush Will Be In Good Hands With Mike 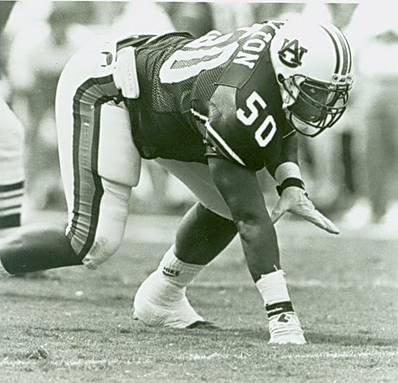 Mike was one of the all time great defensive tackles at Auburn.

Number 50 ran off the field for the last time at Jordan-Hare Stadium. It was November 12,1994 - Auburn had just missed a field goal that would have kept their 20 game winning streak alive. Legendary Bulldog announcer Larry Munson yelled over the air waves " Georgia has tied Auburn and rocked the conference ... Yes they broke the streak. 23-23!"

Little did he realize at that moment, that 17 years later he would return to the place were he had made All SEC. On September 3, 2011 former Auburn great Mike Pelton will be taking the field once again; this time as Defensive Line Coach for his beloved Auburn Tigers.

To finally be in this position, Mike said "has been a long time goal." His journey started when he was recruited by and played for legendary Auburn Coach Pat Dye. "It is certainly no surprise to me that he has developed into an outstanding football coach," Dye said recently. "Mike was the kind of individual who always worked hard ... he was always a team guy."

He left Auburn for a five year stint in the NFL and has spent a dozen years coaching at Valdosta State, Troy, Iowa State, and Vanderbilt.

Although he has had a lot of success in his career, some fans questioned whether he could be the right guy to follow Lombardi winner Tracy Rocker. Coach Dye said, "Auburn could not have picked a better (man) to take Tracy's place than Mike Pelton."

This is not the first time he has replaced Rocker on a coaching staff.

Rocker is one of his mentors, with Pelton having coached two years under him as a Troy graduate assistant. "We've kind of got some of the same philosophies in how we go about things, having both played for Coach Dye," Pelton remarked.

He took Rocker's place as D Line coach and went on to be Troy's Co Defensive Coordinator. In 2002, the Trojans ranked fourth nationally in total defense and were 16th in 2004.

He produced elite pass rushers as well as two of the greatest players in Troy Football history, in Demarcus Ware and Osi Umenyiora.  Ware is a five-time Pro Bowler and three-time All-Pro linebacker with the Dallas Cowboys. Umenyiora is a two-time Pro Bowl defensive end for the New York Giants.

While at Iowa State he coached a pair of All-Big 12 selections in defensive end Kurtis Taylor and nose guard Ahtyba Rubin who is a starter for the Cleveland Browns.

Pelton took the Auburn job knowing that it would be a tall order to rebuild the defensive line. The Tigers lost a Lombardi winner, four starters, and two key backups from last year's Championship Team.

As a player, Mike was a standout defensive tackle, earning first team All-SEC in 1994, a four-year letterman from 1991-94, was part of Terry's Tigers 1993 undefeated season, was co-captain as a senior, and helped the Tigers win a school-record 20 consecutive games from 1993-94.

If anyone knows how to coach defensive line, it ought to be Mike Pelton. He was the type of defensive tackle who was tough, tenacious, hard to block, and had a full speed motor. Attributes that fans can expect to see in his players this fall. In fact, it will not take long for everyone to realize that Auburn's pass rush ...

Will be in good hands with Mike.