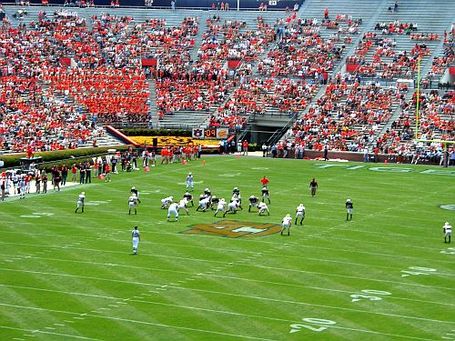 The Tigers are working hard.

War Eagle, everybody! It is hard to believe that we're already about half-way through spring football drills! The Tigers completed their ninth practice of the spring yesterday with a half scrimmage. There will be another full scrimmage Saturday, as players try to make moves and get better. Head Coach Gene Chizik continues to be upbeat about the attitude and effort level of practice, but details about the practices have been difficult to come by.

As has been the case the past few years at Auburn, attrition is the word. The news this week is that Tiger defenders Jessell Curry and Ryan Smith are still technically on the team, but haven't been practicing due to "personal issues." Their status will be ultimately decided by Gene Chizik. Rumor is that Curry is looking to transfer. An already thin running back department was hit yesterday with the news that Anthony Morgan left the practice on crutches, and will undergo an MRI on his knee. The way things are going, we may be hunting for volunteers from the student section to run the ball on A-Day.

As Aubtigerman pointed out yesterday, great progress is being made on a green defensive line. Just months off of a freshman All-SEC season, Nosa Eguae is the leader on the unit. As I suspected would happen, Corey Lemonier is running first-team on the other side. Even undersized last season, he was too obviously talented to keep out of the lineup. Dee Ford will see a lot of playing time at end, likely as a pass-rush specialist. With a good summer conditioning program, I'd guess that Lemonier is the most likely player to explode onto the SEC scene like Fairley did a year ago. Don't rule out Craig Sanders playing a lot behind Eguae. He's just as much of a head-hunter on the line as he was on special teams last season. Young sophomores Kenneth Carter and Jeffery Whitaker are leading the way at tackle, with solid depth provided by veterans Jamar Travis and Derrick Lykes.

Holding steady as linebacker starters are Jake Holland in the middle, with Jonathan Evans and Darren Bates outside. As has been the case in the past, Eltoro Freeman is the most physically talented guy out there, but coaches want him to show more consistency. The worry with this group is tackling. These guys are still struggling with being in the right position, and have had a tendency to give up big plays, thus far. Yesterday, Darren Bates did a few reps at middle linebacker. That tells me that Ted Roof is still searching for a backup to Holland.

As might be expected in the secondary, new starting corners T'Sharvan Bell and Chris Davis have their hands full with a speedy Auburn receiving corps. The good news is that true freshman/early enrollee Jonathan Rose is an amazing talent at that position, and will likely help us against the larger receivers in the league. A lot of Auburn's problems giving up big plays in early scrimmages is due to not lining up correctly. Safety Neiko Thorpe is still learning the various packages, as is true sophomore Demetruce McNeal. This is a work in progress. The good news is that Thorpe is making a good transition. Always a physical corner, he should be a lot better breaking down on a play, rather than trying to avoid getting beaten deep.

Special teams news has been mixed. The most obvious weakness the past two seasons has been at punt returner. Quindarius Carr continues to work there, along with several others. I think the coaches would prefer to go with Carr, who does have some experience. They are really working on doing a better job getting under the ball. For all the worries over muffed punts, Auburn was hurt just as badly by letting punts hit and roll in 2010. We gave up a lot of field position yards. We were hoping for more distance on our punts in 2011, but thus far that has not been the case this spring. Cody Parkey has been solid, if unspectacular place kicking. The team is trying to break in some new holders, and results there have been inconsistent, at best. Parkey has been mostly making those "pressure kicks," at the end of practice.

Many folks over the past winter have pointed to Auburn's losses on the offensive line as the 2011 team's greatest obstacle to overcome, but I don't see it. A. J. Green is not completely 100 percent after the injury last season, but he's still doing OK. Brandon Mosley looks really good at the left tackle slot. We're also getting good play from veteran guards John Sullen and Jared Cooper. I think we'll be OK at center, whether Blake Burgess or Reese Dismukes starts. There are several ready-to-play linemen coming in this fall, too. If there's any unit this spring that has a little depth, it's on the line. Coach Grimes has a few bodies to work with, and he's really putting them through it!

No unit at Auburn lost as many players in the offseason as the receiving corps. At tight end, all we have behind Phillip Lutzenkirchen is walk-ons Cameron Groce and Chris Otersen. This fall we'll likely be using true freshman Brandon Fulse as the top backup there. On the outside, Emory Blake has taken over Darvin Adams' split end spot. Quindarius Carr is running at the top spot at flanker, where Terrell Zachary played. Carr has never really had any speed issues, but he's working to improve his blocking and short-route running. DeAngelo Benton is poised to back up both sides, and work out of the slot when necessary. Trovon Reed has had a bunch of explosive plays from the slot, and Travante Stallworth has had his moments, too. The real challenge in the receiver corps will be to keep these guys healthy. There won't be much depth.

As with the receivers, Auburn is thin in the running back corps. At H-back, it's apparently redshirt freshman LaDarius Phillips' job to lose. His backup is senior walk-on Chris Humphries. Outside of walkons, the tailback rotation of Michael Dyer and Onterio McCalebb appears to be intact from last season. Neither has had much in the way of contact this spring, as the coaches can't afford to lose either. Unlike last spring, McCalebb may be even faster than he was last season. There is help on the way this fall for this unit, when Tre Mason, C. J. Uzomah, and Quan Bray arrive.

One of the big surprises this spring has been the play of quarterback Clint Moseley. Expected to back up veteran Barrett Trotter, Moseley has made it a race. Particularly in the early scrimmage, Moseley threw better, and was less prone to turnovers. From all appearances, Moseley has a slightly stronger arm, although Trotter is a decidedly better runner. Frankly, I don't think it's a bad thing at all to come out of spring drills with two capable guys ready to lead this team.

Looking over the spring roster, it is not a big crowd out there at practice. There are around 50 scholarship players, and maybe 20-25 walk-ons practicing. There's the usual half-dozen guys held out, riding bikes and the like due to injury. The main thing this spring is for these guys to keep learning and developing. I'm encouraged by Coach Chizik's take on the attitude, because I know we have some of the best teachers in the game working with these players. Above all else, stay healthy! I'd figure at this point, expect an A-Day game featuring offense vs. defense. Much like the last two years, the 2011 team is shaping up to be one that struggles to prevent big plays, but one that is explosive on offense. War Eagle!