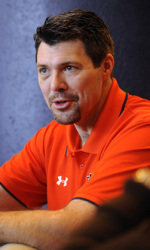 Hello once again and War Eagle everybody!

WE have already looked at the defensive backs, linebackers and running backs in this series, so let's dive in and see what's brewing on the 2011 Tiger "O" line.

Coach Jeff Grimes spurned a move closer to home and working with Mack Brown, to stay here at Auburn with Coach Chizik. That non-move put an end to the AU to UT coaching carousel, I hope, for good! It's also evident that Grimes likes Auburn, and living in Auburn.

There are now 21 designated Offensive linemen on the AU roster, with two more coming in this fall. Obviously not all of them will make the field this season, although it's good to know the numbers are there to develop some great depth. Injuries are a big part of playing offensive line as exampled last season, and that depth sure came in handy.

Auburn's incoming recruits aside, the Tigers will have 3 true freshmen, 8 red-shirt freshmen, 2 sophomores, 3 juniors, and 5 seniors. The 2 recruits that will show up for fall practice are highly rated, and will be expected to come in and work for playing time.

In comparison, we have a tale of two seasons when it comes to the offensive line. Last season the Tigers strength was a senior laden heavily experienced group that worked as well as any in all of college ball. This season the experience is lacking, and senior leadership will be sorely missed. Fear not Tiger fans, there is a silver lining to this dark cloud.

What is lacked in experience and age, is more than made up in talent. Coach Gene Chizik and his staff have gone out and recruited some of the best linemen available. With the return of Aubrey Phillips, and Shon Coleman's return looming, it is safe to say that there hasn't been this much offensive line talent, at one time on the Plains, since Pat Dye walked the sidelines as coach.

I do believe that this will once again be a strength for the Tigers as the season approaches. Competition breeds success, and there is plenty of competition for the rotation up front. I'll just guess what the starting lineup and second teams will look like, although it is a long, long way to the start of football season.

Back up - Tackles - John Sullen, Jared Cooper, and Aubrey Phillips

Back up - Guards - Ed Christian, and Tunde Fariyike

Back up - Center - Reese Dismukes