Share All sharing options for: Aggies visit Auburn for the Season Opener! 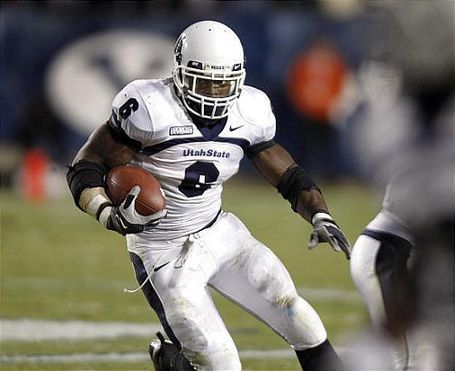 War Eagle, everybody! It's time now for a preview of Auburn's 2011 football opener, the Utah State Aggies. They'll visit Jordan Hare Stadium on September 3rd. The game will be the season-opener for both teams. Both teams will display a lot of new faces in September. Auburn replaces 36 scholarship players from last season's BCS Champion team. Utah State will start a new quarterback, and will have a re-vamped defense with three new starters in the secondary.

While last year's Aggie team was a disappointment, finishing 4-8 (2-6 in the WAC), it had its moments. The Aggies opened in Norman, Oklahoma against the mighty Sooners. Utah State battled hard, and lost by only a touchdown. The teams were nearly equal in total yardage, around 420 each. Injuries decimated Utah State from that point on, but the team still posted a quality win over Brigham Young, 31-15, while the Cougars were flying high in the polls. It's a turbulent time in Utah, with conference realignment ongoing, and teams in Utah making changes. BYU has become an independent, and Utah has joined the PAC-12. Some wonder if the WAC will survive the changes.

Head coach Gary Andersen is in his third season with Utah State. While results on the field haven't been spectacular, Andersen has brought in a pair of highly regarded recruiting classes, and the Aggies have some talented young players on their roster. Dissatisfied with how last season went, Anderson did some shuffling of his coaching staff during the offseason. Offensive coordinator Dave Baldwin was moved from quarterbacks to tight ends, Alex Gerke was let go from the offensive line, and T. J. Woods was moved from tight ends to offensive line coach. Andersen hired Matt Wells away from New Mexico to coach quarterbacks.

Although the offense has to replace starting quarterback Diondre Borel, there are some weapons available. 1000-yard rusher Robert Turbin, a junior, returns after missing a year with a knee injury suffered in preseason practice. Also coming off the injury list is speedy junior wide receiver Stanley Morrison, a deep threat. The Aggies return 4 starters on the offensive line.

The Aggie defense the past two seasons has revolved around the talents of star linebacker Bobby Wagner, who posted 133 tackles in 2010. The Aggies must replace two defensive tackles, and most of the secondary. If the spring game is any indication, Utah State has a way to go on defense. There were some offensive fireworks in that game. Last season Utah State gave up 5146 total yards, including 4.9 yards per rush and 7.3 yards per pass. Head coach Gary Andersen has admitted that the team needs more of a presence up front to succeed defensively.

On special teams, the Aggies must find a new kicker and punter. With the departure of Peter Caldwell, the Aggies lose a 41.7 yard punting average and a kicker who hit 10 of 15 field goal attempts. One bright spot on Aggie special teams is junior return man Kerwynn Williams, who racked up 1444 kick return yards at a 27.2 yard per return clip.

Auburn defensive line vs. Utah State offensive line: Auburn has a worrisome situation going into this game. Projected tackle starters Kenneth Carter and Jeffery Whitacker, both true sophomores, have only limited experience in 2010. The Aggies return all three interior line starters: senior guards Funaki Asisi and Phillip Gapelu, and sophomore center Tyler Larsen. Auburn does have a trio of flashy defensive ends, and may cause trouble on the edges for the Aggies. Sophomores Nosa Eguae, Dee Ford and Corey Lemonier have speed to burn. Advantage: Even.

Auburn linebackers vs. Utah State runners: While Auburn's linebacker corps is young, it has talent and depth. The coaches are high on sophomore middle linebacker Jake Holland, who has moved into the signal calling role. Darren Bates, Jonathan Evans and Eltoro Freeman are experienced. They'll be trying to chase down star Utah State running back Robert Turbin, who missed all of 2010 with a knee injury. Advantage: Auburn.

Auburn corners vs. Utah State outside receivers: Auburn will be young at corner, but this new group looks fast and confident. T'Sharvan Bell and Chris Davis played a good bit last season, and made plays. The leading returning Aggie receiver, junior Dontel Watkins, has been moved to safety. The Aggies aren't without options, though. Junior Stanley Morrison is a playmaker, and senior Eric Moats is experienced. Senior Xavier Martin had 145 yards on 11 catches in the spring game. Given Utah State's usual spread attack, I'd expect to see Auburn run a fair amount of nickel and dime defense. Reserve corners Jonathan Mincy and Jonathan Rose looked good this spring. Advantage: Even.

Auburn safeties vs. Utah State secondary receivers and quarterback: Auburn's very green at safety,with senior Neiko Thorpe moving over from corner, and true sophomore Demetruce McNeal taking over at the other slot. Both guys have speed, and are hitters. By all accounts, the new guys did well this past spring. Utah State will use a host of characters in the slot. The most prolific returnee would be junior Kerwynn Williams, who worked some at that spot last season, before moving to running back full-time. Utah State had several quarterback candidates this past spring, and still haven't named a starter. Coming out of spring, it looks like junior Adam Kennedy is ahead in the race. Advantage: Auburn.

Punting: Auburn will field sophomore Steven Clark at punter. Clark was shaky last season in a few starts, but had a big spring game, averaging 47 yards per punt. Utah State has signed Junior College All-American Tyler Bennett as a punter. Bennett averaged 43.7 yards per punt last season. Bennett may have some nerves in his first start, while Clark has punted in Jordan Hare in front of a screaming crowd. Both teams were decent in coverage, awful on returns last season, and kept live returns under wraps this spring. Advantage: Auburn.

Kickoffs: Sophomore Cody Parkey handled about a third of Auburn's kickoffs last fall, and averaged 63.2 yards. Tiger coverage was downright nasty, holding opponents to 19.7 yards per return. It remains to be seen who will start for the Aggies at kicker. Arkansas State gave up only 20.8 yards per return. Advantage: Auburn.

Auburn offensive line vs. Utah State defensive line: Auburn will replace four starters on the offensive line this fall, but the new starters have experience, and looked good in Auburn's A-Day game. Tackles A. J. Green and Brandon Mosley could both be all-SEC candidates. The interior line with veteran junior John Sullen should be solid. Arkansas State will start a very green group at defensive tackle. Senior ends Quinn Garner and Levi Koskan combined for 7 sacks and 84 total tackles last fall. Advantage: Auburn.

Auburn backs vs. Utah State linebackers: Auburn returns the dynamic duo of Michael Dyer and Onterrio McCalebb, a dangerous "thunder and lightning" combo. The Aggies return all three starters from a year ago, but it's a group that gave up 4.9 yards per rush. Senior Bobby Wagner was all-WAC last fall, and he's the leader. The Aggie staff is hoping for big things from junior-college transfer Bojay Filimoeatu, who was a JUCO All-American last fall. Advantage: Auburn.

Auburn secondary receivers and QB vs. Utah State safeties: Auburn's most notable secondary receiver is tight end/h-back Phillip Lutzenkirchen, who was a clutch go-to guy last year. About half of his catches resulted in touchdowns. Auburn is still in the midst of a quarterback race, but junior Barrett Trotter seems to have the upper hand at this point. Regardless of whether Trotter or sophomore Clint Moseley start, Auburn will field a quarterback with three year's worth of experience practicing the Gus Malzhan offensive system. Utah State returns senior strong safety Walter McClenton, who had 62 tackles a year ago. The Aggies will have a new starter on the other side. Advantage: Auburn.

Auburn should win this matchup convincingly, but must be wary of mistakes. Utah State's best hope is to be able to run the ball. If they are forced to become one-dimensional, the Auburn pass rush will be a big factor. Defensively, it's a lot to ask to slow down the Malzhan offense in the season opener. Auburn appears to have advantages in the special teams area also.

Prediction: Auburn looks much more polished than anyone figured. Utah State has great difficulty on both sides of the ball. Auburn cruises in this one, 43-13.