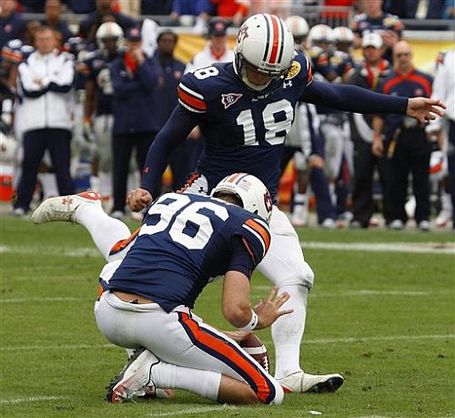 The most difficult aspect of college football to predict and cover in preseason is the game changing, and often times game saving play, of the "SPECIAL TEAMS".

Auburn's special team coach is Jay Boulware, although each and every position coach has a role in the development of these positions. Coach Chizik takes a very prominent role in the practice sessions of these various teams. Often the players on the special teams are comprised of some starters mixed with the non-starter personnel.

Last year while Wes Byrum was preparing to kick the game winner in the BCS National Championship game, I couldn't help but be excited to see John Sullen in there on the left side of the line. Tremendous experience for him, and for his future at AU.

The same statement can be made about many of the players we will depend on this coming season. We all remember what a great season Craig Sanders had, along with Demetruce McNeal. Making special team tackles on kick returns, and punt returns.

With new faces and legs at each of the kicking positions, there is anticipation, the nervous kind, for what the future holds. Brought about even more so because of the absence of Cody Parkey, Auburn's place kicker, from the spring game.

Still, we are now into the third year of the Chizik/Boulware system of special teams play, and the players know what to expect, and what is expected of them. Still the incoming class will add some much needed relief, in the form of participation on these vitally important phases of the game. Look for several true freshmen to be asked to fill roles in each of these.

It's not like Auburn's special team stats have set the college football world on fire either.

It's true that in PAT's Auburn was very successful with a 98.7% average which was second best percentage in the country, while 33 teams had a 100% average. In the field goal department, the Tigers lacked the percentage grades one would hope for. Finishing ranked 52nd in the country with an average of 77.3% of FG's attempted. The fact that Auburn's kicking was not highly ranked, pales in comparison to the clutch performances of Wes Byrum and his team mates when the game was on the line.

Kick off, and the returns of opponents kick offs found AU ranked in the top 25 nationally, so there was not a major concern there.

Where the concern comes from is the lack of disciplined play from the punt return team. Raked 89th in the country last season, Auburn's PR team averaged just 6.8 yards per return.

The most under achieved phase of Auburn's special teams.

For many years with the "HALO" rule, catching a punt was taken for granted. All that changed two years ago at Auburn, and to this point, has yet to be successfully rectified.

Call it a mindset, or an "Achilles Heel", I really don't care what you call it, there needs to be a vast improvement in this area of special teams play, like yesterday!

****all stats and rankings provided by cfbstats.com