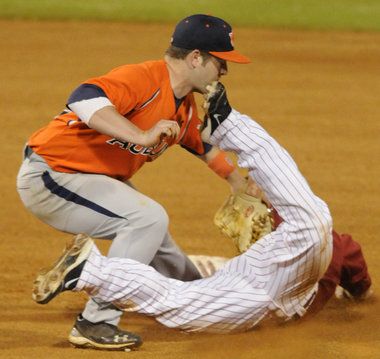 Auburn faces their biggest rival this weekend in the final home stand of the year. Anytime Auburn and Alabama get together it's a big deal but this three day series is of particular importance.

Both teams are vying for the Western Division Championship and the two are separated by only one game in the standings with just six conference games remaining.

Auburn has a 26-23, 11-13 SEC record and Alabama is 30-20 overall and 12-12 in the SEC, tied with Arkansas for first place. Auburn will have to catch both teams to repeat as Western Division Champs. The good news is that the Tigers hold the tie breaker over Arkansas having taken two of three from the Hogs earlier in the season.

Auburn also defeated the Tide this year in the Capital City Classic but that game is not counted in the Conference standings.

Nonetheless, if Auburn can take care of business this weekend, they will have an excellent chance to be only the second Auburn Baseball Team in history to repeat as Division Champs. The last time that feat was accomplished was in 1964 - 65.

It is also possible that the Tigers could qualify for the SEC Tournament depending on Auburn's performance and the outcome of games involving Tennessee, LSU, Ole Miss, and Mississippi State.

Friday night's game at Plainsman Park was rained out so there will be a doubleheader Saturday with the first game beginning at noon. The second game will follow about 45 minutes after the first game is over.  Sunday's contest starts at 1 p.m.

The Saturday games will be broadcast live on CSS and ESPN3.com. And the starting Tiger pitchers will be Junior Jon Luke Jacobs and ' the Ace,' Junior Derek Varnadore.   Let's Go Tigers - Beat Bama!

Auburn Freshman Dillon Ortman earned the win in the Tigers opening series against Alabama Saturday (7-5) and then picked up the save in the second game (8-7 ).  Ortman got the final three outs after entering in the ninth inning following a Jared Reaves home run that had cut the Auburn lead to one run.

It was a typical tough Auburn / Bama  fight. Coach John Pawlowski said, "I am really proud of our team today. We competed for 18 innings. It was a long day and it was pretty intense."

The doubleheader sweep against Alabama now gives the Tigers the tie-breaker over four of the SEC Western Division teams. Auburn will be going for the complete series sweep at 1 p.m. Sunday at Plainsman Park.

Auburn came within one run of taking over first place in the SEC Western Division race Sunday at Hitchcock Field. The Tigers rallied in the ninth but loss 7-6. Now Auburn sits at 28-24 and in a four way tie for first place with Alabama, Arkansas and Mississippi State. Each team has one series left to play. Auburn will play their final against Tennessee next Thursday through Sunday in Knoxville.