Sweet Memories Are All We Have

Share All sharing options for: Sweet Memories Are All We Have 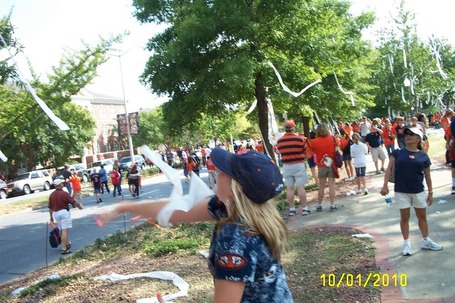 It's just a terrible time of year, when it comes to football being played and talked about. The season has truly ended, and we are in the "DEAD ZONE" in relation to the length of time it will take to start up two-a-days. Seems like all we have, are the memories....

Like the anticipation of seeing Zac Etheridge returning to Jordan-Hare stadium. Zac told us it felt like he was "a freshman again, I was so nervous". After his neck injury against Ol' Miss in 2009, he was left with   only one option that would allow his return to football, if it healed the proper way. It did, he did, and the  rest, well, you know.

Watching in amazement, this new quarterback, that could run like an antelope, and throw like Pat Sullivan This same quarterback would end up going 21 for 21 in pass attempts, on the very first drive of each one of Auburn's games, all the way through the SEC championship game. Cameron Newton, the human highlight reel, became an Auburn legend in just one season.

Speaking of legends, Bo Jackson had his long standing rookie rushing record broken by this little dynamo from Little Rock, AR. Mike Dyer, has taken his rightful place in Auburn lore, and his future is filled with the potential to keep Auburn in the hunt for championships during his stay here. Remembering a limping Mike dyer score up the gut with a great read on a block, and against his  home state college, in front of his newly embraced family. His smile afterward was comparable to a little kid getting that Christmas present he so badly wanted.

I remember Kodi Burns  as he described that smile on Cam's face as Newton lined up wide right, and ended up in man to man coverage against a 5'10"  Ol' Miss defender. The former quarterback, turned receiver, Kodi made a perfect throw, put where only Cam could catch it. He did. TOUCHDOWN AUBURN!

I remember our entire offensive line getting called out, publicly, because they had let a Clemson squad push them around, way too much. They responded, boy did they respond. From that point on, it was arguably the best offensive line play in America. In the SEC Championship game, the Conference sack leader was South Carolina. The Gamecocks came out of that game with ZERO sacks.

I remember the talk all week of Ol' Miss being just the team to "upset" Auburn. Their crafty coach would have a little something in store for our beloved Tigers. The rebels even incorporated the use of Spielberg sensation "Star Wars" along with uniform changes. All the tricks would amount to was an exhibition, of how not to. Throw a deep corner route at Demond Washington once, fine, try it again, and you get an interception in your face. Then when you do finally score, you kick the ball directly to him? Paid for that mistake too! A 94 yard stroll through the park later, TOUCHDOWN AUBURN!

I remember as Quentin Riggins,"Q" as he is lovingly called, talked on the sideline with 7:31 left, Riggins is the sideline reporter for the Auburn radio team. Auburn had the ball and was over 90 yards away from the end zone, on the road, in the Kentucky game, and "Q" stated that championship teams make these drives, and score. They did, as time was running out, Wes Byrum did what he has become famous for. Kicked the ball through the uprights to win the game. Again.

I remember us talking about the quickness of Onterio McCaleb. Of how he could grab a squirrel by the tail, while he  chased it. Although slight in stature by SEC standards, McCaleb has the heart of a much bigger man, and speed to spare. Just ask Patrick Peterson, who had the angle on McCaleb, in the LSU game, and still couldn't catch him. 70 yards untouched, and TOUCHDOWN AUBURN!

One of my personal favorite memories, was hearing Josh Bynes' statement during the BCSNC post game presser. He flatly stated "I told our guys on defense, that this week, all the sports shows on TV have shown are offensive highlights! Not one highlight was about our defense, so, we've got to step up our game". They did. Holding one of the most prolific scoring offenses to just 8 points for the final three quarters. An offense, that mind you, averaged a score every 1 minute and 49 seconds of possession through the 2010 season.

Sadly, I remember Toomers Corner. Thankful that I was able to share an Auburn tradition with my niece before it was too late. Simple words can not describe the pain, and heartbreak felt for all the Auburn faithful still to come, who may never be able to share that experience.

There are many more memories of the championship season, I could go on and on. This thought crossed my mind however, why don't you, our beloved Track Em Tigers readers, take the time to share a few  of yours, with us. I truly look forward to your posts.