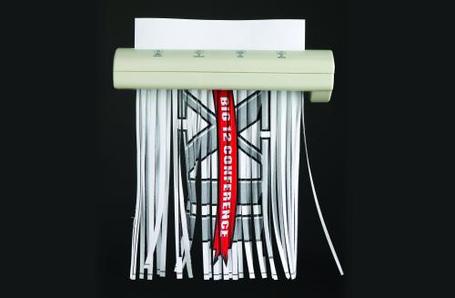 I still love this picture and have been waiting to reuse it for soooo long now.

To Hell With Math: The Big 12 Staying the Big 12 Despite Being a Safety Down

During the nationwide game of Musical Conferences in the spring of 2010, the Big 12 turned out to be the biggest loser, all in part to the whoring antics of the University of Texas, or Texas University as Texas A&M oft calls them (and don't forget to call the Aggies aTm, like their helmets read. Ahh, this is rich)

When the Big 10, another mathematically challenged conference itself, decided to put feelers out to draft up to three additional teams, the Big 12 became the first BCS conference not named the Big East to have teams poached away from it, losing Nebraska to the Big 10(11)(12) and Colorado to the PAC 10(11)(12). And the conference won the 2000 and 2005 MNCs. Who wouldn't want to be a part of that, other than Missouri, who tried to invite themselves to the Big 10, but needed a dance partner the likes of Texas or Notre Dame to have a snowball's chance. Get back in line, Mizzu!

Texas held itself out to the highest bidder from both the Big 10 and the PAC, and might have strayed away from the herd had Colt McCoy not gotten hurt during the 1st quarter of the negotiations. Nah, they weren't ever going anywhere. They just wanted to further cement their place as the big dog of the conference and have more of that TV revenue flowing back into Austin. And they probably now have veto power over what expansion teams are tendered offers in the near future, hence keeping the Big 12 name intact instead of reorganizing a new conference around the number TEN, (keeping in mind that the BIG 10 is already taken, damn!)

So with making all the mess with Texas, here's a few names I think the Big 12 should consider as being more appropriate nomenclature for the conference:

From the Cleveland Plain Dealer, the coolest newspaper name in all of the country if there ever was one, came news that the Greater Cleveland Sports Commission was working up a proposal to be a possible host for the aforementioned Big 10 championship game when about two months ago, the NCAA told them not to even bother. Oooh, SNAP.

Chicago and Indianapolis make their presentations this week, but my money is on Indy, being they have a domed stadium and the hometown NCAA gods to appease. Besides, Soldier Field II is just as cold in December as the original Soldier Field, and Wrigley Field saw it's last football ever again last fall with Illinois and Northwestern.

Cleveland will just have to suffice with the Rock and Roll Hall of Fame and the Browns. Just maybe if they could have managed to hold onto Lebron. Would Atlanta be too far?

In the boldest prognostication for a neophyte head coach since Kiffykins predicting "singing Rocky Top all night long" at the Swamp in his inaugural (and thankfully, only)  year, first year Florida coach Will Muschamp promised a female fan a victory over Georgia at the annual meeting of the Atlanta Gator Club. It seems the former Gator coed had a wedding scheduled on the day of this year's WLOCP to a Georgia fan of all people and dates.

Funny how nobody chastised the silly girl for such ignorant timing. A similar faux pas in the state of Alabama would incur a decade of shunning for sure. (Here's a great gift idea for all the groomsmen--pocket radios with ear buds) But Muschamp took the bait, and although it's nowhere as bad as Kiffin's gaff, quotes have probably already been plastered in Georgia's locker room. A retaliatory team end zone celebration is almost assuredly in the making.

Muschamp, a Georgia grad who grew up in Gainesville, has been receiving some flack from Dawg fans over his loyalty since taking the Florida job, an issue he addressed later:

"I'm loyal to who signs my checks," Muschamp said. "All of that other stuff, I don't get into. In our profession you're loyal to the people you work for. I'll do the best job I can for the Gator nation."

That's almost to a letter what I heard from Vince Dooley's mouth during a brief chance meeting in a restaurant last week when I finally got to ask the man a question I always wanted to ask him.

It is a profession, after all.