Is So Close the Same As So Far Away?

Share All sharing options for: Is So Close the Same As So Far Away? 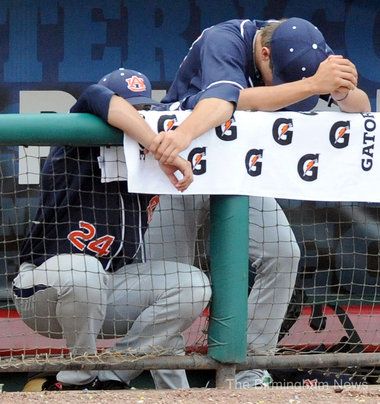 Isn't there a game where you get points for coming close? Oh yeah it's called horseshoes. Too bad that doesn't apply in baseball. For the Auburn Tigers have been close all year, having lost eight one run games during the regular season they came up one run short (3-2) again today in an SEC Tournament loss to Georgia.

The loss hurts on several levels. First what Tiger doesn't feel particular pain to lose any game to our oldest rival. Second it is a reminder that this team came within one run and one game of repeating as Western Division Champs. And finally the loss ended the Tigers dream of qualifying for a second consecutive NCAA Tournament.

Before the NCAA implemented the .500 + 1 rule Auburn would probably be in the NCAA since the Tigers have one of the strongest RPI's in the nation. There will probably be teams that are not as strong from weaker conferences that make the big dance. Nevertheless, it is what it is and Auburn goes home.

One has to wonder how much the toned down bats affected the Tigers this year. There didn't seem to be much late inning heroics as has been evident in previous SEC years. One thing is for certain, Auburn was plagued by untimely hitting all year.

And that was the case Thursday evening. While Tony Caldwell went 2-for-4 with an RBI and Casey McElroy hit a solo homerun in the fourth, Auburn also had runners on first and third in the same inning with no outs and couldn’t get them in.

There is a lot of disappointment tonight on the Plains. But there is still room for optimism. Sure the Tigers coulda and maybe shoulda done better. But I submit they had a good year after all.

Consider that last year just when it appeared that John Pawlowski's group had brought Auburn Baseball back to glory, having it's best season in 15 years, MLB swept down and snatched up 12 from the SEC West Division Champs and five of their recruits.

That total ties an SEC record as well as tying UCLA for the most players drafted from one team last year. All together, the five recruits put the total Auburn players/recruits that were drafted by MLB teams at seventeen.

With most of those players leaving for the lights, many questioned whether Pawlowski would be able to get Auburn back to the SEC Tournament in 2011. The general feeling was if he did that, it would be an even greater feat than having won the West in 2010.

Well in our disappointment we need to remember that goal was accomplished this year. The Tigers did come close - and I believe because of it ... winning the conference is not so far away.