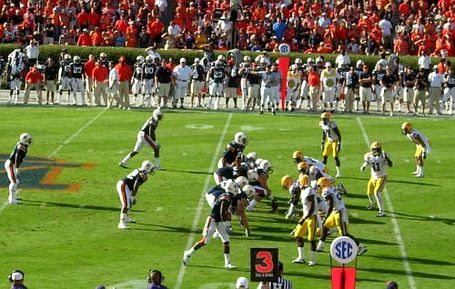 How will the Tigers match up in the trenches with the best teams?

War Eagle, everybody! It's that time of year when the football magazines start hitting the store shelves! With that in mind, we'll take a look today at the 2011 Auburn Tigers. On this crisp, starlit morning, it feels more like a fall football Saturday than a spring day. Kick back with a warm mug of coffee,and we'll tell you what we think will transpire this fall!

Defensively, I think it's important to look back and see what happened in the third year of Gene Chizik's previous tenure as Auburn's defensive coordinator. When Chizik first arrived, our starting glimpse of his team was in the Coliseum in Los Angeles. I don't think I've ever seen as clueless an Auburn defense trying to figure out Southern Cal's bunch sets. By year's end, Chizik's troops were holding Bama to 7, and Penn State to only 3 field goals. There was improvement in 2003, as Auburn's scoring defense went from 17.7 points per game to 16.3. Going into 2004, there were a LOT of questions. The Tigers had lost Demarco McNeil, Spencer Johnson and Reggie Torbor up front. Carlos Dansby and Dontarious Thomas from the linebacking corps and Roderick Hood from the secondary had left for the NFL. The front seven looked really shaky. You had career backup end Jay Ratliff starting in the middle. The oft-injured Antarrious Williams was going to start at one outside linebacker spot, and Kevin Sears, a sophomore with no experience was going to start on the other side. All the 2004 defense did was hold opponents to 11.3 points per game and go 13-0.

Similarly, there are big questions with the 2011 defense, but Auburn has a lot of talented guys ready to step up. Ted Roof and company have had the defensive scheme in place for three springs now, and the players know how it works. From the second half of the Iron Bowl on last year, we saw a very confident bunch on the defensive side of the ball. The Tigers should be even more talented and deep this season.

There's every reason to hope for improvement in special teams in 2011. Coordinator Jay Boulware did a fantastic job last season of taking a highly regarded incoming freshman class, and turning them into one of the best coverage units in the SEC. There's another similarly talented class coming in this fall. Look for the Tigers to be nasty on the coverage teams. I don't think any of us will forget Wes Byrum any time soon, but I think Cody Parkey has looked solid in his appearances to date, and he had a good spring. I certainly enjoyed watching punter Steven Clark hit some booming punts on A-Day. The Tigers need only to shore up the punt return game to have one of the best special teams units in the SEC. Surely, we can find someone to put back there who can hold onto the ball?

After only one offensive touchdown on A-Day, a lot of folks are worried about the Auburn offense in 2011. I think it's important to note that despite breaking in a different quarterback every year, Gus Malzhan has not fielded a bad offense in his previous five seasons as a college coordinator. I think we'll be solid on the offensive line, we have talent in the receiving corps and backfield, and we'll get it rolling again.

Position by position breakdown, after the jump!

The biggest concern for the Tiger defense coming out of A-Day is the tackle position. Young starters Kenneth Carter and Jeffery Whitaker did not play much, and recorded no stats. A variety of young guys got pushed around. There's talk of one or more of the defensive ends moving inside to help bolster the unit. Speculation is that it might be Craig Sanders making that move. I have to think Sanders is too valuable as Nosa Eguae's backup on the strong side end spot. Justin Delaine has also been mentioned, but he's only listed at 236 pounds. Not a single end is listed at more than 257 pounds. None of those guys is big enough, right now, to be effective run-stuffers in the SEC. Meanwhile, look at the weights of the incoming freshman class: Brian Walsh at 307, Angelo Blackson at 295, Jabrian Niles at 260, Devaunte Sigler at 255, and Gabe Wright at 310. I think the youngsters will have to fill out the depth chart. As to the starters, remember that we were not sold on T. J. Jackson and Jay Ratliff in the preseason of 2004, and they turned out well.

I think Auburn will do well at the defensive end position. It's a deep unit, with experienced guys Nosa Eguae, Dee Ford and Corey Lemonier all poised to have breakout years. Craig Sanders and Joel Bonomolo should add quality depth.

At linebacker, I'm expecting big things from Eltoro Freeman. He was listed as the backup middle linebacker this spring, but I have to think he'll get a starting job somewhere this fall. Unlike previous springs, Freeman zeroed in on quarterbacks and ball carriers this year. He racked up 4 tackles and a sack in limited minutes on A-Day. My guess is that Freeman worked at middle linebacker to learn how to run the defense. He would be the guy, if anything happens to starter Jake Holland. I can also see Freeman and Darren Bates used situationally on the strong side. You might see more of Freeman against the run-oriented teams, and former secondary starter Bates on passing situations. Bates is about 25 pounds lighter than Freeman. Redshirt freshman LaDarius Owens will play a lot, too. He's big, and fast.

We're cautiously optimistic about the Auburn situation at cornerback. T'Sharvan Bell and Chris Davis got their feet wet as backups last season, and will likely start in 2011. Bell made some big plays down the stretch. Neither guy can stay comfortable, because reserves Jonathan Rose and Jonathan Mincy looked good this past spring also. I think you'll see more of Auburn rotating corners this fall. That was done in 2010 to keep the starters from getting worn down against big SEC receivers, and the Tigers should have more able bodies this fall.

The safety position has the potential to be the most solid situation we've had in years. We've got a couple of speedy, athletic players penciled in to start, this season, rather than a list of possible suspects coming off injured reserve. Neiko Thorpe and Demetruce McNeil will give us a lot more speed than we're used to from the safety position. On Gene Chizik's best defenses, he's been able to successfully move cornerbacks to safety.

The punt returner situation remains the biggest question on special teams. I'm not sure either Quindarius Carr or Trovon Reed is the answer. Carr put two more balls on the ground during A-Day. Reed is potentially a big star on the receiving corps. Do we really want to risk him returning punts with no halo rule? I'm not sure what the answer is here. Reed certainly looked more sure-handed during A-Day.

I was very encouraged about what I saw from the offensive line on A-Day. A. J. Green looked like he used much of his rehab time since last year's Clemson game studying proper form. He was the star of the line on A-Day, and looked fundamentally sound. With veteran Brandon Mosley on the other tackle spot, we'll do fine on the edges. The interior line played well on A-Day also. Auburn has more linemen competing this year, than the previous two. Competition is good. I think in the two past seasons, there was little doubt that Ziemba, Isom, Pugh and Berry were going to start. This year, no one's job is safe, and I think they'll push each other.

Going into A-Day, I was extremely concerned about the tight end/h-back situation. We figured Phillip Lutzenkirchen would be a big part of that equation, and he was the offensive star of A-Day. As far as lead blockers, I think we learned that Chris Humphries can do the job, and we have an intriguing option with 290 pound LaDarius Phillips. Still, it's a thin position. I think there's a lot of opportunity for incoming freshmen like Brandon Fulse and C. J. Uzomah to contribute immediately.

From the outside receiving corps, I was very concerned about dropped balls on A-Day. There's little question that Emory Blake is a proven product, and will do a good job this fall. We need more consistency out of the other guys. DeAngelo Benton looks pretty good running routes, and got open against tight coverage on A-Day. He's just got to work on those hands.

I can't wait to watch Michael Dyer and Onterio McCalebb run this fall. By all accounts, those guys are among the hardest workers on the team, and will be improved this season. This might be the best tandem in the league right now.

Quarterback is easily the most important position on most offenses, and we're not sure what to make of the current situation. I think that if you judged solely off of A-Day, Barrett Trotter was a much better quarterback. At least until he dropped the ball on the ground in the 3rd quarter. By all accounts, Clint Moseley has played well in practice. Do we take the coaches at their word that the two are pretty equal? Or do we worry that the coaches have doubts about both? Some folks insist that incoming freshman Kiehl Frazier will win the starting job this fall, others opine that it's impossible for a true freshman to pick up the Malzhan offense that quickly. One thing in Frazier's favor is that he ran that offense in high school. Malzhan had no problem starting Mitch Mustain as a true freshman at Arkansas. The Auburn coaches will play the guy who gives us the best chance to win.

It will be a new era starting at Auburn this fall, with a lot of new faces on the field. The Tigers will be looking to extend a 15-game winning streak in the opener against Utah State. I believe the record for consecutive wins was set back in 1993-1994 under Terry Bowden,with 20 straight wins. The Tigers can tie that with wins over Utah State, Mississippi State, Clemson on the road, Florida Atlantic, and South Carolina on the road. Should that be accomplished, Auburn could win 21 straight with a victory in Fayetteville. Can it be done? We'll find out! War Eagle!