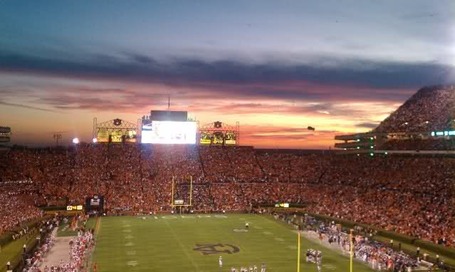 In this last couple of weeks we have witnessed some heroic events, and some frightening ones too. We have seen several things to be very proud of, and witnessed immense acts of courage. We have watched as tornadoes tore up our State, and our neighboring States as well. Our neighbors houses have been lost, or opened up as a relief shelter for those whose homes were destroyed. The world stood as a witness to Alabama vs. Auburn, as it morphed into Alabama and Auburn, together as one. Undivided, and unconquerable.

The world is rid of an evil, and hatred driven man. His name was Osama Bin Laden. Killed by an elite special task force known as "SEAL team 6". This unit was founded by an Auburn grad, but their actions were met with joyous thanks from most of the peace loving world. The demise of the face of terror around the world comes as a relief to many, and as justice to others. To most Americans, it came none too soon. Kudos to the Obama administration, which may be a first from this writer, for having the courage, and the wherewithal to give the approval of this sort of mission. Politics aside, it was the right move for America. War Eagle, Mr. President! War Damn Eagle, SEAL team 6!

In football news, there has been banter of former North Carolina State quarterback Russell Wilson possibly joining an SEC team. Seems Wilson was granted a release from N.C.S.U. because of a baseball heavy spring, which left no room for spring football. He was only voted team captain by the players, and  MVP of the Wolf-packs 2010 campaign. I smell unemployment coming for the head coach at N.C.S.U.

I don't see a need for AU to be considering this move for Wilson. Clearly any attempt to get Russell Wilson in an AU uniform would be the death knell of both Trotter and Moseley as to their future playing days at Auburn. That is just my opinion, and I would clearly hate to see that come to fruition, alas the coaches know best what to do, and I will defer to them of course. After all it is their jobs on the line, not mine.

More football discussion after the jump....

Judging by the responses, what few there are, Coach Chizik does not have to be reminded of the situation AU is in numbers wise, he would just say I told you "this is where we would be, at this point in time".

In recruiting news, Auburn landed two firm commitments recently, and lost one, or rather pulled one. Seems one of the best wide receivers in the State of Alabama, had been kicked off his high school football team, for unknown reasons, and subsequently, Coach Chizik pulled his scholarship offer to play at Auburn. I hate it for the young man, but lessons are sometimes learned in very difficult ways.

Auburn is leading or at the top for a host of top athletes, and for 16 and 17 year old kid's that's all you can hope for, until it comes time to make a decision of where to go and get an education, and play football. Once again our coaches have not focused on one single position, or person, more like trying to recruit a whole team, including specialty personnel. Whatever they are doing it is working.

Big Cat weekend is coming toward the end of this month, and several recruits have already suggested that they will attend. It is an invitation only event, but that hasn't stopped almost every single one of these high school players from requesting an invitation. Coach Trooper Taylor said it was the most asked question by potential recruits when he meets with them. The fact that so many want to be a part of this event, calms my worries about what it does to those who get left off the invitation list. Being invited must mean you have an offer if you so chose to accept it, being left off, means you must work harder to be among that group. That's how I see it anyway.

Auburn's coaches are doing things the right way, and the kid's and their parents see it. Despite all the negative press, Auburn and it's current coaching staff are making some positive impressions with these folks, and I could not be more proud of it.