"One of the Greatest Basketball Players in Auburn University History"

Share All sharing options for: "One of the Greatest Basketball Players in Auburn University History" 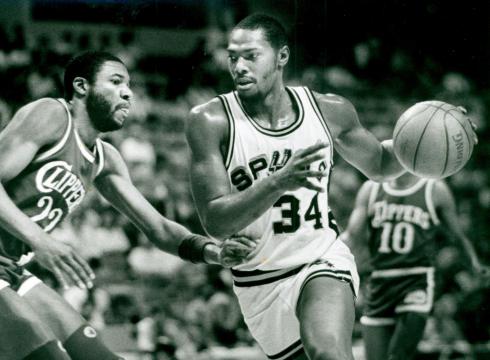 He was a tall skinny kid from Atlanta, Ga. who went on to become one of the greatest Basketball players in the history of Auburn University. Mike played ball for the Tigers in the mid to late seventies, completely rewriting the school's record books.

When he left Auburn in 1978, Mike Mitchell was Auburn's all time leading scorer and is still second on that list with 2,123 points trailing only Chuck Person (2,311). Even after 33 years his name sits at No.1 for the most career rebounds at 996.

He averaged close to 25 points per game his senior year, made All-American, and was a four time All-SEC selection. Dale Brown, LSU's legendary coach once said, “I don’t know how to stop him. We considered setting up a howitzer out there to stop his shots.”

Mike went on to have a 22 year professional career averaging 20 points per game.

Drafted in the first round by Cleveland in '78 he became an NBA All-Star. He was the Cavalier’s all-time leader in field goals made, scoring average and points scored in a season, until a kid who wasn't even born yet (Lebaron James) broke his records 20 years later.

He finished four times in the top ten list of the league's leading scorers. "You had to keep somebody in front of him and behind him all the time because he was so quick and so strong." said former Celtics star Quinn Buckner, "If he gets the ball down low, forget it; you can't stop his shot."

Mike's best years though were probably with San Antonio where he led the Spurs to two consecutive Midwest Division titles. Mitchell averaged 26 points and 10 rebounds in the 1982-83 NBA Western Conference finals against the Lakers' Magic Johnson and Kareem Abdul-Jabbar.

He finished his career in Italy and left the game at a time when many thought he still had some more years left in him. But when he retired he was quoted as saying, "Sometimes in life, you need to make a change and invest more in others and in your family."

And that's what Mike did for the past decade. He came back to San Antonio and worked in the San Antonio Independent School District with at-risk kids.

Mike was good at teaching kids how to achieve and more importantly how to overcome obstacles. He had overcame his share in life including a tough childhood and later struggles with substance abuse.

But this past Thursday, Mike succumbed to his final and toughest obstacle. He passed away in San Antonio from a rare form of lung cancer after a two year battle with the dreaded disease.

Spurs Head Coach Gregg Popovich said,  "He was a good man who cared deeply about his family and the community. As a basketball player, he was a star in Auburn, San Antonio, Cleveland, and Italy. At each stop in his distinguished career, he was a fan favorite thanks to his outstanding offensive skills and his humble, down-to-earth personality."

Auburn Athletic Director Jay Jacobs added, "Our hearts and prayers go out to Mike's family. We are extremely saddened at (his) passing. He was one of the greatest basketball players in Auburn University history."