Taking a Step Up.

Share All sharing options for: Taking a Step Up. 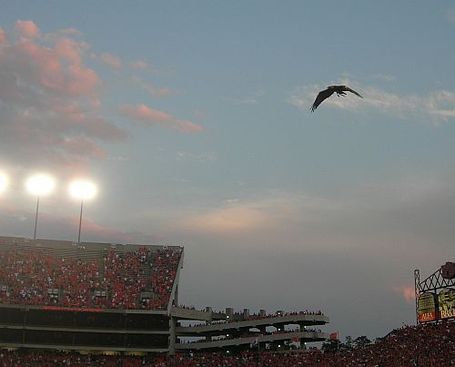 Nova flies over a not quite full house against USC.

The Auburn Family did not quite believe, yet.

War Eagle, everybody. In a great season, there are usually a couple of games where a team shows dramatic improvement. For Auburn in 2010, that game was the South Carolina game on September 25th. Prior to that game, I think few folks had Auburn pegged as a title contender. This post was inspired by a fabulous effort earlier in the week over at Team Speed Kills, the SBN SEC blog. It was quite interesting to read what a neutral observer took from the game.

That game was the first one I attended in 2010. It was a subdued gameday atmosphere, on a hot muggy day just like today. Tickets weren't terribly hard to come by, and there were a number of empty seats in the upper deck that day. I spoke to a number of Auburn fans around town, and the mood was definitely apprehensive.

Auburn's first three games gave few indications that Auburn would be able to go undefeated. The Tigers had given up 26 points to Arkansas State. They had been just a few dropped passes from losing to Mississippi State. Against the Clemson Tigers, Auburn had been flat-out manhandled for much of the evening, and won the game when Clemson's kicker missed a field goal in overtime.

South Carolina's resumé prior to that point was fairly impressive. The Gamecocks had dominated Southern Miss in the opener, then shut Georgia down the next week. After a tune-up game against Furman, Auburn expected to get the Gamecocks' best effort.

There were quite a few matchups that didn't look to be in the Tigers' favor. The Gamecocks were leading the league in sacks, and the offensive line had looked downright shaky at times. The Auburn offense was still looking for a consistent running threat besides quarterback scrambles. On defense, things were even more worrisome. Clemson's running game had done damage the week before, and South Carolina was bringing in heralded freshman Marcus Lattimore. The Gamecock receivers towered over a small set of Auburn corners. With veteran quarterback Stephen Garcia running the show, it was going to be tough to stop the Gamecocks.

Game recap, after the jump!

Carolina received, and spent the first drive trying to get Lattimore loose on the ground, to little effect. After a Spencer Lanning punt, Auburn ground out one first down, then Cam Newton kept up the middle, dodging tacklers and weaving to the sideline. From there, Newton turned on the jets and launched himself the final 21 feet into the endzone head first. Auburn scored first to take a 7-0 lead.

South Carolina sent Lattimore out in the flat for much of the next drive, where Auburn was struggling the most on defense. The Gamecocks had success outside, and on the draw, before Garcia ripped one down the field to wide open Alshon Jeffery for a 30 yard score. The game was tied at 7.

Auburn's next drive lasted only 3 plays, as Mario Fannin fumbled the football and the Gamecocks recovered on the Auburn 44. Passes from Stephen Garcia to Tori Gurley and Alshon Jeffery moved the chains, then Lattimore smashed in for the final yard. Carolina led, 14-7.

The teams moved into the second quarter trading punts, then Auburn turned it over again on a fumble by Michael Dyer. South Carolina had it at the Auburn 47, and moved from there. Again Garcia picked on defenders in the flat, hitting Brian Maddox and Alshon Jeffery. A key completion to fullback Patrick DiMarco converted a 3rd and 8. Then on 3rd and goal from the 6, the Tigers were helpless to stop a floater to Alshon Jeffery for the score. Spencer Lanning missed the PAT, but South Carolina led 20-7.

Jordan Hare Stadium was awfully quiet at that point, other than a few jubilant South Carolina fans across the way. I remember turning to TrackEmTigers.com writer War Eagle Atlanta, who was sitting next to me. I remember remarking that our offensive line was killing them up front, and all we had to do was quit fumbling, and trying to force the ball downfield against cover-two.

On the next drive, Auburn proved me right on a season-saving effort. Newton hit Darvin Adams on short passes a couple of times early in the drive, but it was a 22-yard draw to Onterrio McCalebb and hard nosed plays on the ground that got Auburn going. The Tigers moved 76 yards in 12 plays, and Newton carried it in from the 1. Auburn had cut the lead to 20-14. A holding penalty backed USC up on the kick return, and they let the clock run out on the half.

Auburn continued the relentless assault on the ground in the second half. Auburn's first drive bogged down on a missed field goal attempt, but the Auburn defense came up with a stop when a corner blitz from Demond Washington took down Garcia on a sack.

After a towering Spencer Lanning punt, Auburn took over on their own 20, and went on an 11 play, 80 yard march. Cam Newton capped the drive on a 4 yard run, and Wes Byrum put Auburn ahead with the extra point, 21-20.

It did not take long for South Carolina to re-take the lead. Somehow, the Tigers forgot to cover Alshon Jeffery, and Garcia found him for a 69 yard catch and run down to the Auburn 6 yard line. Two plays later, Garcia flipped an easy scoring pass to Tori Gurley. South Carolina was back on top, 27-21. All that quick drive did, though, was put a tiring Carolina defensive front back on the field quickly.

Auburn again pounded the ball down the field, surviving a fumble by H-back Eric Smith in the flat. The Tigers ended up 4 and goal inside the one yard line, but were moved back on a strange false start penalty. From there, Wes Byrum missed the chip shot field goal, and the Tigers had nothing to show from a 17-play drive.

Stephen Garcia gave Auburn the ball right back, coughing it up when he was cracked by Darren Bates. T'Sharvan Bell jumped on the loose ball, and Auburn had it back! This time, Newton and the Tigers finished the drive on a 7-yard throw-back pass to Phillip Lutzenkirchen. The Tigers were back on top, 28-27.

Garcia was determined to atone for his mistake, carrying the first two plays of the next drive and picked up the first down. The Gamecocks reached the Auburn 43, then Garcia was sacked by another all-out Auburn blitz. Again, Garcia coughed it up, and Auburn had it at the 47, with 10:16 left in the game!

Auburn got going on a 9-play march. Onterio McCalebb, Michael Dyer and Cam Newton all moved forward and picked up first downs. The score came on a screen pass to Emory Blake. Hit behind the line of scrimmage, Blake refused to go down, and left several fallen Gamecock defenders in his wake, powering in for Auburn's 5th touchdown. The Tigers had a 35-27 lead with 6:23 left in the game. Could they hold it?

In one of the more inexplicable coaching moves I saw in 2010, South Carolina coach Steve Spurrier yanked starting quarterback Stephen Garcia, and replaced him with true freshman Connor Shaw. In the stands, we didn't even realize it. All eyes were on the shaky Auburn secondary, and we were wondering what coverages would be called.

The answer was soft-cushion zone, which allowed Shaw to complete several easy throws to the flat to move the chains. Carolina drove it relentlessly down the field, but Shaw doomed the drive when he floated one over the middle into Tampa-2 zone. Auburn's Josh Bynes was hiding deep, and picked it off.

Three Cam Newton keepers left the Tigers a yard short, so they punted it back to Carolina with 1:27 left in the game. Shaw moved South Carolina down the field again, but the Gamecocks had no timeouts left, and the clock kept running. From the Auburn 18, Shaw lofted a desperation pass to the left end zone for triple-covered Alshon Jeffery. Zac Etheridge made the perfectly timed hit, and Demond Washington came up with the diving interception to end the threat.

The Tigers had survived, 35-27. The score was not really indicative of story in the trenches. Auburn had run the ball for 334 yards, on a 492 yard offensive day. Vaunted freshman Marcus Lattimore was held to 33 rushing yards. True freshman running Michael Dyer had cracked the 100 yard mark, to go along with Cam Newton's 176 yards. This began a string of SEC games in which the Tigers rushed for more than 300 yards.

Against South Carolina, this Tiger team went from one that got pushed around, to one that dominated the opposition up front. It was a dramatic change. The Tigers had beaten a pretty sound bunch. Carolina would go on to convincingly defeat number one Alabama, and win the SEC East. The two teams would meet again in Atlanta, when it was all said and done.