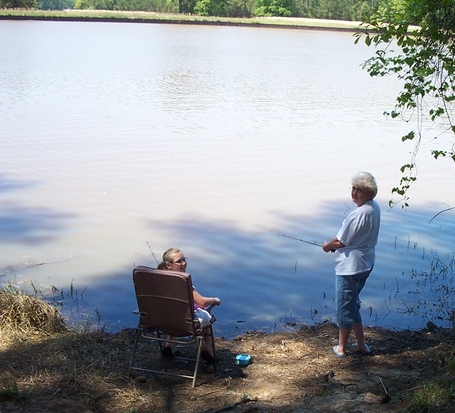 fishing for the right recruits...

Here it is, it's getting near the end of June, and we are talking about recruiting for Auburn's football team. Amazing as that sounds, it's a trend that has been pushed by the immense pressure of winning in the biggest conferences. In an interesting report earlier this week, Jay G. Tate posted this..

Will Muschamp told me before the 2007 season that early commitments soon would become the norm — and he was on-target with that comment. That’s nothing new for him.

The SEC has changed the signing rules, as many of you know, and this is just one side effect of those changes.

Early commitments are, in fact trending earlier, and there doesn't seem to be an end in sight. There are probably several reasons for this. We'll discuss a couple of them, and the apparent "shock" that Auburn is in the thick of it.

It is this writers belief that the major cause of the early declarations from high school players stems from the pressure and attention thrust at them by the recruiters. Recruiters, of course, who wish to have these young men playing at their respective schools.

A 16 or 17 year old is no more ready for that pressure than a "Tonka Truck" is for 2 tons of debris from a salvage operation. Yes some are more mature than others, although I'll wager that none are ready for all they are about to experience.

Add to that pressure, and the need to insure academic qualifications, and suddenly, a high school "star" has to focus on his grades too! This is one area where I applaud the NCAA. Very strict academic standards is in a way holding high school teachers accountable for their abilities to prepare our young kids for the real world. I do understand the broader social implications here, and that this is a sports blog, so that is as far as I will delve into that subject here. Still, it's a much needed part of collegiate athletic model.

Now with the lower signing numbers implemented by the SEC starting with this next class of recruits, and the need for quality and educated athletes, these new standards have an added pressure to insure these universities get the right kids. Putting more emphasis on high school athletes to get good grades, and keep them. A huge plus from one aspect.

The more mature H.S. players also understand the distractions involved with the recruiting process, and how it effects their family, preparations for their last H.S. football season, and their team mates. Not wanting to be bothered by all the recruiters from the schools where they won't be going, I suspect many will say to the recruiters, "stop bothering me, I'm choosing...."  I'll insert Auburn here because it leads me into my next point.

The big shock, that frankly, many of the supposed "big boys" are having a really difficult time grasping, is that Auburn is right in the thick of things recruiting wise, and it has caught a ton of people by surprise. Repeated attempts at discrediting our school have fallen woefully short, continued media slandering has been debunked by the truth, and even the attempts of sleazy journalists have been met with ire of the AU faithful, who by all standards are doing things the right way.

Mack Brown, the head coach at Texas, may be the only person in the industry to not be surprised by Chizik and his efforts. To say Chizik has turned things in a different direction at Auburn is like stating that your all-time favorite food is just "okay".

It started well before the BCS MNC, and continues to this day. That is something I am growing increasingly comfortable with.