Russell Wilson Commits to Wisconsin. Now What, or No Sweat?

Share All sharing options for: Russell Wilson Commits to Wisconsin. Now What, or No Sweat? 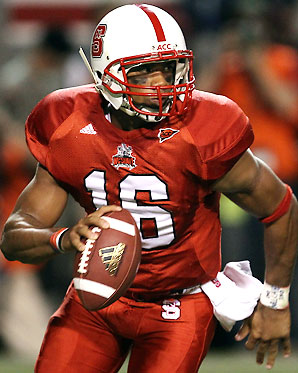 Former NC State QB Russell Wilson commmitted to play at Wisconsin yesterday after a much deliberated decision between continuing minor league baseball and playing for us. Okay, I'll admit it. I really wanted this kid. I know the fan base was torn about what sort of impact he would be able to make right away under Gus Malzahn's offense, but I think he had all the tools to make it work. But with only one year of eligibility left, the best he could be would be to serve as a virtual stop-gap at the QB position until some of the highly recruited underclassmen can be brought up. While many fans couldn't have cared less if he signed with us, I wanted him real bad, but still don't think we're any worse off than where we were. More on that later.

I know it seems apparently real common with Jerimiah Masoli at Ole Miss last year and with Wilson announcing on Monday, but college football's equivalent of a free-agent doesn't really happen that often. For these kids to transfer out and play immediately, they must already have earned their undergrad diploma, which face it, even I managed to accomplish in five fall seasons worth of schooling. Naturally, the only red-shirting I received was taking a light class load during three summer quarters, which is probably the non-athlete's equivalent, but I digress.

The sore loser Tiger fan might claim that Wilson's style wasn't suited for us anyway. If that's true then why was Auburn in the running in the first place? Admittedly, I had never heard of him until this spring in spite of the big numbers he ran up last year. I guess that shows what ACC football means to me, but after watching some highlights of what the guy could do, I did see a little more agility and speed at the position than I've seen on the Plains in a long time (other than you know who).

Auburn was more than the hottest name at the moment, we were a legitimate fit and I'm glad he considered us. In the end, I guess that Wisconsin proved to be a better one--either that (or what an Alabama fan might claim), that Auburn couldn't raise enough cash to out-bid Major League Baseball for his services. Regardless, we shouldn't look at it as a black-eye for the program. Unless he was also considering Bammer.

But if you're Barrett Trotter or Clint Mosely or even Kiehl Frazier, do you think you dodged a bullet or were you never worried about the competition? I'd say the latter for them, but even more important, what do the fans think? The consensus of opinion among us is that the program is sorely lacking in the QB position and that we're almost ready to just amortize the next season in order to bring along the next crop of Cam clones like Frazier and Zeke Pike. Uh, not so fast my friend.

Worrywarts read into the lack of naming a QB starter coming out of the spring as another sign that we've fallen off the cliff in talent there. Hey, we had the same thing last spring, with no starter named, but only a fool wouldn't believe that refusing to name Cam Newton the man after him completing just a few practices was anything other than a ploy to keep him off the rest of the conference's radar. With that being said, I still think that Barrett Trotter gave him a good run for his money (no pun intended) and is my prohibitive favorite for this season at the moment.

The point is that Auburn doesn't have to announce a starter yet. Why lock yourself in when you have the likes of Frazier coming in? Don't get me wrong. I put precious little stock in true freshman QBs waltzing into the SEC and having any level of success as rookies. Very few players even with years in a program can come in their inaugural year and light things up. I remember when Kodi Burns was a true freshman and playing. Many Auburn fans pinned all their hopes on him. The rawness of his inexperience soon showed the reality. Regardless, there is one thing that Frazier can accomplish immediately--to hone the competition between Trotter and Mosely to make the coach's decision a little easier.

After basically one year of Chris Todd at the helm full-time in 2009 and one year of Cam before dashing off to the NFL, Auburn fans are thirsting for more longevity in that most vital of positions. If it comes down to Trotter and Mosely, one of them will have the chance to play the position for a minimum of two years (three for Mosely) and that's really all you can ask for these days in this conference. Yes, we do have the young guns coming up. Both Frazier and Pike have even me excited, but we got the crystal football not the crystal ball. We're going to have to wait before we see how these guys turn out. We'll have to consult Acid Reign on this fact, but I can't remember the last time an Auburn QB with a year or more experience as the starter lost his job permanently. Something to think about.

Don't worry, Auburn fans, and believe me. Just because a highly touted QB like Wilson was courting us doesn't mean we are weak at the position. We're not. Trust in your coaches and the program. Maybe we're all victims of Cam's success last year and are doomed to forever hold him as the yardstick to which all future quarterbacks must be measured. I once heard a Bama fan call Newton a freak, and he was right. But he was also just a streak--gone too quick. Let's get over it and give these successors the props they need and deserve.

With our recruiting machines running 24/7, our next freak is either on the way or already on campus. And  I'm not ready to concede a damn thing to anyone next year. Auburn must be dethroned from atop the SEC and the nation. And if you're short-selling Auburn based on one position, I'll take some of that action. See ya in the fall!