Share All sharing options for: AU Roster Features A Lot of New Faces 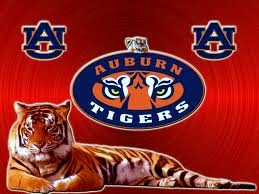 Auburn's incoming freshman class will be one of the most anticipated of any that has ever graced the field at Jordan Hare Stadium. By all counts, there is a plethora of talent in Auburn this fall. The rub is that few have actual game day experience, and of the ones that do, only a handful have meaningful minutes against SEC competition.

Let's take a look now at the Redshirt Freshman, and true Freshmen that are expected to take the field in defense of Auburn's second National Championship.

The game is won or lost in the trenches, cliche, I know, still The line of scrimmage is where games are truly won or lost. The Tigers are replacing a veteran line that consisted of four Seniors, starting at the left tackle position, and continues all the way thru the right guard. Only right tackle Brandon Mosley returns. Auburn has recruited some of the highest rated offensive linemen the last two classes, and they will have to play up to their potential quickly for the Tigers to have a successful campaign in 2011. The Redshirt and true Freshmen here are -

*Coleman probably won't play this season, due to his ongoing cancer treatments and recovery.

Fair, or not, this will be a test for Jeff Grimes. Getting a starting five with some quality depth will be paramount. With the schedule that Auburn faces, these guys need to be ready from day one, and avoid the injury bug, or it will be a long season for us Tiger fans.

In the offensive backfield there won't be a large number of fresh faces, although Mike Blakely, and Tre Mason are expected to contribute some. Both are true Freshmen.

The wide out position in Gus Malzahn's scheme is another place where we could see a tremendous amount of playing time for the new kid's on the block. Here are the names of those young men-

Coach Trooper Taylor has shown he is excellent at his position on this staff, even if he has missed the mark on his prediction, that DeAngelo Benton would break some Auburn records in his time on the Plains. Matching the down field blocking skills, of Kodi Burns, Darvin Adams, and Terrell Zachery will be priority one, and his biggest test this season as Auburn's receivers coach.

We will look at the defense after the jump.

Replacing the production of Nick Fairley, Zac Clayton, Mike Goggans, and Mike Blanc, would seem to be an impossible task. Complicate that with a coaching change here, and this becomes the most questioned part of Auburn's entire team. Remembering that games are won and lost on the line of scrimmage, and the anxiety levels skyrocket in this area.

Mike Pelton, the only newcomer on Gene Chizik's staff, has said all the right things, and Coach Roof, seems pleased with the hire, so let's look at the newcomers on the defensive line.

At linebacker, we have no less than 5 newcomers, and possibly a sixth. This position will be a key one for recruiting for the 2012 class. The loss of Jessel Curry as a transfer, may not be as significant this season, as it will going forward into next season, and beyond. So, let's look at our incoming linebacker class -

** Frost is listed as an athlete, and during his recruitment, the coaches promised him a chance at WR. It is however a consensus opinion that he will play LB at AU.

If Auburn's defense had an Achilles heel last season it was at the defensive back position. Between, inconsistent play, injuries, and a lack of cohesiveness as a unit, there were more breakdowns in this part of Auburn's game, than all the others combined. That is this writers opinion, anyway.

Consistency, and improved technique did manifest itself throughout the course of the season, and the problems were never from a lack of effort. They were what they were, and that was frustrating.

One thing is for certain, this staff has put in a tremendous effort to upgrade the quality, and depth at AU, and this season, it should pay off in a big way. Let's meet the newcomers -

On special teams, there aren't any new names to add. Saying goodbye to Wes Byrum was a tough thing to do, but alas Auburn's all time points scorer has moved on, hopefully to an NFL career. Cody Parkey will taking his place, and the punting job is yet to be won. Much as the QB position, we may not have an answer until just a few days before kickoff.

In an interview with ESPN's Chris Low Coach Chizik had this to say.

"Our guys are hungry. There’s no question that they’ve really, really worked hard in the last four months or so since January. It’s really been a joy for me to watch, guys coming back and getting back into it that fast, being hungry and being excited about competing and trying to win a job. That’s where we’re at."

and further in the interview he said this.

"It’s different for us," Chizik said. "What you’re going to see at Auburn is a lot of new faces and a lot of new names. We’ve got guys just fighting for jobs continuously on our roster".

In less than sixty days the Tigers will begin fall practice schedule, and two-a-days. Are you ready for some football?