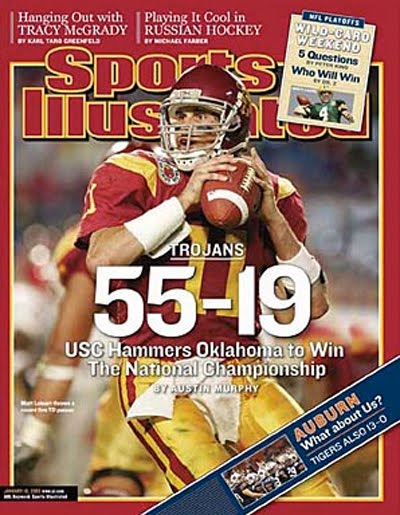 Vacation, all I ever wanted, Vacation, had to let it get away

With the final appeal by USC against sanctions resulting from the Reggie Bush Incident (RBI) denied by the NCAA on May 27th, the BCS came out today and stripped USC of their 2004 national championship. Duh, some of you might say, this happened over a year ago. Actually, it didn't. After sanctions were handed down last June, USC mounted an appeal of the case, one which took almost a year to complete. Initially, the BCS remained mum on the subject as they were content to allow the appeals process to run it's due course. The AP Poll said that regardless, USC was their champion and that they would not revote. Only the Football Writers Association of America, arguably the 3rd highest ranking MNC selector, opted to immediately vacate USC's crown they had awarded for that year.

"The BCS arrangement crowns a national champion, and the BCS games are showcase events for postseason football," BCS executive director Bill Hancock said in a statement. "One of the best ways of ensuring that they remain so is for us to foster full compliance with NCAA rules. Accordingly, in keeping with the NCAA's recent action, USC's appearances are being vacated.

So where does that leave us now? The BCS has elected to have the 2004 national championship remain as vacant as Detroit real estate, as has the FWAA, and the AP still lists USC as their champ. All of this makes things about as awkward as Father's day at the Schwarzenegger house.

I KNOW I said I'd never bring the subject up again, because my opinion on the matter has been known for many years and many of you think I talk about it ad naseum. But the fact of the matter is this: given the tremendous ambiguity of MNCs in CFB in the past, a national championship in FBS is simply too big a void not to be filled. Who cares about the BCS and the AP? Their are 30 something different selectors in a given year and we got some votes, so screw it, let's claim it.

Jay Jacobs needs to come out next week and say very respectfully that Auburn University, having received votes as champion in 2004 by some of the multitude of entities in the national championship picking business, will now openly claim that year as a national championship given that the previous commonly recognized recipient was forced to vacate it. Additionally, I'd like some language inserted that we scored the basic template for such moves from our cross-state cousins, but that might not fly right now given the soreness some Tide fans are still feeling from the previous MNC we just won in January.

At least Tubs is on my side. "Yes, someone should be awarded the title. If not, the team that had to forfeit is not really punished." Tuberville still may have a retroactive $300k bonus riding on Auburn's decision if they claim it, a provision in his contract at that time.

So far, Auburn officials continue to remain mum on the subject, but give them some time. Maybe they're taking a liking to this whole national championship thing and may come around yet.

Chizik deflected the subject last year when asked about it shortly after USC was forced to vacate games: "That was a great team and a great year for us and it always will be here at Auburn. And I was blessed to be a part of that. That'll never be taken away," he said. Anybody else think that Chiz is a little sappy from time to time? I'd bet dollars to donuts he may be feeling a little different now.

Many things could result from this decision today. If the Camtroversy was ever proven, Auburn could have it's BCS title stripped. Luckily the AP would probably have our back though, and we'd still have a superior claim than half of Alabama's titles.

I dunno, Auburn family. Auburn getting shafted in 2004 might have actually been the best thing to ever happen to our conference, as the dividends of guilt helped propel the conference winner into the BCS title game two years after that for five straight years and subsequent straight victories. Do we want to trade-in that goodwill for the certain scorn we will earn from the jealous eyes staring from across the southeast? Florida in 2006 and most certainly LSU in 2007 were the biggest beneficiaries of the BCS guilt of leaving Auburn out and they would most likely be some of the biggest howlers right along Alabama if the Auburn Tigers did indeed hoist up the flag as 2004 national champions.